Trae Young was masterful (32 points, 10 assists) in helping Atlanta steal Game 1 at MSG on Sunday. He'll look to repeat that performance and put the Hawks up 2-0 in their best-of-seven series against New York.

Trae Young’s fourth-quarter dominance, including a last-second floater, helped the Atlanta Hawks earn a 107-105 Game 1 victory over the New York Knicks at Madison Square Garden — and thrust him immediately to the top of New York's most wanted villains.

Game 2 will be at MSG again on Wednesday and the Knicks will be desperate to win, currently sitting as 2-point NBA betting favorites.

Will Atlanta find a way to steal yet another game on the road, or will the Knicks even the series heading to the ATL? Find out our thoughts in our Hawks vs. Knicks picks and predictions for May 26, with tip-off set for 7:30 p.m. ET.

Reverse line movement is showing up for Game 2 between the Hawks and Knicks. New York opened as big as -2.5 at home but has been moved as low as -1.5 at some books, despite FanDuel reporting 80 percent of bets riding on the Knicks and 85 percent of the spread handle on the home side as well. The total opened at 214 points and is down to 213. However, 81 percent of total bets and 86 percent of the money is siding with the Over.

The Hawks are 4-1 ATS in their last five games following an ATS win. Find more NBA betting trends for Hawks vs. Knicks.

The Knicks held a seven-point lead with just about a minute to go in the third quarter of Game 1, but the Hawks came back rather quickly.

The two then traded blows in the fourth quarter but it was ultimately a Trae Young floater that ended up silencing the crowd and giving Atlanta the 1-0 series lead. Young mocked the fans at Madison Square Garden after the game, and this series should be extremely intense moving forward.

While the Knicks are the team that needs this game more, it’s hard to ultimately pull the trigger and go against the Hawks in this one. For starters, all of the early action was on the Knicks for Game 2, yet the oddsmakers didn’t seem too concerned about it. They’re fine with the public hammering New York in what is essentially a pick’em game.

Another thing that stands out here is that the Hawks really defended Julius Randle well in Game 1. It wasn’t just a matter of the Most Improved Player missing good shots: Atlanta kept showing help against the lefty, forcing him to go to his right hand or make the right read — and that just didn’t happen with Randle shooting 6 of 23 from the floor and having only four assists to three turnovers.

Nerlens Noel’s health is also a big factor coming into this game. Noel did not play in the final minutes of Game 1 after rolling his ankle but seems likely to play tonight. If he’s even a step slower, however, the Hawks will have more success attacking the rim. Noel has been one of the best defensive anchors in basketball this season, so it’s important that he’s at 100 percent health for New York.

It took a 68-point fourth quarter for these teams to even come close to hitting the Over in Game 1 and it would be surprising if this isn’t yet another Under in New York.

The Knicks aren’t going to come into this game with the goal of scoring more in order to come away with a 1-1 series heading into Atlanta. Instead, New York will try to clamp down even harder on the defensive end and the team might play at an even slower pace.

The Knicks had some explosive offensive moments at times in Game 1, but Tom Thibodeau would rather see his team play the bruising style it did during the regular season for an entire 48 minutes.

After the comments Young made after Game 1, all eyes are going to be on him in this one. And while fans are going to determine how good he was based on how many points he scores in Game 2, there’s also a good chance the Knicks overplay his scoring ability, too.

Young is a special scoring talent but he is equally as talented a passer. If New York looks to do something extra to take him out of his game, Young will dissect whatever it is and find his teammates.

He had 10 assists on Sunday and it wouldn’t be surprising if he has double-digit dimes again tonight. 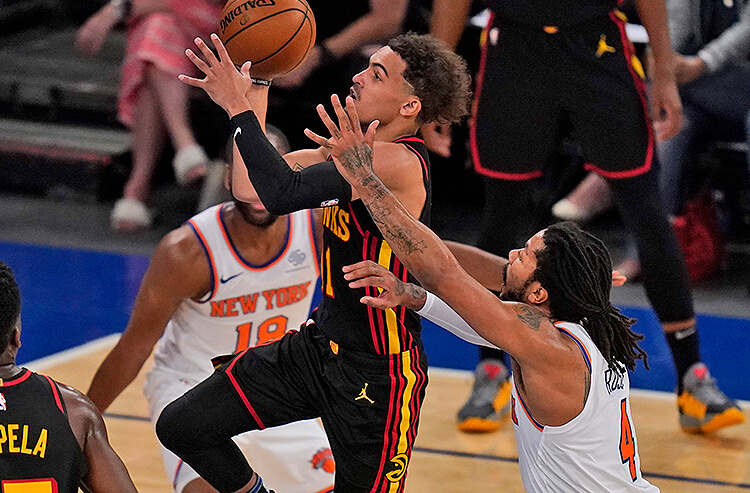 Hawks vs Knicks Game 2 Picks and Predictions: Trae Young's Dominance Makes It Hard To Fade the ATL
Provided by