The Warriors have been crowned champions yet again, capping a whirlwind NBA season. With one foot leading to the offseason already, here's a recap of what's happening around the league, from GSW to the trade markets, and upcoming NBA Draft.

The Golden State Warriors are champions, which officially makes this the last edition of the NBA Betting Notebook for the 2021-22 NBA season.

But although the on-court action is all wrapped up, the NBA offseason is just beginning. Let’s dive in.

In the end, there can be only one. The Golden State Warriors defeated the Boston Celtics 103-90, seizing control at the end of the first quarter and never letting go. Steph Curry has now won four titles, and at last, captured the elusive Bill Russell Finals MVP missing from his trophy collection. The Warriors were +1,000 to win it at all before the season began, a distant fourth behind the likes of the Los Angeles Lakers and Brooklyn Nets.

The Golden State Warriors are NBA Champions for the fourth time in eight years ????

After LeBron James won his first title in 2012, ESPN’s Kevin Arnovitz wrote an article called “LeBron James and the end of all that”. The doubters were put to rest, the narratives were dead, and greatness was forced to be recognized. So too, now, with Steph. While everyone already agreed that Steph was a superstar, there was still the chorus of those who believed he’d never have won again without Durant, that he wasn’t good enough to carry a team, and that his lack of a Finals MVP was an indictment of his game.

But this performance, on the biggest stage against the league's best defense, puts an end to all that. Curry averaged 31.2 points, 6.0 rebounds, and 5.0 assists on 62.6% true shooting. They had nothing for him. The refrain from Steph and the Warriors in the locker room after the trophy ceremony was “What are they gonna say now?”

What indeed. He’s not just the best shooter of all time, he’s in the group with the one name guys like LeBron, Magic, and Michael. That’s it. That’s the end of all that.

The first 2022-23 NBA championship odds dropped at FanDuel shortly after Golden State won Game 6. The Warriors naturally open as favorites to repeat at +450, but it is going to be a bloodbath. Not only should rising teams like the Boston Celtics (+650) and Memphis Grizzlies (+1,900) be back and better than ever, the Milwaukee Bucks (+750) are likely to be right back in contention with their core healthy.

Then there’s the Los Angeles Clippers (+850), who steadily loaded up on role players to fill out a team for when Kawhi Leonard returns next season. With Kawhi and Paul George at the helm of a roster of quality contributors, they might well hoist the Larry O’Brien next season.

But the best value on the board likely lies with the Denver Nuggets, who are getting +1,700. Two-time MVP Nikola Jokic should finally have his running mate Jamal Murray back, and Michael Porter Jr. as well. They’ll compete for the best record in the West, and although bet down quickly from their opening of +2,200, are still great at this price.

In the first major trade of the offseason, the Dallas Mavericks acquired Christian Wood from the Houston Rockets for the 26th pick as well as Boban Marjanovic, Sterling Brown, Trey Burke, and Marquese Chriss. The players are just to make the salaries work, however, and this is all about the Rockets creating room for Alperen Sengun and whoever they draft next week in the frontcourt while picking up another pick for their trouble.

The Houston Rockets are finalizing a deal to trade Christian Wood to the Dallas Mavericks, sources tell @TheAthletic @Stadium.

Wood is a polarizing player. His defense is seriously lacking, and he’s had multiple chemistry-related issues at his prior stops and was even suspended by the Rockets this season. But he’s also never played on a good team, and his offensive fit with Luka Doncic is sublime, as they haven’t had a center who can both stroke the outside shot and roll and dunk until right now. It’s also a low-risk gamble for Dallas, who need to find creative ways to upgrade around Doncic.

Jake Fischer of Bleacher Report has been dropping regular trade and free agency insights as the offseason gets ready to begin in earnest. The latest concerns one of the most critical negotiations currently taking place in the NBA: what exactly will happen between James Harden and the Philadelphia 76ers. The Sixers broke the bank in a midseason trade for Harden, but despite strong play initially, he looked like a shadow of himself in the East playoffs.

James Harden is expected to re-sign with the Sixers on a shorter term deal at the start of free agency, per B/R’s @JakeLFischer pic.twitter.com/D609GjZCeY

Reportedly, Harden is going to opt into his hefty $47 million player option and then extend for 2-3 years with Philadelphia on top of that. That’s good business for both sides, as the Sixers have nothing they can do but hope Harden returns to form with a summer of rehab, but going five years out for a guy who might be nearing the end of the line would be a disaster. The Sixers open at +1,600 to win the title next year, which seems a bit optimistic to me.

The 2022 season isn’t even dead and buried yet, but already the eyes of the league turn to the NBA Draft on Thursday, June 23. The three bigs, Jabari Smith, Chet Holmgren, and Paolo Banchero, are slated by nearly every mock draft to go in the Top 3 in some order, with Smith having the best NBA Draft odds to go No. 1 overall to the Orlando Magic at -165.

Prospects for the 2022 #NBADraft presented by State Farm give their own current NBA player comparisons! pic.twitter.com/xlZ36sg6LM

For my money, Jabari is the third-best prospect of the Jabari, Chet, Paolo trio and it would not shock me if the Magic have a change of heart by draft day. While Chet might not be the offensive creator the Magic are looking for, Banchero absolutely is. Paolo is a strong interior scorer with serious passing acumen and is a good enough shooter to play pick and roll. Smith has a high floor as a sweet-shooting big man, but he’s not a primary initiator like Banchero, so getting Banchero at +2,000 to go first overall has some appeal to me. 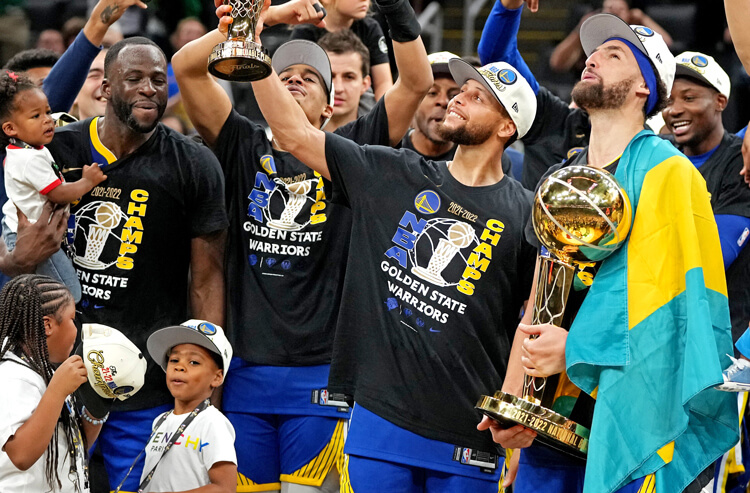