Read This Analysis Before Making Your 2021 NBA Regular Season Bets

Are the Knicks for real, will the Thunder surprise? Answers to these questions and more below in our 2021-22 NBA betting preview.

The 2021 NBA regular season tips off on Tuesday. Bettors are getting their season totals and futures bets ready. We provide some intel on some trends taking hold in the NBA right now.

The Knicks: Same but different?

The city and its fans are buzzing that Knicks basketball is rising and back on the menu. Last year, Tom Thibodeau was named the head coach of the New York Knicks and led the team to 41 wins (20 more than the previous year) and ended a seven-year playoff drought, but is Knicks basketball back?

Thibodeau brings a coaching approach that inspires quickly but tires out over time. In his first head coaching gig, he led the 2010-11 Chicago Bulls to a 62 win season — a campaign that was 21 wins better than the year previous, was headlined by Derrick Rose’s MVP win, and led to an Eastern Conference Finals appearance. However, it was all downhill from there. For the remainder of his tenure, he only reached the 50-win mark once more and only won two more playoff series.

In his next head coaching venture, he took over the Minnesota Timberwolves, who were coming off a 29-win season at the time. After a 31-win mulligan season (Zach Lavine was out for half of the season), the T’Wolves traded for Jimmy Butler (who had played for Thibodeau in Chicago). With lofty expectations, the Wolves would reach 47 wins before a brief first-round exit. In the following year, tensions grew between Butler and Thibodeau, and early struggles led to Minnesota trading Butler and Thibodeau being shown the door during the season.

This isn’t necessarily a recommendation to fade the Knicks early and often. This team has added some veteran talent (Kemba Walker and Evan Fournier), while Thibodeau is also emphasizing an increase in three-point volume. The real recommendation is that there will be a point where things start falling apart for the Knicks. It will be critical to identify when that happens (whether it’s very early on or later in the season).

Speaking of three-point volume, Owen Phillips notes that changes in three-point attempt rate in the preseason correlate heavily with the three-point rate in the regular season (and the eventual postseason). This is true both on a league and team level.

The Oklahoma City Thunder are a team to watch as they have possibly moved away from tanking, at least in the in-game approach. So far in the preseason, the Thunder are shooting threes at a 47.9 percent rate, which is:

2. A rate that would have been second-highest in last year’s regular season.

For this reason, it may be an excellent look to back the Thunder on moderate to large spreads, as high three-point rates lend their hand to keeping games closer. It may also be worth backing the Over in their games (they also ranked 24th in defensive rating last season and haven’t added much on that end).

On the opposite end of the spectrum, Jason Kidd has begun his tenure as the Dallas Mavericks head coach by denouncing the three-pointer:

"We’re not just going to rely on jump shooting because that can leave you at any part of the season or in the playoffs. If that happens, you don’t have anything to fall back on, and that means an early exit."

That is going to be troublesome for a team that is already lacking in talent. Yes, Luka is an incredible player and is likely to be a top-end elite talent for the next decade. But outside of him, if the main argument for success and improvement is “We have a healthy Dwight Powell,” or the yearly “Porizingis looks good in camp” report, it might be time to pump the brakes on the Mavs and back the Under 48.5 wins for the season. And, like with any wins total bet, it’s good to complement that with subsequent fades against the spread on nightly slates.

Who are the next Suns?

That’s enough pessimism; let’s shift gears. Every year, one or two teams rise out of nowhere to the top half of their conferences. Some of the more memorable ones we’ve had include the 60-win Mike Budenholzer Atlanta Hawks team in 2015, the 50-win Utah Jazz team in 2016, the 60-win Milwaukee Bucks team in 2017, the surprise five-seed Chris Paul-led Thunder in 2019, and of course, the surprise two-seed Phoenix Suns from last year that made it to the NBA Finals. So who will surprise us this year?

Before we get to a more exciting answer, is it possible that it’s just the Suns again? The Suns win total sits at 51.5 after winning 51 games last year in a shortened season. They finally figured out the Ayton piece last year, still have a very young Devin Booker, and have an endless cast of players who can give more (Mikal Bridges, Cameron Payne, Landry Shamet, Cameron Johnson, and Jalen Smith). Giving this roster ten more games to win one more game seems like a great bet. If you’re feeling froggy and like the upside, you can also back them at +1,000 to have the best record in the NBA.

If we want to look elsewhere, the Memphis Grizzlies have a formula that matches typical surprise teams. The Grizzlies have a budding superstar in Ja Morant, a veteran leader in Steven Adams (more on him later), a supporting cast full of budding potential and developing youth (Dillon Brooks, Desmond Bane, Tyus Jones, Brandon Clarke). Possibly most importantly, Memphis has a guy with massive upside in Jaren Jackson Jr.

Yes, health has seemingly been an issue for him in all of his three seasons so far. But if JJJ can stay healthy, this season sets him up beautifully to finally show off his capabilities. Steven Adams (and second-year Xavier Tillman) can play the five, whereas, in previous years, Jackson was often asked to fill that role which muted his full complement of skills. . Jackson was voted anonymously by GMs to be the player most likely to break out - following his $105 million extension on Monday morning, this year would be a great year for Triple J to do so. Either way, Grizzlies o41.5 wins is a great bet.

This brings us to the best futures bet on the entire board.

Combining this Memphis Grizzlies optimism with the impending failures of a Kidd-led Mavericks team, it’s pure blasphemy for the Mavs to be -275 favorites to win the Southwest division and equally insulting for the Grizzlies to be +450 to do the same. And bringing things full-circle, coaches of those surprise teams we mentioned previously frequently win Coach of the Year. With that in mind, Taylor Jenkins to win COTY at +2,200 would be a wise wager if you’re a believer.

The Atlanta Hawks (win total of 47.5 wins) are another team with a lot of upside, and they also won’t have to go through a midseason coaching change. Atlanta is currently +4,000 to have the best record in the league, which is a fun, low-risk, high-reward stab that makes sense.

The Milwaukee Bucks (win total of 54.5 wins) return essentially their entire championship roster minus PJ Tucker while adding key depth contributors in Grayson Allen and George Hill and could also add in a potential Jordan Nwora emergence. On the other hand, it’s a quick turnaround for a team that played into July and had two of its big three players in the Olympics (Khris Middleton and Jrue Holiday). The Bucks should start very fast or very slow, and identifying that early could make for good returns.

The Chicago Bulls (win total of 43.5 wins) completely retooled their roster between the deadline acquisition of Nikola Vucevic last year and the additions of Demar Derozan, Lonzo Ball, and Alex Caruso. The problem? None of these guys are any good at defense, and their roster was already defense deficient before adding any of these guys. Keep an eye on the Bulls’ totals to start the season.

The Indiana Pacers (win total of 42.5 wins) are being outright disrespected this year. They had a 47.2 win percentage in last year’s shortened season, which is an entire 82-game season equates to nearly 39 wins. For a team that missed Malcolm Brogdon, Caris LeVert, Myles Turner, and TJ Warren for extended stretches last year, it’s hard to imagine this team not being able to put together four more equivalent wins this year. It also probably helps that there won't be a rift between the head coach and the players this year, as the Pacers replaced Nate Bjorkgren with Rick Carlisle. He boasts an impressive 54.8 percent career-winning percentage as a coach and has only missed the playoffs four times in his 19 years as a head coach. Pacers to make the playoffs at -150 or better is a no-brainer. 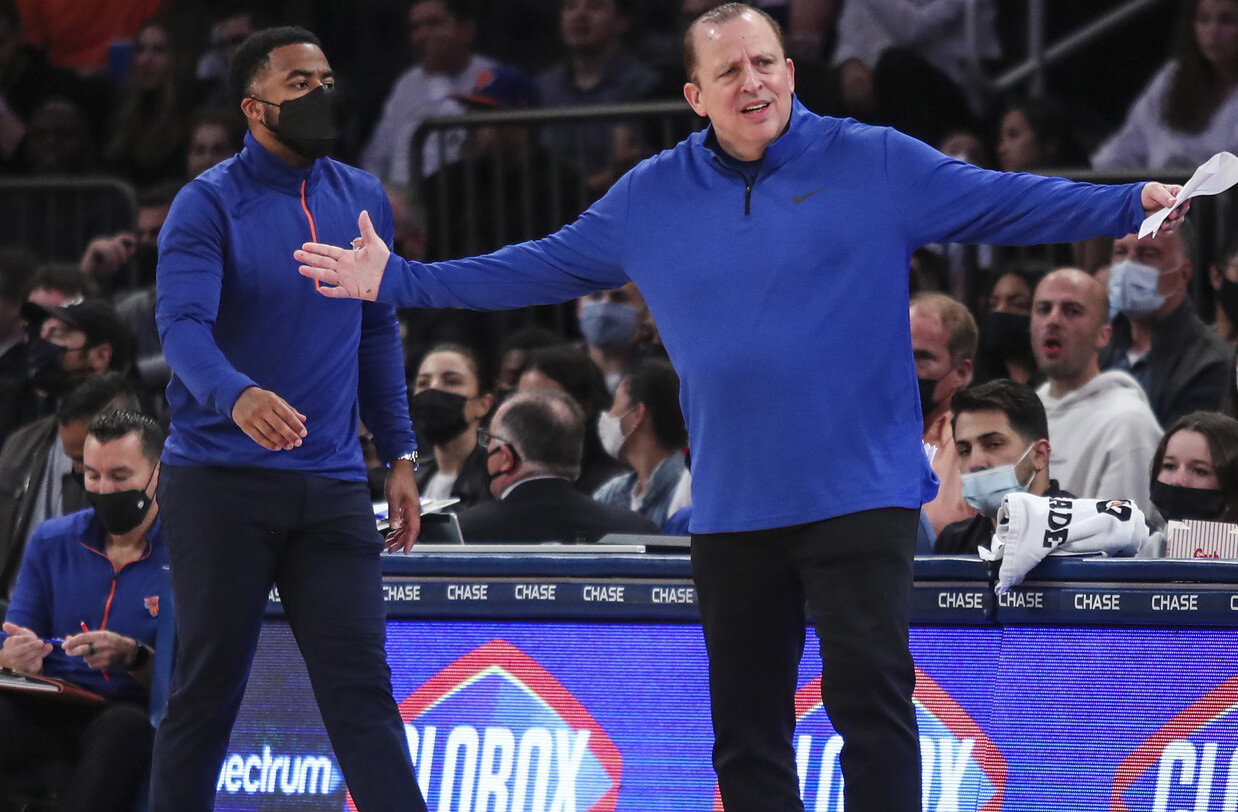