Denny Hamlin has yet to win a race on the NASCAR circuit this year, but remains the overall points leader in the Cup Series. Find out if he's a good bet to snare his first W with our Foxwoods Resort Casino 301 picks.

The heat is on as NASCAR revs its engines for the season's home stretch.

The Foxwoods Resort Casino 301 runs this weekend, after which the drivers will get a two-week vacation before the final month of pre-playoff races. This is your last chance for NASCAR betting for a little bit — make the most of it!

Get the inside track on your NASCAR bets with Covers Experts' Auto Racing Advisor preview and picks for the Foxwoods Resort Casino 301, which gets underway at 3:00 p.m. ET on Sunday, July 18.

You can’t overlook him here. He has nine straight Top-15 finishes, including a runner-up the last two years and a win in 2017. On short tracks this season, he was third (Phoenix), third (Martinsville), second (Richmond) and seventh (Dover).

Busch has 10 Top-10 finishes in his last 13 New Hampshire starts, including seven in the Top 3. He also has two wins and four runner-ups in that time frame.

Truex had five Top-10 finishes in his first seven New Hampshire starts. Then, he had two in his next 13 tries there. But seven of his last eight have seen him finish in the Top 10 again, including five straight in the Top 7. He was third last year. Also, Truex won Phoenix and Martinsville, and was fifth in Richmond.

He’s won this race in two of the last three years and was fifth in the other. Harvick also has eight Top-5 finishes in his last 10 starts in the Granite State, including three wins in his last six starts there overall.

The records show Keselowski as the defending race winner on this track, but recent history shows Busch with a strong chance of winning this matchup.

Busch starts on the pole Sunday and the last time he did so, he won in Loudon. In fact, he's the only driver to win from the pole in the last 16 New Hampshire races. Also, Busch has seven Top-3 finishes – four of which being runner-ups – in his last 13 New Hampshire starts. On the season, Busch has four straight Top-2 finishes.

Keselowski, meanwhile, has just two Top 5s in his last 11 and is now dealing with an awkward scenario where it’s been announced that he won't be back with the team next year.

Hendrick hasn't won at Loudon since 2012 and Elliott has just one Top-5 finish in seven starts on the Magic Mile. I'd fade his HMS teammate, William Byron, too. Byron enters on a cold streak and has yet to score a Top-10 finish in three New Hampshire starts.

The NASCAR Cup Series drivers have one more race before the final off weekends of the season. See, they’ll get two weeks off while NBC Sports focuses their attention on the Olympics with the NASCAR drivers getting a much-needed break before the final push to the championship.

Loudon is a track that is a great precursor for Phoenix in the sense that they race somewhat similar and that the drivers who typically do good in New Hampshire typically are the ones in the Championship 4 come the Fall.

Since New Hampshire became a once-a-year track in 2018, championship 4 drivers have finished 1-2 in all three years. They took three of the Top 4 spots in two of the three years at that. In saying that, we’ve seen Hendrick Motorsports and Joe Gibbs Racing really separate themselves from everyone else in 2021.

SHR has been down this season, but this is a great track for them. Kevin Harvick has eight Top-5 finishes in his last 10 tries, including two wins and a fifth-place effort in his last three. Aric Almirola was third in 2018, 11th in 2019 and seventh last year. Cole Custer was even eighth a year ago.

For 2021 though, they’ve struggled. Harvick has no Top-5 finishes on short tracks this season. Almirola was sixth in Richmond and that’s his only Top 10 on any 750 track for this year. Custer was 10th in Dover but his other short track finishes have been 18th or worse. Chase Briscoe has been 17th or worse in all but one start on 750 tracks, and the only one better was a sixth-place run in the rain at COTA.

But it has always seemed like New Hampshire breaks them out of their funk though.

For Penske, Ryan Blaney has been quietly good at New Hampshire with three Top 10s in his last four tries. Brad Keselowski won this race last year, while Joey Logano has four straight Top 10s, including a fourth-place result in 2020. On short tracks this season, Blaney has no Top 5s, Keselowski was fourth in Phoenix but no other finish better than 14th, while Logano has a Top 6 in all.

They all said that they’re lacking in speed, and don’t know if there are enough resources available to them right now to fix it.

Hendrick Motorsports are the ones to watch, as they’ve been the opposite of SHR. They’ve been great on the season but not had much luck lately in Loudon, as they’ve not won there since 2012. Chase Elliott has one Top 5 in seven New Hampshire starts. William Byron as well as Alex Bowman have each yet to score a Top 10 in three tries there with Hendrick Motorsports. Their short track program this season though has seen Kyle Larson finish seventh (Phoenix), fifth (Martinsville), 18th (Richmond) and second in Dover. Elliott was fifth, second, 12th and third in the same races himself, with Byron (8th, 4th, 7th, 4th) and Bowman (13th, 34th, 1st and 1st) too.

Just twice in the last 10 Loudon races has the driver to lead the most laps actually won the race outright. 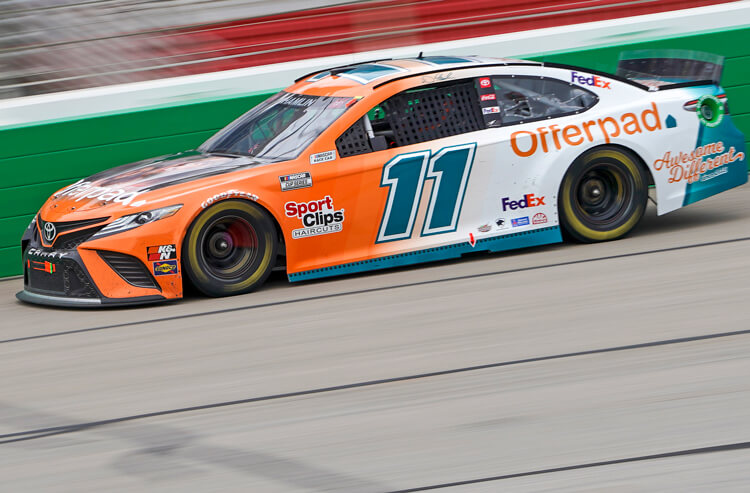