Canadians Bet On Politics, But Wagering On Their Own Election Can Be A Sensitive Subject

Recent polling suggests Prime Minister Justin Trudeau's Liberals are ahead, but there's a month of campaigning still to come for Canada's federal election.

When Americans went to the polls in November 2020, their neighbours to the north were interested in the outcome as well.

Many Canadians were probably concerned most about the political leadership of the United States, their country’s biggest trading partner and the nearby owner of a massive arsenal of nuclear weapons.

Not everyone’s interests may have been so geopolitical, though. While the vote-counting continued, at least some Canadians were watching closely because they had money riding on the outcome.

The 2020 U.S. election was “the single-most popular betting event” in the history of PlayNow.com, a spokesperson recently told Covers. The website, which is owned and operated by the British Columbia Lottery Corp., has offered certain novelty bets since 2014, and took around $3 million in election-related wagers from the province’s bettors, BCLC’s Matt Lee said in an email.

Surely Canadians would then have some interest in wagering on the September 20 Canadian federal election triggered last weekend by Prime Minister Justin Trudeau. Recent polling suggests Trudeau's Liberals are leading, but there's a month of campaigning to go — plenty of time to lock in a bet.

However, when it comes to Canadian oddsmakers offering Canadian election betting odds, it can be a sensitive subject. Some books do take bets, but provincial lottery corporations have thus far been staying away.

For one thing, entities like BCLC are owned by provincial governments, and they may be hesitant to take bets on elections happening in their backyard. That's the case in British Columbia.

So, while BCLC is currently offering odds on the 2021 gubernatorial recall election in California, it’s not offering players the option to plunk down cash on the outcome of September’s federal election in Canada.

“As a Crown corporation in British Columbia, BCLC feels it would be inappropriate to offer betting on B.C. or Canadian politics, and as a result we will not be providing bets on the upcoming 2021 federal election,” Lee said.

BCLC isn’t alone in dabbling in some novelty markets, yet steering clear of Canadian politics.

Atlantic Lottery Corp. — owned by the provincial governments of Nova Scotia, New Brunswick, Newfoundland and Labrador, and Prince Edward Island — allowed players to wager on the birth of the Royal Baby in 2019, but won’t be offering odds on the likelihood of a Liberal majority next month.

“Atlantic Lottery does not offer wagers on any Canadian elections,” spokesperson Greg Weston said in an email.

This may suit bettors on the West and East Coast of Canada just fine; perhaps they’d rather preserve their bankroll for football season anyway.

But, election betting is popular abroad. A report last October from Agence France-Presse said there were estimates of more than $1 billion wagered on the outcome of the U.S. presidential election, even with betting on that election illegal in the U.S. itself.

And as BCLC’s numbers suggest, there is a decent amount of interest in betting on politics in Canada as well. That could even extend to the very elections in which Canadians are voting.

There also aren’t any legal obstacles to a provincial lottery corporation taking bets on an election, Canadian or otherwise.

Canada’s ban on single-game betting will end on August 27, but BCLC’s election wagers didn’t need to be parlays. The Criminal Code’s current wording is aimed at bets on “any race or fight, or on a single sport event or athletic contest,” with no restrictions on political contests (unless Canadian lawmakers start boxing each other again).

Betting on election results was not prohibited by the section of the Criminal Code that will officially be tweaked later this month, lawyer and gaming-law expert Don Bourgeois says. It won’t be after the change comes into force either.

“The issue then turns to ‘who’ may conduct and manage a lottery scheme that involves betting on the results of an election campaign and only the Crown corporations (such as BCLC, OLG, Loto-Quebec and so forth) may do so,” said Bourgeois, legal counsel at Fogler, Rubinoff LLP, in an email. “They will normally not offer that type of bet for public policy reasons.”

One sportsbook that is taking wagers on the Canadian election at the moment is Sports Interaction. Among other possible bets available as of Tuesday afternoon, Sports Interaction's odds on the Liberals claiming a majority of seats in the House of Commons on September 20 stood at -115 (as in you would have to bet $115 to win $100).

According to the Mohawk, their current situation isn’t necessarily from a lack of trying on their part.

“In most provinces in Canada, agreements between provincial governments and Indigenous governments regarding varying degrees of Indigenous participation in gaming have been put in place post-1985,” the MCK said in a submission to the House of Commons’ justice committee in March. “That is not the case in Québec, which has consistently refused to engage in meaningful conversations about gaming with the Mohawks of Kahnawake, and which does not share any part of its significant gaming revenues with the Indigenous peoples within its borders.”

The Mohawk supported an amendment to C-218, the legislation that will legalize single-game sports betting this month, that they hoped would address this issue. The proposed tweak to the bill would have amended the Criminal Code to specifically allow for an Indigenous council or government to run a “lottery scheme,” which could include sports betting, under an agreement with the federal government.

But the change to the legislation wasn’t made, and the bill was then passed, became law, and will come into force on August 27. On that day, provinces will be able to legally offer single-game wagering, a situation which had the Mohawk concerned they would be put at a disadvantage.

Justice Minister David Lametti suggested recently the issue could be addressed in the future, but there’s no guarantee Lametti will still be justice minister after next month’s vote.

In the meantime, Sports Interaction is seeing significant interest in betting on the September 20 election. According to Phill Gray, Sports Interaction’s head of trading operations, the sportsbook has posted 29 separate events to wager on thus far, with more likely to come.

“We are seeing a large spike in interest for this election somewhat attributable to the increased awareness of gaming in Canada,” Gray said in an email. “It certainly won’t match the interest in a U.S. general election, but it will be quite healthy in terms of take. I would expect our handle to far surpass anything we’ve ever offered in Canadian politics.”

There are still some provinces that might be willing to dabble in the same sort of betting markets at some point in the future, such as Alberta.

Alberta Gaming, Liquor and Cannabis is currently working on sports betting, and it remains undecided about offering bets on next month's federal election on its website, PlayAlberta.ca.

“In order to ensure the needs of Albertans are met, AGLC will continue to evaluate and adjust established games on Play Alberta while adding new markets and types of bets for players,” the Crown agency said in an email. “At this time, AGLC cannot commit to Play Alberta having a market on September’s federal election.”

Bettors in Ontario may have to wait a bit for their provincial lottery corporation to take election bets as well.

“We will deliver an exciting digital sports experience with betting innovations rolling out over the coming weeks and months, including novelty bets which will be phased in after launch,”  OLG spokesperson Tony Bitonti said in an email.

New PROLINE+ online betting with Single Event Betting and much more!
Get ready for the plus side of sports betting.
REGISTER EARLY

Come December, though, OLG likely won’t be the only game in town. The Ontario government is developing a competitive market for internet gaming that will include sports betting, but could also offer novelty betting.

The province’s new iGaming market would allow other sportsbooks to participate, such as Sports Interaction or Betway, the latter of which on Tuesday was offering odds of +100 for a Liberal majority in next month's federal election.

Draft rules for sports and event betting recently released by the Alcohol and Gaming Commission of Ontario set out certain criteria for wagers, including that they don’t involve animal cruelty. It doesn’t appear election betting would violate any of those rules, which will apply to OLG's internet gaming website and all registered iGaming operators in the province when the new market launches.

“In relation to your inquiry about novelty bets that involve political events and elections, the draft Standards allow for these types of bets to be offered as long as they meet the acceptable betting criteria, such as ensuring they are not ‘reasonably objectionable,’” the AGCO’s communications team told Covers.

Yet Ontario’s iGaming market isn’t expected to launch until December. By then, there could be a new prime minister, or a Liberal majority for Prime Minister Trudeau in Parliament.

If that’s the case, Canadian political punters would have some time to start handicapping the next trip to the polls. Meanwhile, their interest in betting on elections could continue growing.

“The 2020 U.S. general election was the single biggest online betting event in history, taking billions worldwide with no exaggeration,” Sports Interaction’s Gray said. “Although certainly not a typical example, the precedent is there for political betting to only gain more popularity.” 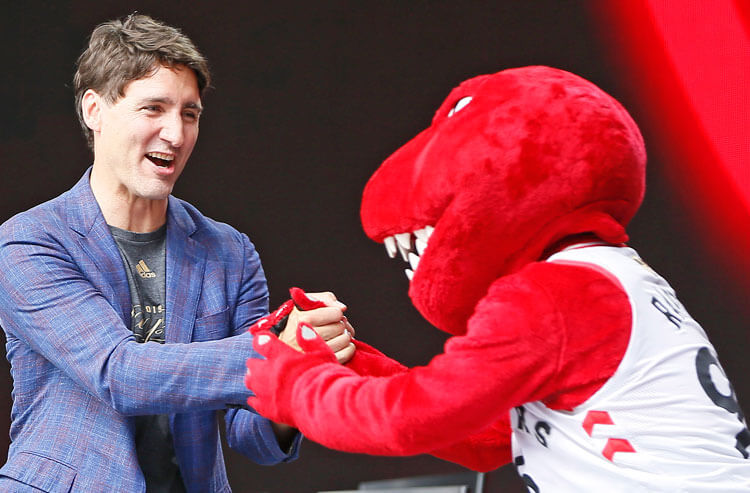 Canadians Bet On Politics, But Wagering On Their Own Election Can Be A Sensitive Subject
Provided by