"Depending how the earlier games fall on Sunday, I mean, there just could be a monstrous amount of liability build up on this."

There are high hopes for Mac Jones, heaped on him by virtue of being a first-round draft pick, in a sports-crazed market, and being the now-starting quarterback for a franchise still relatively fresh off enormous success with living legends, including one of Mac’s predecessors.

Many bookmakers, however, would be happy with just one thing from Mac and the New England Patriots: Which is that this weekend they keep their game with the Tampa Bay Buccaneers close enough to cover the point spread.

That’s because the amount of money and bets riding on the Buccaneers-Patriots matchup for the National Football League’s Sunday night game is overwhelmingly tilted towards Tampa Bay and its quarterback, former New England great Tom Brady.

As of Thursday afternoon, for instance, PointsBet Sportsbook said 94 percent of bets and 96 percent of handle was on Tampa Bay to cover the point spread.

There is also a ton — seriously, it’s going to be a lot — that is set to be bet on this week’s Sunday nighter, with, again, the bulk of it likely backing the Bucs. Plenty of action for retail and online sportsbooks won’t even be placed until much closer to kickoff as well.

Still, at FanDuel Sportsbook, 95 percent of both bets and money were on the Bucs to win by more than seven points as of Friday morning, for what the operator expects will be its biggest game of the season. At WynnBET, the split was 97 percent of bets and 95.2 percent of the handle on the Bucs to cover the spread.

“It’s hard to have an expectation that this game could have our highest handle in the regular season without knowing what else might come in the following weeks,” WynnBET trader Sawyer Johnson said in an emailed statement. “That being said, there is a real possibility that it could be given where our handle is now.”

In short: it’s looking like the Sunday nighter could be absolutely massive for sportsbooks. And, depending on how the game plays out, it will be either a massive win or a massive loss.

Tom Gable, director of race and sports at the Borgata Hotel Casino and Spa in Atlantic City, said they opened the line at six points for the game, before moving to six-and-a-half, and now seven points.

“It’s just been a steady stream of Tampa money,” Gable said in an interview. “It’s actually the most heavily bet game so far on the Sunday slate here. Tampa’s also, by far, included in the most teasers and parlays as well.”

After talking to a number of North American and European operators, Phill Gray, the head of trading operations at Sports Interaction, said he expects it will be the single biggest NFL regular-season game yet for sportsbooks in terms of handle.

“I've never seen this little interest on a home dog of seven points,” Gray said in an interview. "It's setting up to be a monumental loss if Tampa Bay wins and covers.”

There is cause for so much interest in the NFL’s Week 4 Sunday nighter, as Brady is returning to his former home for his first game there since leaving and winning a Super Bowl with the Bucs. Standing across the field from him will be his former coach and longtime collaborator, Bill Belichick, as well as Jones, who many in the New England region hope will lead the Pats back to the promised land.

The game being Sunday’s last, in prime time, also means numerous parlays and teasers could hinge on its outcome, or that bettors may use it to try to recoup losses from earlier in the day, the Borgata’s Gable said.

While the handle may not grow to the same size as that of a playoff game for the New Jersey casino, it's still going to be pretty big.

"Depending how the earlier games fall on Sunday, I mean, there just could be a monstrous amount of liability build up on this," Gable said.

Other factors are pumping up the betting interest as well, including the expansion of legal sports betting across North America and oodles of cash operators are spending to attract new customers.

Research conducted for the American Gaming Association found an estimated 45.2 million Americans plan to wager on the NFL’s 2021 regular season, which would be a record. In addition, sportsbooks are spending many millions of dollars on advertising and promotions, such as Caesars Entertainment Inc.’s plan to drop more than $1 billion over the next two years on online gaming.

So, while Sports Interaction is used to seeing maybe twice as much money on the Sunday nighter as some of the other NFL games, this week it is looking like it will be much, much more.

“I'm taking five to six times as much in advance money on Tampa Bay than any other game,” Gray said.

Somehow even more to come

What may be even crazier, though, is that much of the betting on the game won’t happen until closer to kickoff. Gray said about 75 percent of money bet on an NFL game for them usually comes in the last three hours before it begins.

Meanwhile, as of Friday afternoon, many books were still holding the Bucs-Pats line at seven points. Even there, Gable said they aren't seeing much action come in on New England.

"It's still early," he added. "So, I certainly do expect to get some Patriots money here, but throughout the week it just hasn't materialized."

The line could keep being adjusted at books as the money keeps flooding in. Sports Interaction's Gray said he can’t see books accepting the rising level of liability.

“Myself, sitting on seven right now, it's gonna have to go to seven-and-a-half or eight on Sunday,” he said. “I will be first to pull the trigger on Sunday if I have to.” 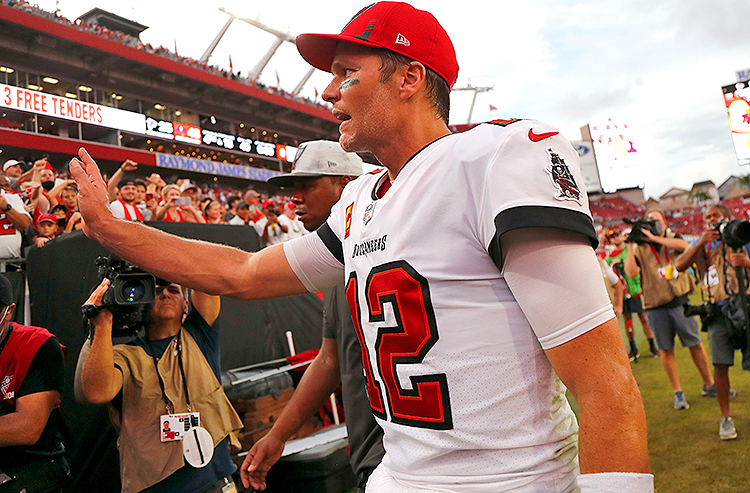 Is Ontario About to get Hit by a Wave of Advertising for Online Sportsbooks?
Geoff Zochodne | Nov 29, 2021
About Us
Contact Us
Careers
Our Team
Brand
Testimonials