Horse racing takes center stage on Friday, November 4 when the Breeders' Cup Juvenile returns to Keeneland. Find out which two-year-old male is expected to come out on top.

The next stop on the 2023 Road to the Kentucky Derby horse racing series begins today with the $2 million Breeders’ Cup Juvenile (G1) at Keeneland on Friday, November 4. Not only does the Juvenile usually decide championship honors among the nation’s two-year-old males, but also tends to determine the wintertime favorite for the following spring’s Kentucky Derby (G1).

There have already been four point-scoring opportunities in the series run this fall, and the winners of all of them were pre-entered for the 1 1/16-mile Juvenile. However, the recent history of those races suggest some are stronger barometers than others when it comes to the Juvenile and Derby. Let's dig into the numbers and provide the best bet for today's action. Make sure to also check out our other value plays and longshot picks for Breeders' Cup Friday.

Bettors should look beyond Iroquois and Champagne results

The first Derby prep was the September 17 Iroquois (G3) at Churchill Downs, a much younger race than the other three and one that has never been won by an eventual Juvenile or Derby winner. Although Iroquois winner Curly Jack is by Good Magic, who won the 2017 Juvenile and finished second in the 2018 Derby, the race itself was not a strong one on paper.

Curly Jack launched a wide move on the far turn and charged to a clear lead by midstretch, recording a 10-1 upset in Saturday’s Iroquois (G3) @ChurchillDowns, the first race in the 2023 Road to the @KentuckyDerby series.@James_Scully111 recaps ?? https://t.co/m8kSnB1mhw pic.twitter.com/GsedjlIwFL

The October 1 Champagne (G1) at Aqueduct, a race that dates back to 1867, has a tremendous history at producing Juvenile and Derby winners, though it’s been a decade since a Champagne winner has won the Juvenile and 30 years since Sea Hero pulled off the Champagne/Derby double. Champagne winner Blazing Sevens has only run around one turn so far, but he is also by Good Magic, and trainer Chad Brown is a firm believer the colt will excel with additional distance.

The track-and-distance prep for the Juvenile was the October 8 Breeders’ Futurity (G1). Although none of its winners have won the roses at Churchill Downs since Swale in 1984, it’s become an increasingly strong Breeders’ Cup Juvenile prep. Recent horses to have won both include Essential Quality (2020) and Classic Empire (2016).

Due to the fact it was an opportunity for prospective Juvenile runners to get a race in over the track, the Breeders’ Futurity attracted a full gate of 14 horses. However, two proved head and shoulders above the rest as Forte and Loggins turned in a tremendous stretch duel and were separated by only a neck at the finish, with the next closest pursuer nearly seven lengths behind. Forte is back for the Breeders’ Cup, but Loggins is taking a pass on the race.

Cave Rock is the overwhelming favorite

The American Pharoah produced the likely overwhelming Juvenile favorite in Cave Rock who, like Corniche and Game Winner, is trained by Bob Baffert. As readers may know, Baffert is currently suspending from entering and starting any horses at Churchill Downs, including in the Kentucky Derby. Because of that suspension, any horse he trains is unable to accrue qualifying points in the Road to the Kentucky Derby series. However, the suspension does not preclude Baffert from racing at Keeneland nor in the Breeders’ Cup, as seen by Corniche’s win last year.

#5 Cave Rock (2/5) can't be caught in the American Pharoah (G1), remaining unbeaten with @JJHernandezS19 aboard.

A son of the Baffert-trained Arrogate, who won the 2016 Breeders’ Cup Classic (G1), Cave Rock is the undisputed division leader at the moment with three wins in as many starts and by an average margin of 5 1/2 lengths. The colt’s modus operandi is to let ‘er rip from the opening of the stalls and bury the competition with his brilliant speed. So far, it’s worked.

Whether Cave Rock can continue to succeed doing that through the Derby (for another trainer) is immaterial with regards to the Juvenile. On paper, he looks a slight cut above the Breeders’ Cup competition. However, bettors should also take a look at the Baffert-trained National Treasure, whose distant second-place finish in the American Pharoah stacks up well compared with the other prep winners.

Be sure Opt-In to the TwinSpires Breeders’ Cup Bet Back offer before placing the win bet! 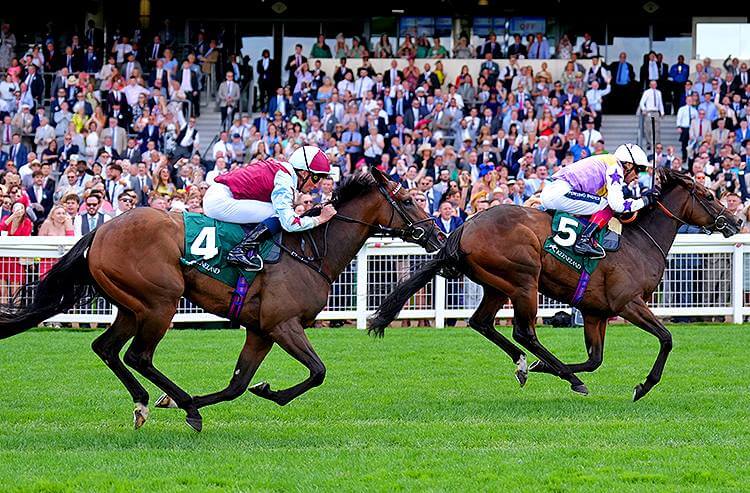