Horse racing returns to Keeneland on November 4 with Day 1 of the 2022 Breeders' Cup. Get the best bets for the Juvenile Turf Sprint, Juvenile Fillies Turf, and Juvenile Turf.

Friday is the day to watch possible contenders for the Kentucky Derby next May, mostly likely in the Juvenile. However, you may also see a horse that becomes a Breeders' Cup Classic winner in another country, as last year’s Juvenile Turf winner Modern Games would go on to become in France this year.

With five great races today it’s no surprise this is one of the biggest betting days in North America; last year a record $61.3 million was invested. There are many great betting opportunities, and here are some suggestions that could make it a profitable as well as exciting day.

No American trainer is better at preparing fast two-year-olds than Wesley Ward, who has won this race the last three years. His candidate this year is Love Reigns, who showed blazing early speed when winning the Bolton Landing Stakes at Saratoga August 21, and she gets all favors to show this same speed from gate two. Her main rivals, #13 Speed Boat Beach and European visitor #14 The Platinum Queen, are badly hampered by their post positions and may still find Love Reigns too tough.

G Laurie was unlucky in the Natalma Stakes in Canada and was finishing best of all. An outside draw may help her get a clearer path and she has the benefit of champion English jockey William Buick's services.

#7 G Laurie gets a strong move on the final turn from @jorgeruizjockey to break her maiden on first asking for @GrahamMotion in Race 4 @ColonialRosies!

Irish trainer Aidan O’Brien has a great record in this race and Victoria Road has been one of his big improvers this season, winning his last three after defeats at his first four starts. He was made to look better when a horse he beat two starts back, Blue Rose Cen, easily won a prestigious race in France.

Tyler's Tribe has taken all before him on dirt in Indiana, being untested in five starts. This is a massive step up in class and the draw doesn’t help, but he could be well worth playing, especially if he stays close to his morning line odds of 15-1.

Curly Jack took advantage of a fast pace to score a rallying victory in the Iroquois Stakes September 17. If there is a strong pace on Friday Curly Jack may be a good win, place, and show chance at decent odds.

Much here depends on how much you like #3 Cave Rock, the 4-5 favorite for the Juvenile. If you take him as a single, you can spread your options more widely in the other two legs. If you think he’s vulnerable and you want something else in the Juvenile, you’ll get a better payout if he’s defeated. Both options are worth a look.

#5 Cave Rock (2/5) can't be caught in the American Pharoah (G1), remaining unbeaten with @JJHernandezS19 aboard.

If using Cave Rock as a single, then have a look at six horses in this: Frizette Stakes first two, #10 Chocolate Gelato and #2 You’re My Girl, Alcibiades Stakes principals #5 Wonder Wheel, #7 Chop Chop, and #14 Raging Sea, along with Chandelier winner #3 And Tell Me Nolies. If you want more than Cave Rock in the Juvenile, drop And Tell Me Nolies, You’re My Girl, and Raging Sea.

European fillies have a terrible record in the Juvenile Fillies Turf, having only won twice and not since 2013. Personally I’d leave out the Irish-trained favorite #10 Meditate, who hasn’t raced past six furlongs and who is coming off two defeats. The Europeans I prefer are #12 Midnight Mile and #14 Basil Martini. I would include the first two in the Miss Grillo Stakes, #5 Pleasant Passage and #4 Free Look, while Jessamine Stakes winner #9 Delight is another must. The Natalma Stakes in Canada is another key prep for this; winner #3 Last Call can’t be ignored, though the run of the race was from unlucky third-place finisher #11 G Laurie. If you’re not using Cave Rock as a single in Race 9, I would exclude the two Europeans and Last Call.

As stated above, Cave Rock has been so impressive to date that you can’t leave him out, and you may want to use him as a single. However, he’s not the only prospect. His biggest danger is clearly #4 Forte, winner of both the Hopeful Stakes and the Breeders’ Futurity. I’d personally use both.

Need to open a free TwinSpires account? Be sure to opt-in to their welcome offer for Breeders’ Cup! 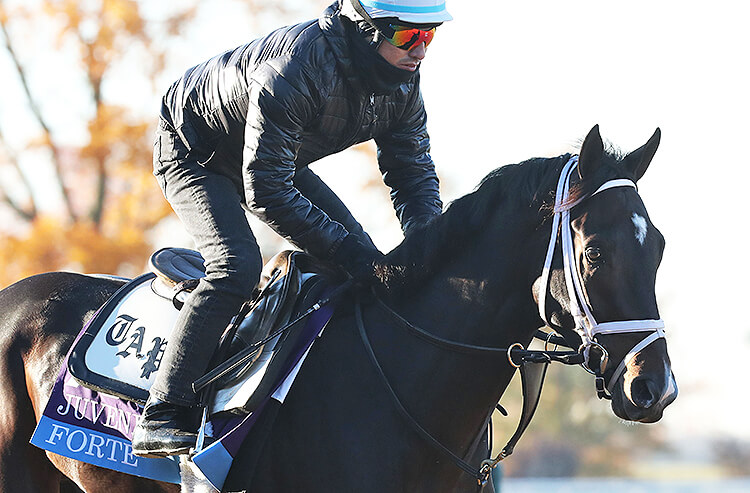