Dustin Johnson fired a 5-under 65 to take a one-shot lead with a 9-under 201 total through three rounds of the PGA Championship. The SuperBook pegged Johnson the +225 favorite to win Sunday.

Golf betting continues in the PGA Championship, with a tightly packed leaderboard heading into Sunday's final round. Updated odds feature a familiar name at the top, followed by the winner of the last two PGA Championship titles.

PGA Championship Round 4 odds and betting

Dustin Johnson got hot on the back nine Saturday and shot 5-under 65 for a 9-under 201 total and a one-shot lead over Scottie Scheffler and Cameron Champ. That led The SuperBook at Westgate to make Johnson a +225 favorite to finish this off Sunday.

"Dustin Johnson is our least profitable outcome," Osterman said. "Morikawa also would not be ideal. We still do well on him, but we would really like to see Champ +1,400, Paul Casey +1,600 or Tommy Fleetwood +2,000. We do very well on those guys."

After The SuperBook posted updated odds Saturday night, Osterman said Champ and Scheffler saw some money, as did Fleetwood.

Haotong Li, who led after the second round, would also represent a good outcome for The SuperBook, but he's now four shots back and tied for 13th after a 3-over 73. His odds are now +8,000. Tiger Woods is at 2-over 212 and has no shot, which is good for the oddsmakers.

"We are very happy that Tiger is not in contention," Osterman said. "Betting was slow on him early in the week, but picked up closer to tee-off."

On PGA Championship props, the Over/Under on total winning score was 269.5 and got good two-way play at The SuperBook. That prop will come down to the wire today.

Osterman and the risk room also have their eyes on a couple of matchups: Jason Day against Daniel Berger, which closed Berger -115/Day -105; and Viktor Hovland against Abraham Ancer, which closed Ancer -120/Hovland even money.

"Berger and Day are tied, and Ancer has a one-shot lead on Hovland," Osterman said. "We need Hovland and Day."

PGA Championship Round 3 odds and betting

Brooks Koepka, going for his third straight PGA Championship victory, remained the favorite after shooting 2-under 68 Friday for a 6-under 134 total. Koepka is in a six-way tie for second, two shots off the lead of Haotong Li.

CG Technology sportsbooks in Las Vegas have Koepka at +250. Jason Day is the +750 second choice, followed by Daniel Berger and Tommy Fleetwood at +800 and Justin Rose at +900, and all four are also tied with Koepka.

Li, who fired a 65 Friday and is at 8-under 132, was such a surprise that he remains part of the Field bet at CG Technology, which is now +600. Meanwhile, Tiger Woods is tied for 43rd at even-par 140, one stroke above the cutline.

PGA Championship Round 2 odds and betting

Jason Day and Brendon Todd shared the lead after the first round, as both fired 5-under 65 Thursday. However, neither player is favored in Thursday night's updated odds at Circa Sports. Rather, Brooks Koepka, one shot back at 66 in a massive tie for third, is the +413 favorite.

Anyone who got on Todd pre-tournament certainly wants to see more play like Day 1. Todd opened +8,600 at Circa Sports and stretched to +12,000 by the time play opened Thursday. But other players are more concerning to Benson.

"Todd wasn't popular in outrights, in terms of ticket count," Benson said. "Day saw some big play at +4,500. Schauffele and Koepka were popular plays on the futures board."

Benson said Woods, who could be had at +4,200 pre-tourney and is now +3,000, didn't see a lot of action in the to-win market. In fact, some bettors lined up against him in PGA Championship prop bets.

"We took a lot of anti-Tiger bets in matchups," Benson said.

Are people betting on Tiger Woods in the PGA Championship?

UPDATE 1 A.M. ET THURSDAY: Nine hours before the first golfers tee off, Tiger Woods is creating liability at William Hill US sportsbooks. Director of trading Nick Bogdanovich said Woods is taking the most tickets and is among the book's worst-case scenarios, should he make a run ths weekend. Woods is +2,800 heading into the first round.

UPDATE 7 P.M. ET WEDNESDAY: Woods is No. 1 in ticket count at FanDuel Sportsbook, but only No. 5 in money bet.

UPDATE 4 P.M. ET WEDNESDAY: DraftKings Sportsbook is seeing interest in Woods, who at +3,300 is drawing the second-most tickets and in dollars bet is tied for second with Xander Schauffele (+1,800).
---

Based on Woods’ drop-off in PGA Championship odds, it would appear the answer is no at The Superbook.

“So far, we haven't taken much of anything on Tiger. Our odds on him were as low as +1,600, and we’re up to +3,500,” Osterman said, noting PGA Championship odds have been up since March 15. “This is very different from what we normally see with Tiger in majors. His lack of tournament rounds leading up to this week has to be playing a factor in the lack of play on him.”

Who are people betting to win the PGA Championship?

UPDATE 4 P.M. ET WEDNESDAY: Koepka, coming off his tie for second at last week's WGC-FedEx St. Jude Invitational, is drawing the most tickets and most money at DraftKings. Koepka is the +1,100 second choice, behind +900 favorite Justin Thomas, who won last week. Early bettors are also on Rory McIlroy and Bryson DeChambeau, the co-third choices at +1,500 along with Jon Rahm.

Justin Thomas and Brooks Koepka are the +1,000 co-favorites at The SuperBook, coming off their final-day battle in last week’s WGC-FedEx St. Jude Invitational. Thomas won that battle and the tournament, with Brooks tying for second. But one notch below them is where more of the early money is in the PGA Championship.

Where are the sharp bets on the PGA Championship?

Matthew Fitzpatrick is also landing sharp money in moving from +10,000 to +5,000 at The SuperBook.

Which prop bets are people betting in the PGA Championship?

UPDATE 7 P..M. ET WEDNESDAY: An interesting nugget from FanDuel Sportsbook: Woods is the most popular golfer in the To Miss The Cut prop, by a considerable margin. Sixty-nine percent of bettors in this market – which lists 34 players – are taking Woods +164 to not get beyond Friday's second round.

The total winning score is a popular weekly prop on the PGA Tour, even more so in a major tournament. The SuperBook pegged the Over/Under at 269.5, on a course where par for the weekend is 280.

Osterman also noted good action on whether there will be a playoff, with the public playing Yes, drawing that line in from +330 to +300.

Who will win the PGA Championship?

Where can I bet golf odds?

Many online books and casinos offer bets on golf odds and props. Check out the best sportsbooks available where you live. 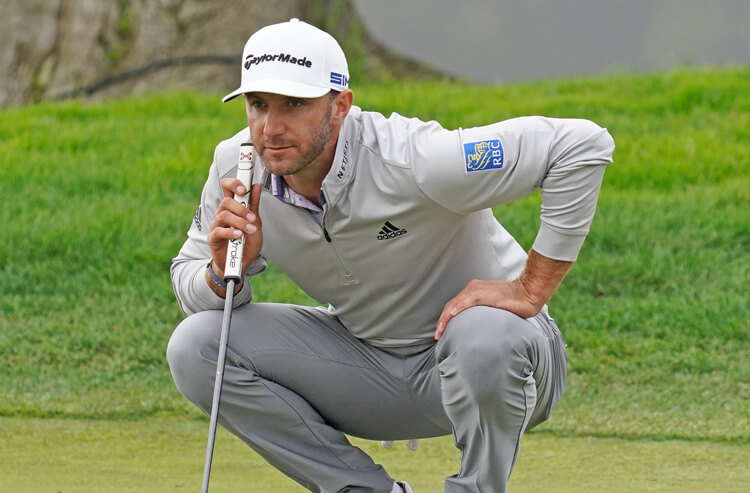