Justin Bieber vs. Tom Cruise is happening, according to betting odds at one sportsbook

Tom Cruise is around a -200 favorite versus Justin Bieber, who comes back as a +150 underdog, should these celebrities mix it up in a proposed MMA fight.

When pop singer Justin Bieber called out famed actor Tom Cruise on Twitter earlier this month, oddsmakers around the globe instantly felt their gears grind, calculating odds for this interesting – yet improbable – bout.

Bieber, who at 25 years old is 31 years younger than Cruise at 56, tweeted, “I wanna challenge Tom Cruise to a fight in the octagon. Tom if you don’t take this your scared and will never live it down.”

For Bieber’s sake, let’s hope his MMA skills are better than his grammar.

Legal North American sportsbooks have yet to open wagering on this fictitious fight, with PointsBet USA posting “just for fun” odds on social media, touting Cruise as a -200 favorite over Bieber, a +150 underdog. However, PointsBet’s Australian home-base book is currently taking action at those prices Down Under.

IF YOU'RE LOOKING TO BET BIEBER VS. CRUISE, FIND THE BEST SPORTSBOOKS FOR MMA AND BOXING ODDS HERE!

Bieber back peddled from his original challenge by saying Cruise would likely “whoop my ass” on June 13, but apparently flip-flopped when UFC bosses Ari Emanuel and Dana White made a move to book the big-name bout. According to TMZ, the UFC reached out to Bieber’s camp and his manager said Bieber would absolutely take the fight if Cruise agreed.

Across the pond in the United Kingdom, Ladbrokes sportsbooks are offering not only odds on the fight itself – Cruise -250/Bieber +200 – but also odds on if the bout will actually take place this year, with the single-option prop set at -200 for Cruise vs. Bieber to happen before January 1, 2020.

"It's probably mission impossible for Bieber were he to step into the Octagon with Tom Cruise, no matter how ‘Confident’ he might be,” Ladbrokes spokesman Alex Apati said of the current fight prices.

In terms of a tale of the tape, the 31-year gap in age shouldn’t be too much of a decider given Cruise’s incredible physique and steel nerves.

Remember, this guy’s claim to fame (besides “SHOW ME THE MONEY!” and sliding around in his socks to Bob Seger) is doing insane stunts, such as hanging on to an airplane as it takes off and using the world’s tallest building as a jungle-gym. A guy that sings songs titled, “Beauty and the Beat” and “One Less Loney Girl” isn’t going to strike fear into his heart (or whatever Scientologists call it…).

Bieber has a slight edge in height, standing one inch taller than Cruise at 5-foot-8. However, Cruise will have the advantage in weight class, estimated to be around 169 pounds, while Bieber tips the scales at a stringy 145 pounds.

If we want to measure fortunes, Bieber is worth an estimated $265 million and has sold about 140 million records during his singing career. Cruise, on the other hand, is worth an estimated $570 million and his films have earned almost $4 billion dollars lifetime gross, according to BoxOfficeMojo. It's safe to say that should he step up to Bieber's challenge, Tom has much more to lose than just a fight.

SO, WHO YOU GOT? DEBATE WHO WOULD WIN - CRUISE OR BIEBER - IN OUR MMA DISCUSSION FORUMS! 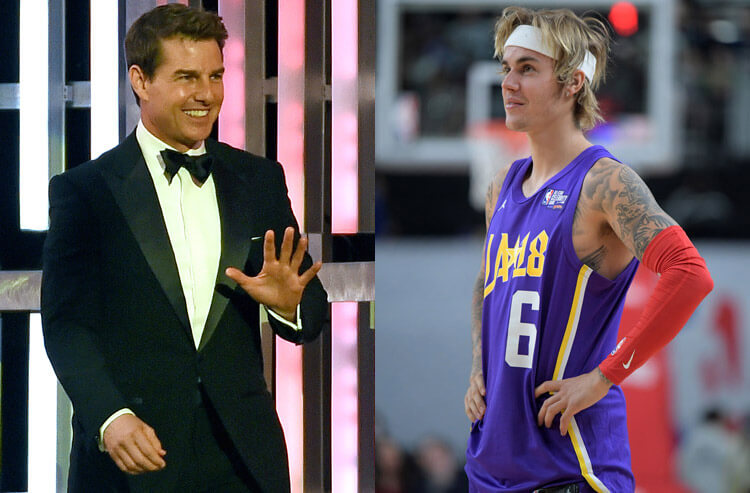 Justin Bieber vs. Tom Cruise is happening, according to betting odds at one sportsbook
Provided by

Oscars 2022 Odds, Picks and Betting Update: Can The Power of the Dog Breakthrough for Netflix?
Rohit Ponnaiya | Jan 11, 2022