Anthony Joshua lost his belts to Oleksandr Usyk last fall, and while the result seemed like an upset at the time, we don't think the former champ is in for any easier of a ride in the rematch. See why our boxing betting picks like another Usyk win.

Oleksandr Usyk vs. Anthony Joshua is scheduled for 12 rounds for the IBF, WBA, and WBO heavyweight titles and is taking place in the Jeddah Dome in Saudi Arabia today, August 20. Last year, Usyk turned in a breathtaking performance to wrest the titles from the favored Joshua, and the last man standing from this rematch will be recognized as the best heavyweight in the world.

No longer an underdog, Usyk comes in at -195 to repeat against the bigger, stronger and younger Joshua. The ex-champ might have his work cut out for him, as books have instilled him as a minor underdog at +150.

Check out our Usyk vs. Joshua picks and predictions for the best boxing betting angles.

Picks made on August 17. Click on each pick to jump to the full analysis.

B) Either fighter to be knocked down in Usyk vs. Joshua BOOSTED to +100 at Betway! Claim Now

Neither fighter has been active since their first fight last September, but much has changed ahead of the rematch. Usyk has been entrenched in the Ukraine/Russia war, though received permission to leave and defend his titles. Joshua made a long overdue trainer change in Robert Garcia, who is best known for his work with brothers Mikey and Nonito Donaire.

In their first fight, Usyk outlanded Joshua in total punches 148-123 and landed the harder shots, including a vicious 12th-round assault that saw him land 29 punches. Joshua was tentative, not nearly committed enough to impose his physical advantages and athleticism on his methodical opponent. The win made Usyk just the third former cruiserweight champion to win the heavyweight title, and put a huge damper on the notion that Joshua was blazing a path to greatness.

Both fighters have a lot to prove here. Usyk beating Joshua again would make him the de facto No. 1 heavyweight in the world in light of Tyson Fury’s repeated retirements, and would certainly end any arguments against him being a Hall of Famer. Joshua needs a win here to erase the image of a celebrity fighter going through the motions as he collects monstrous paydays in victory or defeat.

If anyone has more to lose here, it’s Joshua. The British bruiser hasn’t quite been the same since his 2017 war with Wladimir Klitschko, and his shocking losses to Andy Ruiz and Usyk have left many doubting what was once a sure thing about his career trajectory.

Usyk dominated Joshua from bell to bell thanks to his quick speed and fearlessness. Keeping Joshua off balance while firing off at odd angles prevented Joshua from getting set and landing his big shots, and Usyk should have no reason to change his approach. Should we see any change in Joshua’s attack this time, it will be a bigger focus on fighting tall and long, something he failed to do entirely almost a year ago.

After Usyk beat Joshua, the consensus opinion was that Joshua should leave well enough alone. Joshua stubbornly charges back into this rematch thinking the previous defeat was less about his opponent and more about himself, which was the case in the first Andy Ruiz defeat, but he’s going to find out the hard way.

Recent training footage shows Usyk bulked up and incredibly sharp — not to mention he is fighting with the support of his beleaguered Ukraine, hoping to give them something to cheer about as they continue their bloody conflict with Russia. Joshua’s hiring of Garcia is going to make him even more of a one-note puncher than he was in the first fight, and Usyk’s new frame will neutralize Joshua’s size, which is the only true weapon he has against him.

If the first fight was supposed to be a staunch reminder of how important boxing fundamentals are in light of explosive athleticism, then this fight will serve another cold dose of reality to Joshua. Usyk is just all wrong for Joshua much in the same vein that Tyson Fury was to Deontay Wilder, and we’ll see a clearer Usyk win here.

Prediction: Usyk to win (-195 at DraftKings)

In the first fight, Usyk explained that he was playing the long game and a knockout was not in the cards. Considering the ease of how he won and the straight beating he put on Joshua late, Usyk might take a chance here to put Joshua down and out.

Because Usyk does not possess the lights-out KO power to do that, he’ll draw a stoppage by working Joshua over hard enough for the referee to call it a night. Our call for the fight is Usyk winning by TKO at any point at +240. 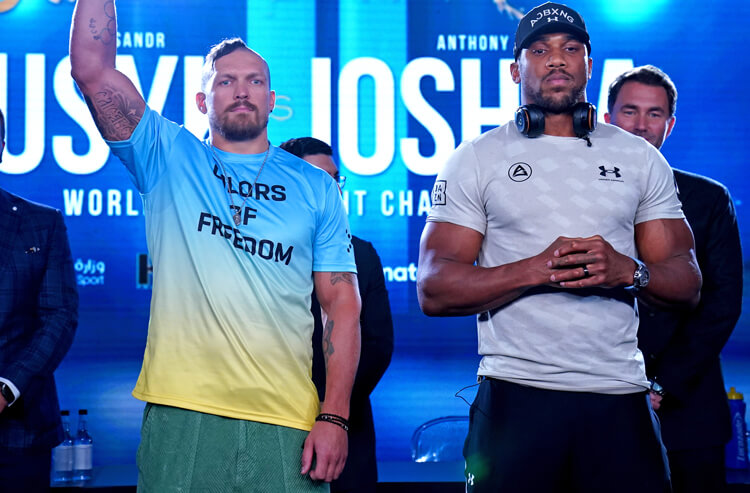