Jake Paul and Anderson Silva do battle in Phoenix on October 29, and sportsbooks are seeing significant movement on Paul vs. Silva odds for what's sure to be one of boxing's marquee 2022 events.

Just when it appeared as if Jake Paul may have bitten off more than he could chew, sports bettors once again swung the Paul vs. Silva odds.

The YouTube celeb turned professional boxing rebel has made a career out of pummeling retired athletes in exhibition fights, but his latest attempted conquest is, by far, his boldest yet.

While Anderson Silva is 47 years old, he's also one of the most lethal humans ever to step into a combat ring, holding the UFC Middleweight Championship for a record seven years. He was competing in the promotion as recently as November 2020.

This fight has seen tons of odds movement. While Paul opened as the favorite, the public piled on Silva, shifting him to -130. But recent action has favored Paul, who now has flipped the script again and sits as a -260 fave with the fight coming up tonight.

The 25-year-old Paul has been training as a boxer for four years, and has been favored in all of his hand-picked fights thus far. He knocked out fellow YouTube star AnEsonGib in the first round in his debut in 2020 before turning former NBA player Nate Robinson into a meme later that year.

Paul then knocked out former MMA fighter Ben Askren in the first round as a -177 favorite in 2021 before setting his sights on another UFC vet in Tyron Woodley.

Paul opened as a -160 fave versus Woodley, but with money coming in on the YouTube star, that line grew to -225 by the time of the fight in August. Paul was almost knocked down in the fourth round but ended up winning via split decision. He showed massive improvement in his rematch against Woodley in December, starching the former UFC lightweight champ in the sixth round.

Since then, fights against Tommy Fury and Hasim Rahman Jr. have fallen through, and while Silva isn't in his prime like the other two, he might be more technically sound. He also has a 1.5-inch reach advantage on Paul, who benefitted from length advantages against the stockier Askren and Woodley.

Silva is one of the greatest fighters in MMA history and set a UFC record with 16 consecutive wins — including 10 title defenses.  The Spider was known for his precise striking, blinding speed, and knockout power. Although he went just 1-7 in his last eight UFC fights, Silva made the move to boxing, where he has impressed.

Last summer, he faced off against 35-year-old Julio César Chávez Jr. and defeated the former WBC middleweight champ by split decision after out-landing him 99-53 in total punches and 60-41 in power punches. He followed up on that performance by knocking out former UFC light heavyweight title-holder (and fellow geriatric) Tito Ortiz in the first round last September.

Jake Paul vs Anderson Silva tale of the tape

If you're signing up for a new sportsbook for boxing betting, here are two of the best bonuses* available:

The most common way of betting on a boxing match is by picking the overall winner of the bout. With Silva being the favorite for this fight, his odds have the minus sign (-) in front of them at -140. This means that bettors would need to wager $140 in order to win $100. A Paul win would pay out more as he's the underdog at +100. This means that a $100 wager would profit $100. 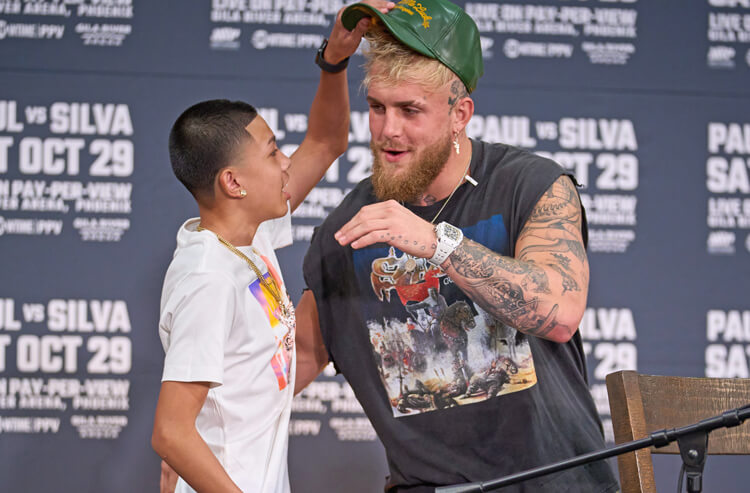