This EFL Cup quarterfinal matchup is a story of two sides heading in mostly opposite directions. As such, our Newcastle vs. Leicester City betting picks expect Eddie Howe's defense to continue dominating en route to a victory.

It’s quarterfinal time in the Carabao Cup — otherwise known as the League Cup — and Newcastle welcome Leicester to St. James Park with the hosts desperate to win silverware to please their new owners.

Can Newcastle get one step closer to lifting a trophy here? Don’t miss our Newcastle vs. Leicester picks and predictions to find out.

Last year when Newcastle got taken over — led largely by the Saudi Arabian Public Investment Fund — there was hope that the club could soon be challenging for trophies. Less than a year later and Newcastle face Leicester in the quarterfinal of the League Cup, with a trophy now just three games away.

The League Cup might not be as prestigious as the FA Cup but it’s still silverware and this year some big clubs, such as both of those from Manchester, are still involved, proving its importance. Neither Newcastle nor Leicester have won this trophy before and both sets of supporters will be desperate to see their team lift a trophy in 2023.

This isn’t a Premier League game but it’s hard not to look at the table when previewing this game. Newcastle are third in the league, just four points behind Manchester City, while also having the best defensive record in the league. Then 10 places lower in 13th sit Leicester City, just two points clear of the relegation spots and looking like a team who could be in serious trouble this season.

The most impressive thing about Newcastle’s improvement this season is that they haven’t spent fortunes of their newfound wealth. They’ve been smart with their money, not signing flashy big names or players past their best. Instead, they’ve signed a mixture of young talent and players with EPL experience. Those players combined with the coaching of Eddie Howe, surely manager of the year, have elevated this team to another level.

While Newcastle feel like a team on that exciting upward curve of a project, Leicester feel like a team at the opposite end, a team who are past its best and in desperate need of a rebuild. The Leicester team is still made up of some remnants from the title-winning team, mixed with pieces from managers who followed Claudio Ranieri.

Leicester will really miss James Maddison, with the Englishman the heartbeat of the team and their main playmaker. Without his ability to link play and create chances, it’s hard to see Leicester scoring against this talented and determined backline.

I’m very confident Newcastle will win, but with -145 being the best price available on the home win, I’d recommend backing the handicap of Newcastle -1 and backing this talented team to take the next step in their journey and reach the semifinal of a major domestic competition.

Looking to do some EFL Cup betting? Here are two of the best bonuses* available:

Newcastle vs Leicester City side analysis

Eddie Howe’s team is best in his favored 4-3-3. The backline is likely to feature Dan Burn and Sven Botman, as well as Fabian Schar, and of course Kieran Trippier. Trippier in particular has hugely improved this team with his experience and leadership, as well as his excellent delivery.

The midfield will be anchored by Bruno Guimaraes. The Brazilian isn’t yet world class but he feels like a player who might be taking that leap and he’s now firmly amongst the best midfielders in England. Up front, Newcastle’s hopes will rely on Callum Wilson, Joelinton, and Miguel Almiron. They’re talented players and should be able to take advantage of a weak Leicester defense.

Brendan Rodgers’ Leicester will come into this game in their usual 4-2-3-1. Jamie Vardy has led the line in their past two games but it wouldn’t be a surprise if Rodgers decided to go with Patson Daka here. Behind him, it’ll be Harvey Barnes and Youri Tielemens, with one other, who will be tasked with creating chances and taking the burden in the absence of Maddison.

The big question for Leicester continues to be their defense. Wout Faes has looked good since joining the club, despite his shocking two own-goal performance against Liverpool. The issue is that the rest of the backline is either injured or unfit, leaving him often playing alongside defensive midfielders playing out of position.

Newcastle are a far better team than Leicester right now. They have a better squad, they are healthier, and they’re coached by a manager at the top of his game. They should win this in front of their passionate fans.

The sportsbooks have the total juiced slightly to the Over 2.5 at -115, with the Under 2.5 countering at at -105. It's quite tough to gauge a pick if you look at the trends.

If we look at each team’s extensive Premier League records this season, there have been Under 2.5 goals in 55.6% of Newcastle’s games, a number that rises to 66.7% when they’re playing at home.

However, Leicester have been involved in a lot of high-scoring games when they’ve been on the road, with 77.8% of their games away from the King Power Stadium going Over 2.5 goals.

With such varied records I’d lean towards following my gut and my gut thinks we’ll see Over 2.5 goals on Tuesday.

It’ll be 50 degrees at kickoff after a long day with heavy rain in Newcastle. 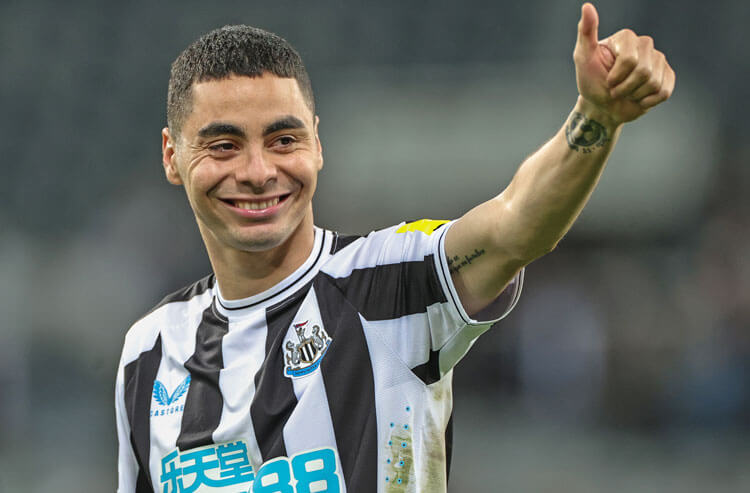