Arsenal are off to their best start in forever, while Man U look to keep rebounding from their worst in ages. With both squads weathering absences on a rainy day, our EPL betting picks favor a stalemate between these two storied clubs.

Anytime Manchester United and Arsenal face off, it’s worthy of your attention. This latest iteration has storylines galore to go with it.

The Gunners travel to Old Trafford — a stadium where they’ve won just once in their last 15 visits — as they seek to do something they’ve not achieved in 75 years. Meanwhile, the Red Devils have responded to their horrid start with a flurry of transfer activity and three straight wins, and will want to stay within touching distance of the league leaders.

It’s sure to be an entertaining clash on Sunday afternoon, and we have your best betting angles in our Manchester United vs Arsenal picks and predictions for Sunday, September 4.

It’s going to be a dreary wet day in Manchester on Sunday. Rain is expected off and on throughout the day, and there’s better than a 50% chance of it at kickoff. Winds could also play a role, with gusts likely topping at over 20 mph.

Things looked bleak for United following a humiliating 4-0 defeat to Brentford in the second week of the season. They’d conceded six goals without scoring one of their own — with just an own goal to their tally — and were void of any cohesion or tactical setup. The defeat spurred quite a few changes, both on and off the pitch, and it might have changed the ultimate outcome of their campaign.

Manager Erik ten Hag made the move to bench the captain, Harry Maguire, and partner Raphael Varane with newcomer Emiliano Martinez. He also brought in Tyrell Malacia for Luke Shaw, and the defense has shown immediate improvement with only one goal conceded over their last two. They pulled off an impressive win over Liverpool, and then added consecutive clean sheet wins over Southampton and Leicester.

United also responded by splashing nearly $200 million to bring in Casemiro from Real Madrid — who could start on Sunday — and Antony from Ajax. The Brazilians should strengthen two areas of need for the side, but it’s unlikely Antony will be in the squad, with his move just being completed on Thursday.

Arsenal are top of the league with a perfect start, taking wins in each of their first five matches. A win on Sunday would see them take maximum points from their first six matches for the first time since the late 1940s. Mikel Arteta’s men came out of the gates in terrific form, helped by having the same lineup for each of the first three matches.

However, injuries are, once again, becoming an issue for the London side. Midfield creator Martin Odegaard, who already has three goals this season, is a real doubt after hurting his ankle in their 2-1 win over Aston Villa in midweek. Left back Oleksandr Zinchenko is out, as is midfielder Thomas Partey, which takes away much of their strong midfield play from early on.

Gabriel Jesus has proven he was worth the fee Arsenal paid for him this summer, having played a role in six of their 13 goals so far. But they will hope that Bukayo Saka can step up who, despite having two assists this season, is mired in a stretch of more than 21 hours without scoring a goal. They will also need Gabriel Martinelli’s play on the opposite flank continues, as his winner against Villa gave him three on the season.

Manchester United have shown in their last three matches that they can win in different ways. Dominant for spells against Liverpool, they were fortunate to escape with a win against a Southampton side that wasted quite a few chances. Against Leicester, they scored inside 25 minutes and then simply controlled the match, being pragmatic and limiting risk.

Against Arsenal, it will take more than that to get a win. However, the injury issues for the Gunners are a real concern, and could lead to them struggling a bit to control the midfield. Cristiano Ronaldo’s absence on the pitch has spurred a resurgence this season for Bruno Fernandes, and Christian Eriksen has proven a shrewd signing as a box-to-box midfielder.

Everything about this match screams draw to me. United still aren’t quite a finished product, and the movement of Jesus and Martinelli will cause some issues for the back line. However, there are questions with United’s attack, as Marcus Rashford is still trying to reclaim his form. At the end of the day, Arsenal remain unbeaten, but their perfect run comes to an end.

In their match with Liverpool, the Red Devils did a good job of putting pressure on the primary players, and showed they’ve adapted ten Hag’s mentality of not allowing teams time on the ball. They also did a good job of preventing passes to Mohamed Salah in places where he could cause damage.

That will be important against Martinelli and Jesus, both of whom can make something out of nothing and will want to bring teammates into the attack. If Odegaard is able to go, he will be the area of focus for United, which is where Casemiro could come into play. The issue for Arsenal will be getting the ball from defense to those players, with Zinchenko and Partey both out. While Albert Sambi Lokonga played well midweek in central midfield, there’s a huge step up in class between Villa and United.

United are getting results, but they’ve still only scored four goals of their own this season — the fewest of any team in the top half of the Premier League table. They’ll likely find the scoresheet in this one, as will Arsenal, but it’s hard to see this being a goal fest. The Under is the play here, especially with how wet the conditions will be.

Arsenal’s only win at Old Trafford in the last 15 attempts was a 1-0 win in January of 2020. In their last seven trips to the northwest of England, they’ve drawn with United three times and lost the other three.

A match like this has so many subplots and tactical matchups, and both ten Hag and Arteta will want to set their sides up to get at least a point. With European football coming up this week for both sides, they will also have an eye on fitness and rotation, and will likely need to take some of their bigger names off later in the second half.

I keep coming back to the draw, which is why it’s my Best Bet for the match. I’d like to be a bit greedy and go for the 1-1 exact scoreline at better than six-to-one odds, and I’ll likely dabble on that a bit. But for the sake of simply putting myself in the best spot to make money, I’ll go with a share of the spoils at any score. 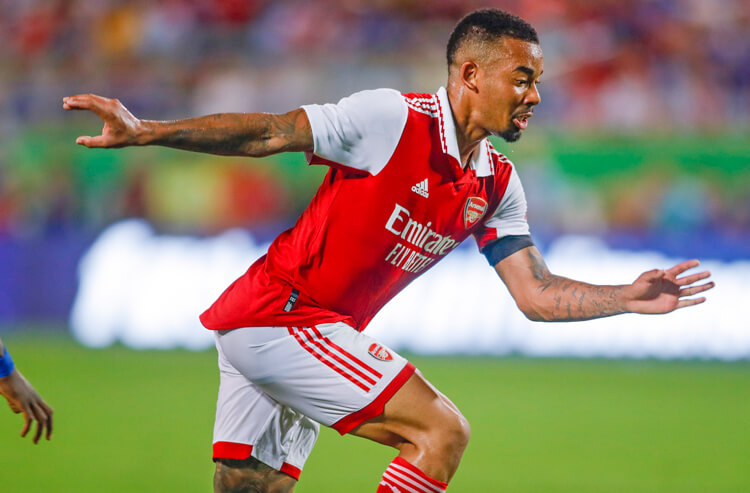