Man City vs Chelsea Picks and Predictions: City Make It Two in a Week Against the Blues

Man City beat Chelsea 1-0 at Stamford Bridge midweek in EPL play and now they clash again, at the Etihad, in the FA Cup. City have dominated this fixture in recent years and our soccer betting picks expect a repeat.

If it feels like we just saw Manchester City and Chelsea play… well, that’s because we did. Sunday will see the two teams face off in the third round of the FA Cup, just three days after they played each other in the Premier League. Man City walked away 1-0 winners away at Stamford Bridge, and now host the Blues at Etihad Stadium.

Chelsea have played in the last three FA Cup finals and tasted defeat in each one. Can the Blues begin yet another run to Wembley, or will Man City beat Chelsea for the fifth time running?

Let’s dive into our Man City vs. Chelsea picks and predictions for Sunday, January 8.

Not only have Chelsea lost four straight to Manchester City, but they’ve also been held scoreless in each of those outings. Their last goal against the Citizens came in the 2021 Champions League final.

Chelsea had opportunities in the first half on Thursday, but they also lost multiple forwards before the break. Both Raheem Sterling and Christian Pulisic limped off injured in the opening 22 minutes and joined a growing list of players who could be a mid-table team by themselves.

It’s made life difficult for Graham Potter, who now has to decide whether to rotate ahead of a trip to Fulham next week. Not only does he have to find a source of goals, but he has to try to keep enough players fit and healthy to avoid sliding further down the table.

The two teams played in the EFL Cup just before the World Cup break, and Chelsea’s scoring woes were very evident. They put five shots on goal, had an expected goals of 1.76, and failed to score as they lost 2-0. It was one of only two times in their last six matches where their xG has topped a full goal.

The one thing Chelsea have done well throughout is defending, as they’ve allowed just three goals over their last four matches. It’s kept them in matches, and it took City making multiple changes on Thursday to find a goal. Jack Grealish and Riyad Mahrez combined to score just three minutes after entering the fray.

For me, this match comes down to two things: City’s depth, and Chelsea’s away struggles. The Blues haven’t won in four straight away from the Bridge and have been outscored 8-2 in that span. Unless Potter wants to risk important players, we’re likely to see more fringe and youth players in this side, and getting a result at the Etihad will be a tough task.

Even when he rotates, Pep tends to emphasize keeping a solid backline, and combined with Chelsea’s finishing woes it sets up perfectly for a match where City can eke out a narrow win while maintaining a clean sheet.

Take City to win while keeping Chelsea off the scoresheet.

My best bet: Man City moneyline and Chelsea not to score (+120 at BetMGM)

Looking to bet on FA Cup action? Here are two of the best bonuses* available:

Man City vs Chelsea side analysis

There is absolutely no value in the Manchester City moneyline on Sunday. You’d have to lay nearly four times your return to play the host’s moneyline. If you think Chelsea can somehow steal a result, there’s value on the draw. The current lines indicate a probability of 18% for the draw and 11% for a Chelsea win, which is about right on a stalemate.

The one thing to keep in mind is the injury situation for Chelsea. They will be without N’Golo Kante, Reece James, Armando Broja, and Eduoard Mendy out, in addition to the names mentioned earlier. Plus, there’s a possibility Mason Mount may not be available again for this fixture.

Interestingly enough, there’s plenty of value on the total. Right now, the Under is providing a positive return, and if you believe in trends that’s something to keep an eye on. The two meetings this season have both gone Under, and so have each of their last five matchups.

Six of Chelsea’s last eight away matches have seen two or fewer goals scored, including each of their last three. Their last six matches regardless of location have also gone Under the 2.5 mark.

As for the Citizens, only two of their last five matches at home have gone Under 2.5 but one included the match with Chelsea. Their last two have gone Under as well, as they’ve not been scoring at the pace they were prior to the World Cup.

Chelsea have done a good job against Erling Haaland in their two meetings, as he’s yet to score in either outing. If they can continue to do so on Sunday, combined with their poor finishing, it provides a perfect recipe for another low-scoring affair.

It could be a cold, rainy evening in Manchester on Sunday. Rain is possible throughout the day, and the temperatures will feel like they’re in the low 30s starting at kickoff. Winds could be impactful, with gusts nearing 30 mph throughout. 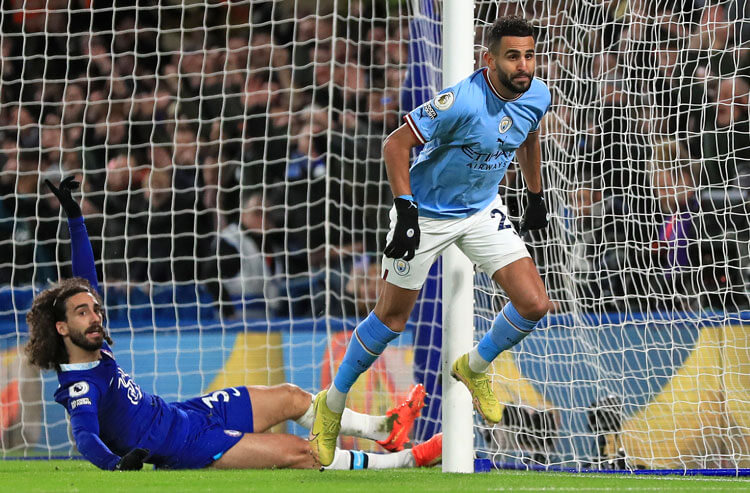 Man City vs Chelsea Picks and Predictions: City Make It Two in a Week Against the Blues
Provided by