Arsenal have rounded back into form after a poor start but head to Anfield on Saturday to meet a Liverpool team fresh off their first loss of the season. Find out if the home Reds can rebound with our Premier League betting picks.

Premier League betting returns this weekend after another international break with a fantastic slate of matches across the weekend. One of the highlights will be on Merseyside in the late Saturday slot, as Arsenal travel north to take on Liverpool.

Liverpool will be looking to rebound from their first loss of the season, in a poor performance against West Ham. Arsenal, meanwhile, are undefeated in eight straight matches and have won their previous three.

Here are our free soccer betting picks and predictions for Liverpool vs. Arsenal, with kickoff on November 20.

Showers are forecast in Liverpool throughout Saturday afternoon and through kickoff, with temperatures expected around 50 degrees Fahrenheit.

Our predictions are compiled from the analysis of the moneyline and total and are indications of where we are leaning for this game.
Our best bet is the play that we like the most for this game, which we would actually put some of our bankroll behind.

Liverpool's fantastic start to the new season, after their doomed 2020-21 campaign, hit its first bump in matchday 11. Previously undefeated, Liverpool fell 3-2 to West Ham in a match they were never really in. However, there are still numerous reasons to believe the Reds are a Premier League elite and well in title contention.

Both Mohamed Salah and Sadio Mane have played well in the new season, while Diogo Jota's role has grown in his second season with the club. The depth Jota has provided through the middle has been invaluable, especially with Roberto Firmino injured. Liverpool are still, by a considerable margin, the league's best team in attack, both in terms of xG and goals scored.

In defense, the loss to West Ham featured an uncharacteristically poor performance from goalkeeper Alisson and a shaky game from the backline. However, the club remain in the Top 5 in most defensive metrics, and with Virgil van Dijk and Joel Matip ahead of Alisson, and the fantastic Fabinho ahead of them in midfield, their ceiling defensively remains incredibly high.

While Liverpool suffered an unexpected blip ahead of the international window, it has been all good for Arsenal entering the break.

For as well as Arsenal have rebounded from a disturbing start, however, there is further context needed. During their eight-game unbeaten run, they've defeated Norwich City, Burnley, Tottenham, Aston Villa, Leicester City, and Watford. That's three of the bottom six teams in the Prem, a Spurs team in free fall, and a quality win against Leicester.

However, even the win over the Foxes isn't as decisive as the result suggests, as Arsenal were out-created in xG, out-possessed considerably (64 to 36 percent), and had nearly half of Leicester's shots on target. The home side simply came out flat, down 2-0 by the 18th minute, and were unable to claw back into it.

If this game was played in London, we may like Arsenal's chances of getting a result. However, at Anfield, against a fresh and motivated Liverpool team is as tough of a spot as it gets in the Premier League.

Between Liverpool's attack and Arsenal's defense, it's easy to quickly point toward the Over as the likely result.

Even as Arsenal have tightened up defensively, with back-to-back clean sheets in the Prem, they have continued to allow a considerable amount of chances, averaging over 1.0 xG against per game during their eight-game unbeaten streak.

In attack, Liverpool have been a force of nature regardless of the opponent, but they're even stronger at Anfield. In five home Premier League games this season, Liverpool have only failed to score multiple games once — a 1-1 draw with Chelsea in which they created 2.6 xG

Meetings between these two clubs have been high-scoring in recent years, with the previous 10 Premier League fixtures averaging 4.3 goals between them. In both fixtures last season, Liverpool scored three themselves and they are easily capable of repeating that feat on Saturday.

On the flip side, having allowed five goals in their previous two Premier League games, it's difficult to trust a clean sheet for the Reds, either.

After an incredible start to the season, which saw Salah score in 10 consecutive games, he has now gone three straight games without scoring for club. He is, however, one of the Premier League's greatest ever players and in the conversation as the best player currently, so it's just a matter of time until he finds the back of the net again.

Salah has seven goals in nine Premier League games against Arsenal, and he will be coming up against a left-back in Kieran Tierney who, while excellent going forward and clearing the ball in the penalty area, hasn't performed well in 1-on-1s. Salah played just 32 minutes midweek for Egypt, so he should be coming back to his club fresh, too.

While Arsenal have salvaged what started off looking like a terrible season, their defensive record remains suspect. They have conceded the eighth-most xG and six of 13 goals allowed this season have been from right-sided players. It's an area of the pitch where Arsenal can be exploited, and it's where Salah has spent half a decade tormenting Premier League defenses. 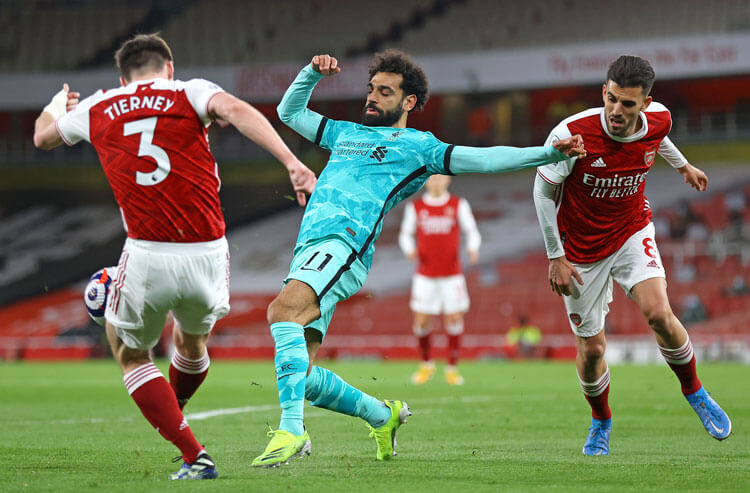 Liverpool vs Arsenal Picks and Predictions: Gunners Lack Firepower at Anfield
Provided by