Real Madrid have clearly established themselves as the team to beat in Spanish soccer this season. They sit comfortably atop the table, and as the odds-on La Liga title odds favorites after eight weeks of play.

Spanish soccer odds are heating up as the new La Liga season has eight weeks in the books.

To nobody's surprise, juggernauts Real Madrid and Barcelona are among the leaders in La Liga championship odds... but they're not alone as there's another club right in the mix of the Spanish soccer futures board.

Live odds below courtesy of DraftKings Sportsbook are current within a five-minute delay.

Favorite to win the La Liga

Real Madrid are off to a red-hot start in La Liga play, still sitting in first place at 5-2-1, scoring over twice as many goals as their opponents thus far. They were dealt their first defeat of the season in a frustrating 2-1 loss to Espanyol in Matchweek 8, bringing them back closer to the rest of the pack, but remain -120 favorites.

Sitting second on the odds board at +225 is defending La Liga champion Atletico Madrid. With Antoine Greizmann back with the squad on loan, Atletico have gotten off to a strong start, rebounding from Matchweek 7's loss to topple Barca 2-0.

After the departure of mega-star Lionel Messi, FC Barcelona sunk from their status as favorites. But early-season struggles have slid their odds even further, now in third at +650. Despite the addition of Memphis Depay, Barca have stumbled out of the gate and tallied just 12 points through seven matches to sit ninth on the table. Oddsmakers are trusting them to round into form, and they will also benefit from the not-distant return of injured striker Sergio Aguero, among a rash of early injuries.

Sevilla have helped narrow the gap between the Top 3 and the rest of the field, even with their outright price dipping slightly to +1,100 after a loss to Granada in Matchday 8.

Last season, Atletico Madrid won their 11th La Liga title, but it's rare to see Barcelona or Real Madrid not claim the title. Here are the previous La Liga champions over the last ten years:

La Liga futures odds are constantly adjusted throughout the offseason due to player transfers and injuries. Once the season begins, title odds will change as teams win and lose games and as more players get hurt or suspended. Sportsbooks will also adjust La Liga odds based on handle and liability to certain teams.

La Liga futures odds will usually look like this:

This means that on a $100 bet, you'll stand to win $350 if Barcelona wins the La Liga title. If it's close to the end of the competition, or a club has been particularly dominant, you might see them with a minus sign (-) ahead of their odds.

This means that you would need to bet $500 to win just $100 on a Real Madrid championship.

Above we have posted the American odds for La Liga. However, these are easy to convert to decimal odds or fractional odds with our odds converter tool.

Where can I bet on La Liga title odds?

As one of the premier soccer competitions in Europe, almost every online sportsbook and casino will provide La Liga futures odds. Check out the best soccer betting sites where you live and see what La Liga betting odds they currently offer. 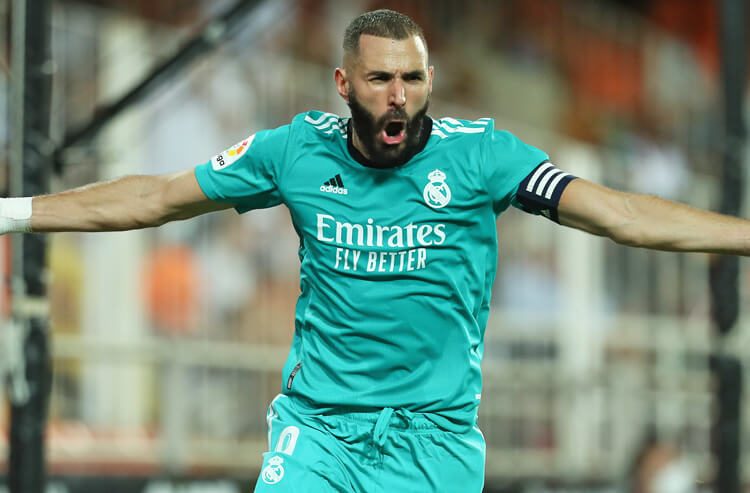