Crystal Palace vs Newcastle Picks and Predictions: Palace Give Another Top-4 Side Trouble

Crystal Palace halted Man United's resurgent form midweek and can now perform as a similar roadblock to the Top-4 challenging Newcastle United. Our EPL picks highlight the betting value on Palace on Saturday.

One of the hottest teams in the country head to South London on Saturday, as Eddie Howe's Newcastle United visit Patrick Viera's Crystal Palace.

Newcastle put a pair of 0-0 draws behind them last weekend, surviving a penalty scare from Fulham in a 1-0 win with a late winner from club-record signing Alexander Isak. Palace, meanwhile, derailed Man United's resurgence midweek as a fantastic Michael Olise free kick helped them take a point off the visiting Red Devils.

Ahead of Saturday's late kickoff in Premier League action, check out our picks and predictions for Crystal Palace vs. Newcastle United on January 21.

For the better part of 13 months now, Newcastle United have been one of the Premier League's best sides, with only Arsenal, Man City, and Liverpool taking more points since January 1, 2022. The push for a Top 4 spot is well and truly on, and they're a pair of games away from their first cup final this millennium.

Spirit is high Tyneside but the Magpies' season will see a rare downturn this weekend, with a tricky fixture at Selhurst Park.

Palace haven't quite kicked on from an encouraging 2021-22 campaign, but their South London fortress remains an imposing place for opposition. Patrick Viera's side has taken 1.4 points per home match and has nearly a neutral expected goal difference per 90, at -0.33 (compared to 1.00 points and -0.56 xGD/90 away from Selhurst Park).

With just a single, last-second loss to their name this season, Newcastle United have performed excellent home and away. However, there certainly is a drop away from their cathedral on the hill, St. James' Park. Newcastle are taking 2.20 points per game, with an xGD/90 of +1.23 Tyneside, but those figures drop to 1.78 points and +0.20 away from the Northeast.

An even bigger miss for Newcastle than 50,000 Geordies, however, will be Bruno Guimaraes. The Brazilian midfielder will miss this fixture with an ankle injury, and Newcastle will miss so much as a result. Not only is Guimaraes their standard-bearer, as their best player in the middle of the park, but he also pulls the team's strings moving forward, protects the backline in defense, and can break a press like nobody else Newcastle have.

A pillar of this overperforming Newcastle side is their relentless physicality and while Bruno isn't necessarily an example of that, his technical ability enables Eddie Howe to sacrifice skill for physicality elsewhere in the team, with pressing monsters Sean Longstaff, Joelinton, and Joe Willock all benefitting.

As we saw in Newcastle's FA Cup loss to Sheffield Wednesday, this is still a thin squad that's top-heavy in talent. There's no player that can replicate what Bruno does on or off the ball, or for those around him.

Everything about this fixture shapes up to be difficult for Newcastle, and add in their looming EFL Cup semifinal against Southampton, and it's easy to see Crystal Palace getting a home result on Saturday.

B) Callum Wilson, Miguel Almiron, and Wilfred Zaha to record 1+ shots on target each BOOSTED to +450 at Betway! Bet Now

Crystal Palace vs Newcastle side analysis

The clash between Palace and Newcastle figures to be an exciting, compelling match, but there's little action to be had on a side beyond the Palace/draw double chance.

Between -110 and -120 on the 3-way moneyline, Newcastle are well worth backing from a price standpoint. However, there are just too many factors to expect the Mags to take all three points, between the environment, Guimaraes' absence, and the looming semifinal. Meanwhile, their double chance odds are -550.

On the flip side, Palace's 3-way price of +350 is appealing in a vacuum but not with the opposition they'll see. Newcastle are going to make this match ugly, slow, and choppy. It's their best route of getting a result and they very well could be successful in taking a point back to Newcastle.

A Palace team that's taken five of their six wins on the season off of teams sitting 15th or below in the Prem isn't going to suddenly be able to break down the league's best defense and one of the most physically imposing sides in the country.

This result is going to be a fight.

The 2.5-goal total is correctly leaning considerably to the Under (-143), with the Over coming back at a generous +110.

Newcastle have the best defensive record in the Premier League, with just 11 goals conceded across 19 games. New signing Nick Pope and his formidable backline have proven their worth, with their xGA 17.4 — still an excellent mark but something that underscores the difference Pope's shot-stopping has made.

That defensive rigidity has been needed, too, with Newcastle's attack relatively poor since the New Year. Striker Callum Wilson hasn't been in great form since returning from the World Cup, while leading scorer Miguel Almiron hasn't scored since Boxing Day.

Any positives that can be taken from Isak and Allan Saint-Maximin's returns to full fitness are negated, for the most part, by Guimaraes' absence behind them.

Though Palace's defensive record has regressed from last year — from 1.21 goals and xGA per game to 1.42 goals against and 1.38 xGA — I don't believe Newcastle's attack is performing at a level that could truly punish the hosts.

A clear evening in South London awaits Newcastle and Crystal Palace. Temperatures at kickoff will be around a brisk 40 degrees Fahrenheit but no rain and little wind are forecast. 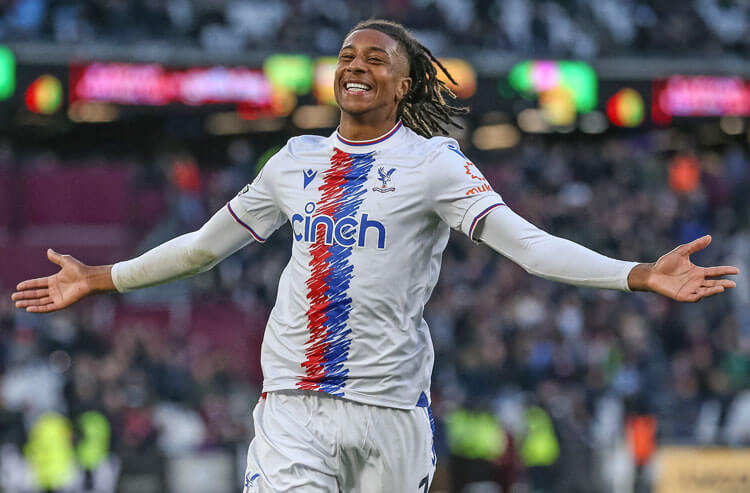 Crystal Palace vs Newcastle Picks and Predictions: Palace Give Another Top-4 Side Trouble
Provided by