Martin Odegaard is in the form of his life for league-leaders Arsenal, and his job gets a lot easier on Sunday with Casemiro suspended. With Manchester United grappling with an undermanned midfield, our EPL picks like Odegaard to shine.

Arsenal host Manchester United at the Emirates Stadium with an opportunity to bury the Red Devils’ title hopes. A win would see the Gunners move 11 points clear of third-place Man United and stay at least five points clear of Man City, with a match in hand.

For the visitors, a 1-1 draw midweek was a massive blow to Erik ten Hag’s side, and it also cost them the services of Casemiro for this matchup through yellow card suspension. Now he must find a way to repeat their September win over Arsenal, and avoid the home side winning against Man United for the sixth time in the last eight at the Emirates.

Can Marcus Rashford cause problems again for the host as he did in their last meeting, or will Martin Odegaard dominate the center of the park without Casemiro involved? Find out in our Arsenal vs. Manchester United picks and predictions for Sunday, January 22.

The first meeting between these two clubs was an entertaining 3-1 Manchester United victory at Old Trafford. It was a key moment in the season for the Red Devils, a point where they announced they were a real threat to be dealt with after a rough start to the campaign.

Man United did not have Casemiro in the midfield that day, and still managed to win, but they were somewhat fortunate to do so. Arsenal had a goal ruled out controversially when Gabriel Martinelli scored just 12 minutes in, but VAR took it away after they deemed Odegaard had fouled Christian Eriksen in the buildup.

While Arsenal put just three of their 16 shots on goal, they had plenty of opportunities. Those opportunities often involved Odegaard at some point. He created four chances, including one big chance, but managed just one shot. That said, he had a combined expected goals and assists of 0.69 on the day and completed six passes into the final third.

As solid as he was that day, he’s in phenomenal form at the moment. Odegaard has registered three assists and scored four goals in his last five starts in the Premier League. Only in the 0-0 draw with Newcastle did he fail to be involved with at least one goal.

According to Opta, Odegaard is second on the team with 2.6 shots per 90 minutes from open play, and only two players average more than his 1.8 chances created from open play. He’s also been a master at getting into dangerous positions without the ball, with more than a quarter of his passes received this season coming just outside the opposition’s box.

Now, he’s going to have the run of the midfield without Casemiro. The Brazilian midfielder has the second-most tackles and ranks third in possession won among all midfielders since his first start for Man United back in October.

With Casemiro not there to protect the back line, this will put immense pressure on Fred — who simply lacks the incredible defensive awareness his compatriot possesses — and possibly McTominay, who is often caught out of position and lacks the discipline needed against a good midfield.

The moment Casemiro was suspended, I began waiting to jump on Odegaard to score or assist and pounced on it as soon as it was offered. Now I’m encouraging you to do the same.

Odegaard is one of the hottest players in the Premier League at the moment, and getting him at even money to be involved in a goal at home against a weakened midfield is too good to pass up.

My best bet: Martin Odegaard to score or assist (+100 at FanDuel)

Arsenal vs Manchester United side analysis

Arsenal have tasted defeat just once in the Premier League this season, the 3-1 loss to Man United. Since then, they’ve won 10 of 12 and defeated Tottenham 2-0 last weekend in the North London Derby. Mikel Arteta’s 4-3-3 formation will almost certainly see Bukayo Saka and Martinelli flanking Eddie Nketiah, with Gabriel Jesus out long-term due to a knee injury.

Fred or McTominay should fill in alongside Eriksen in the middle of ten Hag’s 4-2-3-1 formation, and Wout Weghorst will likely see his second start following his loan deal as fellow striker Anthony Martial is a doubt.

The Red Devils have lost five of their last seven visits to the Emirates, and they’ve won just four times in their 10 away matches this season. Arsenal have dropped points just once, in that aforementioned draw with Newcastle, in their eight home league fixtures this campaign.

Given the location of the match and the absence of Casemiro, it’s about right that Arsenal are minus odds in this fixture. The draw does offer a tempting price, at nearly 3/1, and might be worth taking a look at.

Arsenal can score goals in bunches, and Aaron Ramsdale has been heroic at times at the back to keep them from having more goals allowed than perhaps they should. Arsenal have kept two consecutive clean sheets, with just two total goals scored in those outings. Six of their last nine Premier League matches have seen two or fewer goals scored, with one of those Overs being a 5-0 thrashing of Nottingham Forest.

In their last four visits to the Emirates, Manchester United have scored just once, in a 3-1 defeat last April. Their last two away matches have gone Under 2.5 goals, as have half of their 10 away tilts. The total in Man United’s matches has been all over the place at times, but five of their last seven have gone Over.

Temperatures on Sunday will be chilly, with highs in the low 40s. There will be no wind to speak of, and there is zero chance of rain in the forecast. 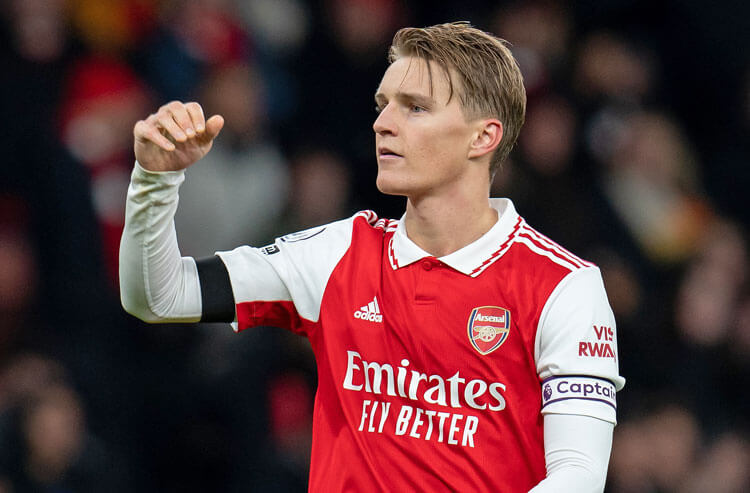