Did Washington's win over Dallas predict the 2020 Election result?

According to a long-running "rule", Washington's home win over Dallas in NFL Week 7 means that Donald Trump will win the 2020 U.S. Election. The "Washington Rule" has correctly called 18 of 22 election results but is 1-3 the past four presidential election

The nation – and the world – are counting down to November 3 and the U.S. Presidential Election. But while the ballots have yet to be counted in this battle between Donald Trump and Joe Biden, the result of the election may have already been decided… by a football game.

That’s right. When the Washington Football Team defeated the Dallas Cowboys 25-3 last Sunday, they not only snapped a five-game losing skid but handed the presidency back to Trump for another four years, at least according to a long-running election-year trend formerly known as the “Redskins Rule”.

The “Washington Football Team Rule” – as it would be known now – states that when Washington wins its final home game before Election Day, the incumbent party retains office and when it loses, the opposing party will take over the presidency.

This trend has been around since 1932 and has hit with accuracy in 18 of the subsequent 22 elections, including a perfect 17-0 mark predicting the president from 1936 to 2000. However, the wheels have wobbled in recent years, with the “Washington Rule” going just 1-3 over the past four elections, including Trump’s victory in 2016.

The Washington Football Team have a bye his week and play their next game at home against the New York Giants on November 8 – five days after Election Day. That means the Week 7 result versus Dallas is the deciding home game for this rule.

If you buy into this trend, then the time to bet on Trump is now. The president is set at +163 to win the election, with Biden pegged as a -190 favorite. Early poll projections lean toward the Democrats, but as we saw in 2016, the early projections don’t mean squat.

Trump entered Election Day 2016 as a +400 underdog versus Hilary Clinton and jumped as high as -10,000 that Tuesday night as the results rolled in across the U.S.

Another football matchup with predictive power has been the Alabama-LSU rivalry in the SEC. A Crimson Tide victory signaled an election victory for the Democrats while a Tigers’ win meant the Republicans would take over the Oval Office.

This rivalry trend had correctly called the winning party for eight straight elections, from 1984 to 2012, however, Trump's 2016 election win bucked this trend with Alabama beating LSU 10-0 on November 5, 2016 – three days ahead of Election Day.

This year, Alabama and LSU don’t play until November 14 with the Crimson Tide likely set as sizable road favorites versus the Tigers. So it looks like we're stuck with Washington's victory over "America's Team" to determine America's next president. 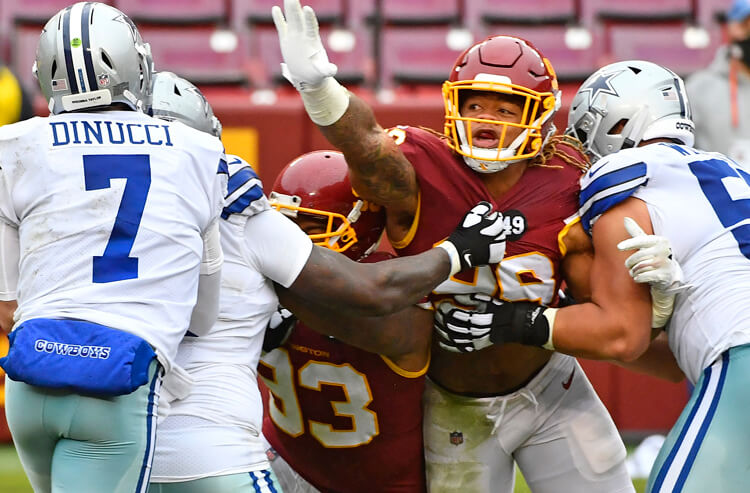 Did Washington's win over Dallas predict the 2020 Election result?
Provided by