Travelers Championship Picks and Predictions: Bryson Can Bounce Back

Bryson DeCheambeau's meltdown last weekend cost him another major title, but he's back atop the odds board this week and has a great game for TPC River Highlands. Find out why he's among your best bets with our Travelers Championship picks.

After flirting with the top of the leaderboard at an entertaining U.S. Open, the PGA Tour's most heated rivals both head East for this week's Travelers Championship at TPC River Highlands.

Bryson DeChambeau and Brooks Koepka will renew hostilities in Connecticut this weekend after strong showings at the third major of the 2021 season. It's no surprise to see them atop of the PGA odds leaderboard for this week – but can they rebound from last week's pressure cooker on just a few days' notice?

We preview the field and break down the course with our Travelers Championship picks and predictions.

This is the shortest layout most of these players will see all season, coming in at a shade over 6,800 total yards – and that puts two schools of thought into play. Those who can "bomb and gouge" with success (which is easy enough to do here, with the rough hardly punitive) will be rewarded with short irons into generous greens. Shorter drivers, meanwhile, aren't penalized with long approaches.

Since SG: Off-the-Tee is rendered largely irrelevant here, we'll be focusing on iron play instead – particularly players who excel in the 100-to-175-yard range. The entire field will be able to throw darts at these pin placements, so whoever comes in with the best ball-striking ability will give himself plenty of short birdie opportunities at an event that should yield super-low scores.

It's a get-right tournament for several players who disappointed at Torrey Pines last week – none moreso than DeChambeau, who comes in as the +1,400 co-favorite along with Dustin Johnson. Patrick Cantlay is next at +1,600, with Paul Casey at +1,800, Koepka and Patrick Reed at +2,200 and Scottie Scheffler and Brian Harman at +2,500.

Who will win the Travelers Championship? Here are our best picks:

Hoo boy, what a meltdown. Those of you with DeChambeau tickets are still frothing over a back nine that included bogeys on the 11th and 12th holes and a double-bogey on the 13th. He followed that up with the piece de resistance – a quadruple-bogey 8 on the par-4 17th that not only took him out of title contention, but dropped him outside the Top 25. That said, he's still one of the most skilled golfers on the planet, and has three straight Top-10 finishes here. We like the added motivation for this week.

You'll get one of two versions of Henley this week: The one exhausted by last week's incredible U.S. Open run (in which he was at or near the top of the leaderboard for the opening 54 holes before sputtering on Sunday en route to a T13) or the one that will build off that great result this week. We're leaning toward the latter – particularly given the fact that Henley is one of the premier iron players on tour this season, ranking fourth in SG: Approach (0.859) and 15th in Greens in Regulation percentage (68.9 percent).

Reed is on quite the run, He has four Top 10s over his past 11 tournaments and salvaged an otherwise mediocre U.S. Open showing with a final-round 67 that vaulted him into a tie for 19th place. He has made the Top 30 on five occasions at this tournament, and closed last year's event with a 64 to slide into the Top 25. Reed has a terrific all-around game that is hampered only by his terrible GIR success rate (61.6 percent, 181st) – and that shouldn't be a problem this week.

Higgo has flashed both style and substance since coming over from the European Tour (and winning just his second career PGA Tour event). And while he struggled in his first taste of U.S. Open action, we can't ignore his incredible showing a week earlier at the Palmetto Championship, where he rattled off four straight sub-70 rounds to top an impressive field. Higgo has gained shots in nearly every major category through his first 10 PGA rounds, and should feast on a course built to maximize his numerous strengths.

Casey has been positively dominant at TPC River Highlands, racking up four Top-5 results (including a pair of runner-up showings) in six all-time appearances. He couldn't make a putt or capitalize on the par-5s last year and still finished 32nd, and has scored higher than 70 in just three of his 24 rounds on this course. His iron game is consistently one of the best in the World, and having finished T4 and T7 at his past two U.S. tournaments (both majors), his game is in a great place.

We swear we're not picking on Lefty just because he made us (and just about every other betting expert) look foolish at the PGA Championship. But he has still made just 10 of 17 cuts this season and looked washed over the final two rounds of last week's U.S. Open. Now he's going to travel across three time zones to tee it up against a stronger-than-normal field on a course where just about anyone can shoot double-digits under par? Sorry, Phil, but we don't like your chances of reaching the weekend. 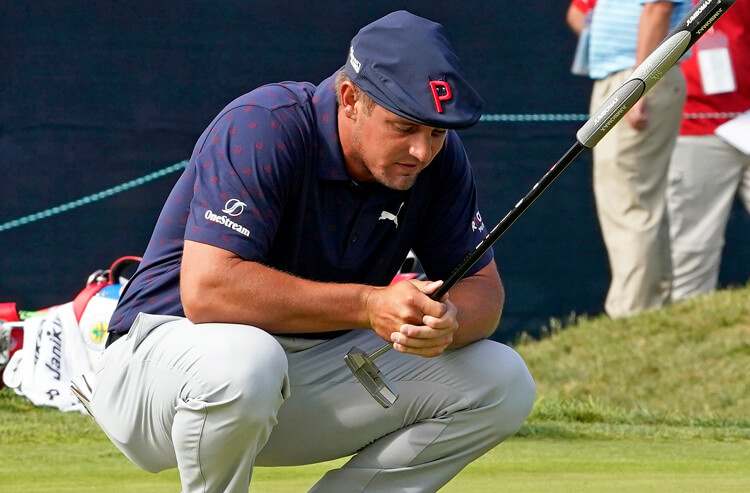 Travelers Championship Picks and Predictions: Bryson Can Bounce Back
Provided by