Our betting card for the Tour's season finale at East Lake features another weekend push from Jon Rahm, a final strong showing from Cam Young, and yet another asterisk win for Xander Schauffele. Read more in our TOUR Championship betting preview below.

After another win at the BMW Championship, Patrick Cantlay comes into East Lake starting two shots back of Scottie Scheffler. That’s right, it’s TOUR Championship week and someone is going to take home $18 million.

With the starting strokes in play and only 30 players in the field, we’ll need to lay more juice this week, but there is still value to be had.

In this blog, we’ll find the best bets from the top finishers and head-to-head matchups markets.

B) Patrick Cantlay or Scottie Scheffler to win BOOSTED to +300 at Betway! Claim Now

East Lake is a Par 70 playing 7,319 yards with a lot of long Par 4s and lengthy Par 3s. It's scorable though, which gives players starting near the bottom of the leaderboard a chance to string together birdies and move up.

Remember Kevin Na actually tied with Rahm for the lowest score here last year to move up from starting in 16th to finishing 3rd.

Morikawa was in the mix until he completely disintegrated on Sunday. His tumble down the board was alarming but also indicative of his whole season where he has flashed some form and then ultimately came up short.  You have to wonder if he’s feeling 100% and if his putting will continue to cause him problems.

Conners is historically a terrible putter but he’s been rolling it better than Collin over the last 24 rounds. He’s also been better both off the tee and with his irons, which is why he’s gaining so many more scoring opportunities than Morikawa. The Canadian beat Kawa by five here last year (without strokes) and we think he’ll beat him again with both players starting at -1.

Fitz was pretty bad last week losing 7.7 shots with his irons. He only gained 0.8 at the St. Jude so we’re thinking it’s a problem for him. Had he not gained four on the greens in Delaware, he would have finished much worse than 48th in the 68-man field. He’s never been good in the playoffs which explains why this is his first TOUR Championship.

Young will be looking to go out with a bang in his rookie season. He ranks 14th in the field in approach over the last eight rounds vs. 24th for Fitz. He’s also much longer off the tee, has been gaining a lot more birdies and scores better on long Par 4s. Stats aside, we like the motivation and the energy that we think Young will bring this week.

Rory might be running out of gas and will be busy with the media this week, answering questions about the players meeting and his newly-announced venture with Tiger. Rahm just looks desperate to make something happen in the season finale.

Over the last eight rounds, the form for Rahm has been improving and he now ranks ninth in the field in putting vs. dead last for Rory. Putting is what has been holding Rahm back all season. Even if Rory gets off to the hotter start, we see Rahm making a weekend charge once again.

Stallings had a putt for a playoff last week and he’s only starting seven shots back of the lead at East Lake. He’s one of the longer players in the field and his driving returned to good form last week after a short slump. He also gained six shots with his irons and that makes seven out of 10 weeks gaining three or more shots on approach. He’s making his East Lake debut but we like the setup and the form.

Scott needed a classy up-and-down from the bunker to get into this tournament and he’s starting 10 shots back. But, is this his last Tour event before he joins LIV?

Scott sure looked dialed in last week and gained across the board, even with his putter. That’s two weeks in a row gaining 6.4 and 2.8 with the flat stick. He’s played 20 rounds at East Lake and has the best approach stats in the field there. Bermuda might be his worst surface but we think he’ll be hitting it close enough to march up the board.

Xander didn’t have his A-game on Sunday but his form with the driver and irons really returned after a poor week at Wyndham. He’s tied with Rory for the best overall strokes gained number at East Lake and ranks near the top in recent Par-5 scoring, driving distance, good drives gained, short putts, long putts, and 3-putt avoidance.

Xander is also Top 5 in recent birdies-or-better gained and first in eagles gained over the last 24 rounds according to Fantasy National. Plus, if there’s an asterisk to be won, this multi-time no-cut and gold medal winner is the man for the job. 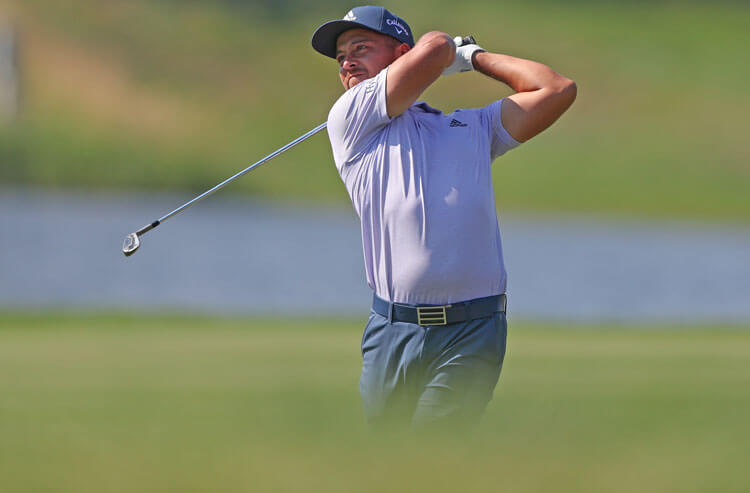