The Match 5 Picks and Predictions: Bryson and Brooks Go Head-To-Head

The moment we've all been waiting for: Brooks vs. Bryson. The two go head-to-head at Wynn Golf Club in Vegas with one appearing to be in good form, and the other... not so much. Check out our picks, predictions, and more before watching The Match 5.

Two of the most controversial golfers will tee it up for a Black Friday grudge match in Las Vegas this week, with a lot of cash (and bragging rights) on the line. Brooks Koepka vs. Bryson DeChambeau odds have Bryson listed as a slight favorite heading into the match.

It’s the next edition of Capital One’s “The Match” and a much-anticipated next chapter in the Bryson vs ‘Brooksie’ beef saga. There will be no quarterbacks to slow these two down — nor skew our golf betting picks — in this 12-hole match play event to be broadcasted on TNT beginning at 4:00 p.m. ET on Friday, November 26 from the Wynn Golf Club.

The Wynn Golf Club 12-hole setup for The Match 5

The Wynn Golf Club has a lot of hazards in play for a resort course located right on the Vegas Strip. It’s a Tom Fazio-design that plays just over 6,700 yards from the back tees with a unique configuration of holes. There are six Par 3s and four Par 5s. DeChambeau and Koepka will play a selection of 12 of these holes (or less if the match is won sooner) that were chosen by TNT and PGA Tour representatives. The order of play is expected to be 16, 3, 12, 13, 11, 5, 14, 9, 7, 8, and 18.

Hole No. 7 is a long-drive challenge. Both guys hit it plenty long and Brooks has probably worked to get his speed up a bit for this event. However, he does not have the extra gear that Bryson possesses, and we have seen Bryson unleash that hell on national TV multiple times now like hole No. 6 at Bay Hill.

It’s tempting to take -155 for Bryson to just win the long drive challenge, but we think he’ll put himself in birdie or better position by doing so. If Brooks tries to outdrive Bryson here, then there’s a good chance he ends up out of position and loses the hole.

No. 12 at the Wynn will play as the third hole for The Match. It’s a long Par 3 measuring over 210 yards, and both players are very good historically from 200 yards plus. It’s just a mid-iron for them, but at the same time less likely to be a birdie hole for either. The most likely outcome is matching two-putt-pars and a tie on 12.

Bryson should win more of the Par 3s based on his approach game advantage. Brooks has had terrible approach numbers since the Open Championship, losing more than 1.5 strokes to the field with his irons in six of seven events. Meanwhile, Bryson has gained strokes on the field with his single-length irons in four out of his last seven tournaments

After the line opened closer to even money, Bryson has now emerged as the betting favorite. While we haven’t seen DeChambeau play in an actual event since the Ryder Cup, social media indicates that he’s working hard on his game. We also know that he’s been down here in Georgia grinding away at Pat’s gated community. So, we don’t expect rust from Bryson.

Brooks on the other hand has made multiple appearances on tour this Fall and has been far from in form. Koepka has missed two cuts in a row while losing strokes in every category but putting at Houston and Mayakoba. Additionally, Koepka has been hot garbage when it comes to Par 3 scoring and generating scoring opportunities in general. He also has had a lot of trouble finding fairways recently.

This match won’t be a cakewalk for Bryson if he sprays it at all off the tee and Koepka somehow gets his off-the-tee game together. However, that may be Koepka’s only path to victory. We’ll take the better ball striker, better scrambler, and better putter who is in better form. 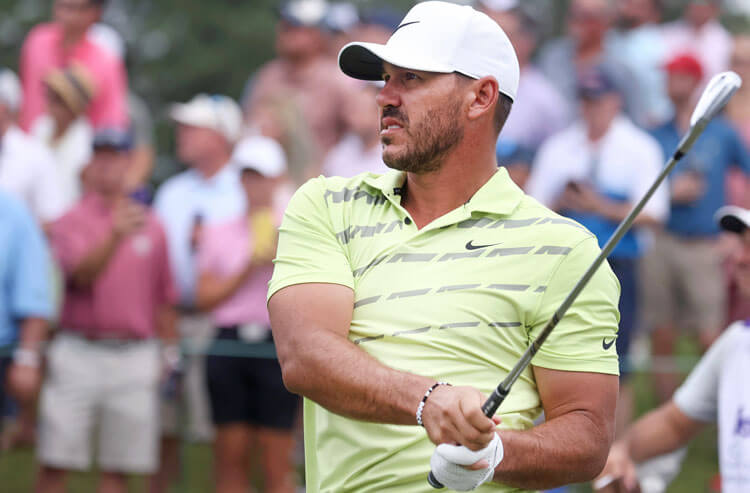 The Match 5 Picks and Predictions: Bryson and Brooks Go Head-To-Head
Provided by