The Tour heads back to St. George's for the RBC Canadian Open, the first time this course has hosted the event since 2010, and it's a top-heavy field. Among our picks, we like Sam Burns to build on his recent success by besting Shane Lowry. 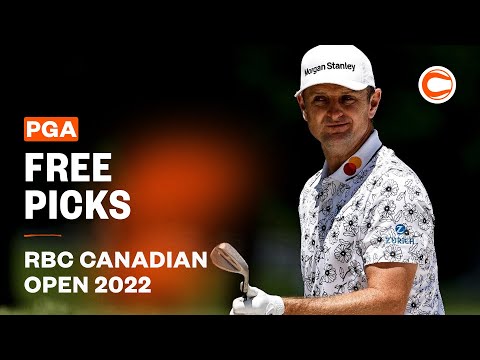 With the U.S. Open looming, we head north of the border for the RBC Canadian Open.  Dustin Johnson won’t be there, but the likes of Rory McIlroy, Justin Thomas, Scottie Scheffler, and Sam Burns are among the favorites teeing it up in the RBC Canadian Open odds. They are joined by a mixed-bag field of players preparing for the year's third major and others hoping to find their way in.

It’s a highly variable week for betting. First, this course will be new to most players. Plus, with all the U.S. Open prep, the longest day in golf, LIV, and travel narratives swirling around, it’s hard to pin down those who are most primed to win outright. So, we’ll focus on the longer shots who could emerge as top finishers in this field along with some high-value head-to-head matchups.

If you're signing up for a new sportsbook for the RBC Canadian Open, here are two of the best bonuses* available:

We haven’t seen this course since 2010. St George’s Golf and Country Club has since gone through a major greens renovation. It’s a Par 70 that plays 7,000 yards over a tight and narrow layout that includes four Par 3s over 200 yards. Missing fairways can leave you blocked out from the green on a lot of approach shots at St. George’s, and we’ve heard the rough is thick and gnarly, too. So precision players should handle this place best.

Rodgers comes in striking the ball much better than Champ. Over the last 24 rounds, Rodgers ranks 50th on tour in approach vs. 90th for Cam. Rodgers is also doing much better around the greens recently, ranking 49th in sand saves and 21st in scrambling vs. the field while Champ is north of 120th in both categories.

The inconsistent Hubbard is cashing a lot of medium-sized checks on the tour this year, as usual. He never scratches contention but he has managed to make the cut in 60% of his starts with unimpressive stats. He’s lost strokes off the tee in six of 10 starts and has only gained more than a stroke on approach once in 2022.

Long, meanwhile, has upside. He’s won on tour before and is much more consistent both off the tee and with the putter. He won’t blow anyone away with his irons but we think he can outplay Hubs here.

It feels like Lowry has been in perpetual contention this year but is always falling short on Sundays. He’s also failed to finish inside the Top 20 in his last two starts after being a popular outright bet at both the PGA and the Memorial. Shane’s approach numbers at both events were lackluster and he’s also lost shots off the tee in two out of his last three starts. He might be tinkering to find "it" before the U.S. Open while Burns is just trying to stay hot.

Burns has a win and a T20 in his last two starts and two wins since the 20th of March.  He gained a whopping 3.9 and 4.1 shots on approach at the Schwab and the PGA, respectively. Plus, he’s been driving it well, ranking 11th in driving distance and 38th in good drives gained over the last 8 rounds. Burns could get another win while Lowry keeps trying to get his act together.

Spaun’s putter has been on vacation since his win at the Valero and subsequent 23rd-place finish at The Masters. However, the rest of his game has been excellent. J.J. gained 3.2 and 3.3 shots on approach in consecutive weeks at Byron Nelson and the PGA.

He also gained around the greens and drove it well at both events. He actually ranks 13th in fairways gained and fifth in good drives gained, according to Fantasy National over his last 50 rounds on tour. That’s what you want for a course like this and he isn’t the shortest player in the field, either. If he doesn’t lose two or more shots with the flat stick again, he might be in this one at the end.

Jaeger ranks third in the field in approach, second in good drives gained, and seventh tee-to-green over the last eight rounds. He also ranks second in efficiency vs. the field on Par 3s that are 200-225 yards. We’ll see several of those at St George’s and we’re getting decent value on Jaeger after his missed cut at the Schwab. He's had back-to-back Top 20s and a 38th at the Byron Nelson prior to that. This field and course feel like another good opportunity for Jaeger to contend.

A fairway-finding Canadian? Sign us up. Looking at recent history, Adam ranks 10th vs. the field in fairways gained over his last eight rounds combined with being 32nd in approach and 31st off the tee during the same span. So, his irons haven’t been amazing but they did shine some at the Schwab. We’re betting that his approach play will return to the form we saw from him back in February, and that’s all it will take to get him inside the Top 20.