All the attention may be on the likes of Cantlay, Rahm, and DeChambeau — but there are some other great values at the final leg of the FedExCup Playoffs. One of those is Tony Finau, who highlights our picks and predictions for the Tour Championship.

We don't usually lament bad beats in this space, but Bryson DeChambeau's epic near-miss is going to sting for a while.

Thankfully, we have one more shot at hitting our outright play — and with the season-ending Tour Championship limited to just 30 players, connecting on this one will be a lot easier than your average PGA Tour betting event.

What's more: players will start with staggered scores to open the 72-hole event, with BMW Championship winner Patrick Cantlay (-10) kicking things off with a two-shot advantage over Tony Finau and a three-shot edge over DeChambeau.

We preview the field, break down the course and give our best free golf picks, predictions, and best bets for the Tour Championship at East Lake Golf Club in Atlanta.

For some bettors, this narrows down the list of feasible outright options — it's tough enough to beat some of the top golfers in the world, but starting with a seven- or eight-shot disadvantage is too steep a hill to climb. We're not saying you should fade everyone from Morikawa on down, but it might not be a bad place to start.

As for the course, East Lake Golf Club is going to play nothing like last week's track meet, with narrow fairways and brutal rough greeting the best in the world. SG: Tee-to-Green is going to be the most critical stat to weigh into your wagers this week, as strong play off the tee and dialed-in irons are the keys to success here. And with the course playing so difficult, gaining strokes will be even more difficult than usual — another strike against golfers starting with a less impressive score.

Cantlay is, unsurprisingly, atop the odds board at +350 to capture the title — but he isn't alone, with Rahm at identical odds despite starting in a four-shot hole. DeChambeau is next at +500 (and it's a safe bet that anyone who had him last week is hard-fading him in this one), while Finau (+700) rounds out the top tier.

Who will win the PGA Tour Championship? Here are our best picks:

Let's take the back half of the field out of play for the purposes of this discussion. Of the 10 golfers who will open within six shots of the lead, Finau might have the strongest case of any to pull out the win.

He's an incredible 36-under over his previous two events (highlighted by a win at The Northern Trust), ranks 15th on the PGA Tour in SG: Tee-to-Green (1.111), and has finishes of 7-15-7-17 at his past four Tour Championships here. He's a great play this weekend.

Thomas leads the second tier of betting options, with considerable distance between him and the four guys ahead of him. But you can't discount a guy who ranks third on the tour in SG: Tee-to-Green (1.448) and SG: Approach (0.888) and hasn't finished worse than seventh in his five Tour Championship appearances (including two runner-up finishes and a third-place showing).

Thomas has some work to do, but if anyone can make up this much ground, it's this guy.

Neither player kicked off the FedExCup playoffs on fire, but Johnson was at least able to rebound last week with an impressive T6 showing at the BMW Championship.

And that gives him a major upper hand over Morikawa, who missed the cut at The Northern Trust and struggled mightily en route to a T63 showing at the BMW Championship. There's just no way you can trust Morikawa at this point — and even if he turns things around, this is a tough matchup against a game opponent.

Schauffele would be a really great outright pick were he not starting the tournament in an eight-shot hole. As it stands, he's a great option against McIlroy, despite struggling since his Olympic gold-medal victory earlier this month.

Schauffele is the runaway leader in strokes gained per round at East Lake (3.56), with a victory and two runner-up finishes in four events played here. No player in the field has had more success on this course, and that makes Schauffele the superior play.

You'd also be smart to consider Schauffele here (+1,200), but since we've used up our Xander play, we're rolling with Rahm as the odds-on favorite to post the lowest score in Atlanta this week.

Rahm has gained 2.18 shots per round at East Lake over the course of his PGA Tour career, and with 14(!) Top 10s in 21 tournaments this season, being in contention is just what Rahm does. Need a little more convincing? He leads the tour in SG: Tee-to-Green (1.781).

McIlroy has gained nearly three strokes per round at this tournament in his lifetime (punctuated by wins in 2016 and 2019), ranks eighth in SG: Tee-to-Green (1.273), and looked dialed in en route to a fourth-place finish at the BMW Championship. 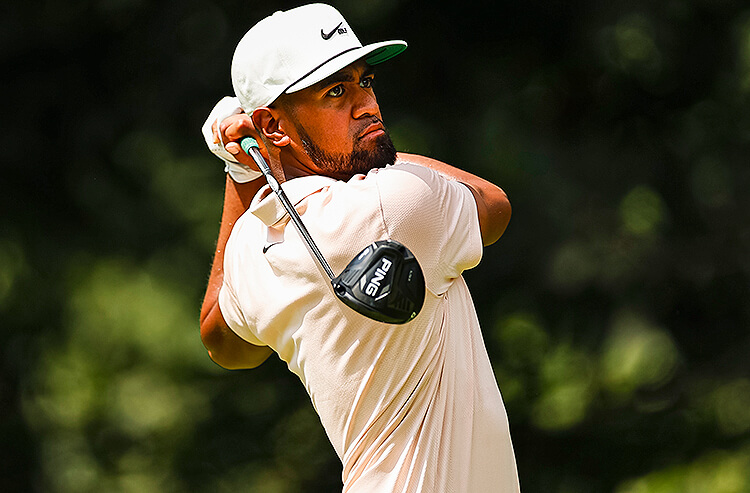