We've officially arrived at the second major on the golf calendar. With one of the strongest fields of the year, we highlight Hideki Matsuyama, Shane Lowry, and much more in our PGA Championship betting picks and predictions. 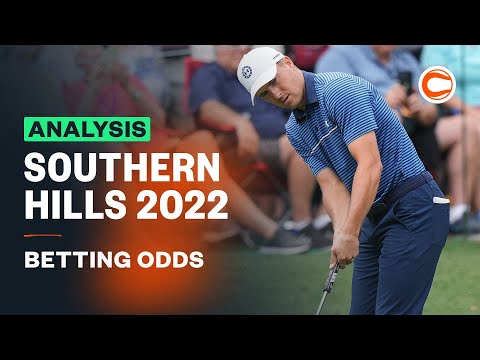 The second major championship of the year is upon us as the best players in the world head to Tulsa, Oklahoma for the PGA Championship odds at Southern Hills. The course received an extensive redesign from Gilbert Hanse back in 2018, bringing the course back to its 1935 roots. This course has hosted multiple major tournaments in the past but is going to play much differently this time around.

The field consists of 156 players, and the cut will take place after Round 2 and include the Top 70 and ties. Southern Hills will play to a par of 70 and play between 7,300 and 7,500 yards depending on the daily setup. The fairways are fairly generous at around a 40-yard average, while the Bermuda rough is shorter than we typically find in majors, but it’s unpredictable in terms of how the ball will come out.

The Bentgrass greens only average around 5,200 square feet, and they play even smaller with shelves, undulations, and roll-offs to repel golf balls in every direction. Finally, the course features “short grass” areas all around these greens so that when approach shots inevitably roll off the putting surfaces, they roll into nasty bunkers or far enough away requiring the best of touch to chip it back on the surface.

Check out our full lineup of PGA Championship betting picks and predictions.

If you're signing up for a new sportsbook for the PGA Championship, here are two of the best bonuses* available:

A major championship test is meant to force the cream to the top as the best players typically end up holding the trophy because they just did everything well that week. While we certainly see exceptions, handicapping a major needs to involve every facet of the game to be evaluated. However, Southern Hills will most likely come down to the best iron play and best scrambling ability around the greens.

Longer hitters will have an edge, but you also need grinders in a major. You need guys that won’t get rattled with bad breaks, bad lies, or uncontrollable outcomes. Patience and grit should be rewarded at Southern Hills. Late on Sunday afternoon, you’re going to want the guy that can hang in there when the course and golf gods deal a bad blow…you want the guy that can get it up and down when he makes a bad swing. Par is your friend in majors, but patience is essential.

If you’ve followed the Tour Junkies closely in 2022, we’ve been bullish on Keegan Bradley and bearish on Tyrrell Hatton damn near every week this season and it’s paid off. Hatton is so dependent on his short game as his ball-striking comes and goes like our own golf swing as eight handicaps.

He also isn’t the picture of patience. You will get tough breaks at Southern Hills, and how you deal with them will make or break you. Keegan on the other hand has been tremendous this year with two near-wins on tough courses in tough conditions against strong fields. His ball-striking is as good as it’s ever been, and he feels way undervalued as a dog to Hatton.

This line is just ludicrous. Jordan is hitting it as well off the tee right now as he ever has and that’s trouble for the field. He’s also clearly added some distance, as his ball speeds last week at the Byron were high-170s and into the low-180s at times. His iron and short-game play has been peak Jordan for most of 2022.

The putter has been a little suspect at times, but he’ll turn it up at a major. How Jordan is a dog to Xander coming off a win at RBC two starts ago and losing his last start at the Byron by one shot is dumbfounding. This place is perfect for Jordan. This line did open with Spieth a +112 dog, but the head-to-head bettors have been firing already as it’s already shortened.

We’d say the greatest edge Aaron Wise has over Jhonny Vegas is his short game. Wise has been fantastic around the greens when you look at both the long-term and short-term numbers. Both of these guys are long hitters with great stats in the wind.

Jhonny’s irons have been slightly better, but Wise is close. Historically, they've both struggled putting on Bentgras. They’re both gaining strokes in windy conditions, But Jhonny has not historically done near as well in tough scoring conditions. Vegas has only made 5 of 13 cuts in major championships with zero Top 20s. Wise on the other hand, has made five of eight cuts in majors with two Top 20s. Both men arrive in solid form, but Wise’s short game and proven record on tough courses are putting him over the top in this matchup.

There aren’t many players that have been as hot and consistent as the Irishman, Shane Lowry. Since February, he’s logged three Top-3 finishes (including The Masters), a T12 at Valspar, and a T13 at The PLAYERS in tough conditions. He’s always been a grinder with a stellar short game, but now it seems the irons are clicking better than ever.

He gained 22.6 strokes on approach alone in those five events! Shane is just simply firing on all cylinders at the moment. He finished fourth at the PGA last year in windy, difficult conditions at Kiawah. He’s finished inside the Top 20 six times in major championships since 2018. We just love Shane's ability to grind out pars on a tough course, and the fact that his long game is clicking so well right now makes him an easy click for a Top 20 at Southern Hills.

Deki-bot continues to light it up after firing a 62 on Sunday at the Byron Nelson to finish third behind K.H. Lee. Like Lowry, Hideki’s iron play has always been top-notch and it’s been no different of late. If you couple the tremendous ball-striking with his short game — which has always been underrated due to the excellent iron play — then you’ve got a recipe for a victory at Southern Hills.

He’s played eight events in 2022, and he’s gained 42.6 strokes tee to green, an insane mark. The issue with Hideki has always been the putter. Well so far in 2022, he’s gained strokes putting in four of the eight events and arrives with good vibes after rolling it nicely on TPC Craig Ranch's Bentgrass greens.

You can get a +550 number on Bobby Mac on PointsBet, but we prefer the BetMGM number as it’s close enough, but BetMGM doesn’t have dead heat rules in place. So, if he finishes with four other guys at T20, we still get the full 5/1 payout. The Scottish lefty seems to be an unavoidable value at 5/1. He’s made the cut in all eight of his major championship starts with two Top 10s at The Open and two Top 25s at Augusta.

MacIntyre is a big game hunter and he’s arriving in solid form. He’s got plenty of distance, but he knows how to flight the golf ball in windy conditions. Given he’s only got to 100 or so legit contenders for a 20th-place finish, we think this number belongs in the 3/1 range.