A quality field highlighted by World No. 1 Scottie Scheffler and recent PGA Championship winner Justin Thomas has teed it up at Colonial Country Club for the 2022 Charles Schwab Challenge. Check out our live odds as the event unfolds. 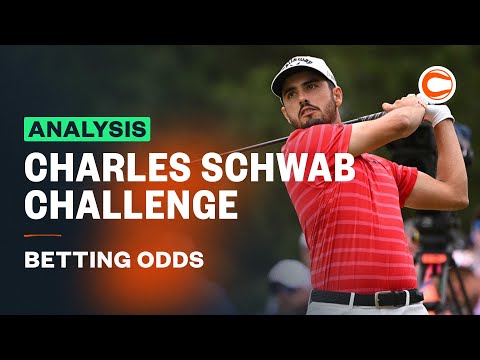 With the PGA Championship in the rearview, it's time for the Tour to make its final Texas pitstop of the season with the Charles Schwab Challenge in Fort Worth.

Can World No. 1 Scottie Scheffler bounce back? Is Justin Thomas going on a run? Will Bryson DeChambeau finally be able to play a tournament?

Here are the live odds for the 2022 Charles Schwab Challenge.

If you're signing up for a new sportsbook for the Charles Schwab Challenge, here are two of the best bonuses* available:

Despite being the tournament immediately following the year's second major, the field at Colonial Country Club in Fort Worth, Texas is not as shrunken as one may expect. FedEx Tour money leader and World No. 1-ranked golfer Scottie Scheffler is in the field. Joining him are a number of other Top-30 golfers like PGA Championship winner Justin Thomas, Collin Morikawa, Viktor Hovland, Will Zalatoris, Billy Horschel, Max Homa, and others. The purse is set at $8.4 million with the winner expected to take home $1.5 million.

No golfer has set the PGA Tour aflame quite like Scheffler has in 2022. With north of $10 million in winnings and four victories under his belt — including his -10 showing at the Masters — Scheffler is by far the PGA Tour money leader and has earned his status as the world's top-ranked golfer, according to OWGR.

Now, the 25-year-old is in unfamiliar territory: he's looking to bounce back. Scheffler missed the cut at the PGA Championship last weekend after posting rounds of 71 and 75 to finish at +6. It was his first missed cut of 2022. The last time he didn't make it to the weekend was at the Shriners Children's Open last October.

Oddsmakers aren't convinced he's hitting a slump as Scheffler's opening as the slight betting favorite at +1,100.

Fresh off his playoff victory over Will Zalatoris at Southern Hills, Thomas isn't taking a weekend off to recharge his batteries. He surged back into contention on Sunday and eventually pulled off the impressive win for his first major championship since winning the PGA Championship in 2017. It was also his first PGA Tour win in over a year.

That said, Thomas hasn't exactly been struggling. He has seven Top-10 finishes in his last 10 tournaments. The week before the PGA, he finished T5 at the AT&T Byron Nelson. He was T8 at the Masters and T3 at the Valspar. JT is in a groove and has a chance to keep it up.

After missing the cut at the Masters in early April, Spieth has done well. He won the RBC Heritage and finished second at the AT&T Byron Nelson before a T34 finish at the PGA Championship. Spieth was the runner-up at the Charles Schwab Challenge last year as well as in 2017 and 2015. He won the event by three strokes over Harris English in 2016.

It's safe to say Spieth likes the Colonial.

DeChambeau was forced to withdraw from the PGA Championship after a practice round, stating that he wasn't 100% recovered from his wrist injury. When he's attempted to push through this year, things haven't gone especially well. He missed cuts at the Farmers Insurance Open, Valero Texas Open, and the Masters.

Nevertheless, he's attempting to join the field in Fort Worth this weekend and the odds are certainly not in his favor. But let's not forget that when DeChambeau is able to play, he's one of the best golfers in the world. He's won eight times on the PGA Tour in his career, most recently the 2021 Arnold Palmer Invitational. If DeChambeau feels healthy enough to give it a shot, these odds won't get any longer.

World No. 1-ranked golfer Scottie Scheffler is favored to win the tournament at +1,100.

Jason Kokrak won last year's tournament and can be found at +4,400 to win this year.

The Charles Schwab Challenge will be played from Thursday, May 26 through Sunday, May 29, 2022 at the Colonial Country Club in Fort Worth, TX.