Toronto is hoping to overcome yet another season of playoff disappointment as they enter 2021-22. But with several offseason shifts and their best players recovering from injury, what does our Maple Leafs betting preview have in store?

It’s the start of another new NHL season and that means high hopes for the Toronto Maple Leafs and their fan base. Whether those hopes are built on the backs of broken dreams depends on who you ask, but regardless of postseason success, or lack thereof, this is still a team that finished first in the North Division a season ago with 77 points in 56 games (1.375 points per game) and has five straight winning seasons since drafting Auston Matthews with the first overall pick in 2016.

Over that stretch, the Buds have recorded three 100-point seasons and are 206-120-46. However, it’s been all for naught, as Toronto has been bounced in the first round of the playoffs five straight times and is 0-7 SU in series-clinching games. It’s not easy being a Leafs fan, as the talent has exceeded the results over the last half-decade, but now that things are returning to normal pandemic-wise, is the 2021-22 season the year things fall into place for the storied franchise?

The Leafs enter the 2021-22 campaign as the No. 4 betting favorite (+1,000) to hoist the Cup behind only the Colorado Avalanche (+450), defending champions Tampa Bay Lightning (+550) and Vegas Golden Knights (+700). The +1,000 odds equate to an implied probability of 9.1 percent. These high hopes are nothing new for the Maple Leafs, but for a team that hasn’t won a playoff series since 2004, this is a tough price to recommend.

Odds to win the conference/division

The Leafs might have a better chance at cashing division-winning futures as division future bets are settled after the regular season and don't include the playoffs. This suits Toronto well, paying +205 to win the Atlantic. Sadly, Tampa is also in the division and is paying (+145) to win the Atlantic

The highest point total the Leafs have accumulated in the Auston Matthews era is 105 back in 2017-18. Last season, in a weak North Division where Toronto finished in first place, the Leafs went 35-14-7 for 77 points. Taking that 1.375 points per game and multiplying it by an 82-game season gives the Leafs 112.75 points. The Atlantic is not as strong of a division as some think, and beating up on the Senators, Red Wings, Sabres and Canadiens over three or four games each will go a long way in breaking the 106-point mark.

We're avoiding all Toronto playoff futures and instead, hitting the +584 for Toronto to finish with the league’s best record. The West is deep, but hopefully, some goalie changes in Colorado and Vegas make things difficult for last season’s top teams, while Tampa lost their entire third line from last season.

The Leafs are deep in net, at center, and on the wings and this team has shown flashes of playing elite hockey for long stretches of time. We feel the probability of winning the President’s trophy is much better than winning the Eastern Conference, which has basically the same odds and a near-equal 15 percent implied probability.

The Leafs enter the 2021-22 season with more uncertainty than seasons past but turnover is not necessarily a bad thing for a team struggling to get over the playoff hump.

Let's take a look at the Leafs' offseason moves for each position:

Gone is goalie Frederik Andersen (Carolina Hurricanes) who will be replaced by the aggregate of Jack Campbell and Petr Mrazek. Campbell was sensational last year filling in for an injured Andersen and went 17-3-2 with a 2.15 GAA and a .921 save percentage. Many will also forget that Campbell was one of the reasons the Leafs won three games in Round 1 of the playoffs a season ago, as he posted a 1.81 GAA. The knock on Campbell has always been his health but the Toronto front office addressed that need perfectly with the addition of Mrazek.

Mrazek comes over to the Blue and White having spent the last three seasons with the Carolina Hurricanes, who have been running a successful system under 2021 Coach of the Year Rod Brind’Amour. Over the last three seasons, the 29-year old goalie has a respectable 2.49 GAA with a .911 save percentage.

Campbell and Mrazek make one of the most underrated goalie tandems in the league and a 60-40 split could be in store this year with Toronto coach Sheldon Keefe trying to keep Campbell healthy. Don’t let anyone tell you differently: goaltending is a strength for this team and it has more depth than seasons past.

The Leafs lost forwards Zach Hyman (Edmonton Oilers), Alex Galchenyuk (Arizona Coyotes), Nick Foligno (Boston Bruins) and Joe Thornton (Florida Panthers). Hyman is the biggest loss of the group, as the grinder was a top-six forward and had 33 points in 43 games last season. But finding a winger to put next to Austin Matthews/Mitch Marner or John Tavares/William Nylander is an easy task and should get filled by former Bruin Nick Ritchie (two years at $5 million).

Former Blackhawk David Kampf will center either the third or fourth line, depending on where Alex Kerfoot goes. Kampf will be asked to play a more traditional shutdown role, something the Leafs have had to use Matthews for. The addition of Kampf strengthens the Leafs’ checking game while simultaneously allowing the scoring lines to do just that.

The Leafs are overflowing with potential role players to fill out their four lines. This is as deep as a bottom-six unit this franchise has had in a while with names like Ondrej Kase, Michael Bunting, Nick Robertson, Pierre Engvall and Josh Ho-Sang all making great cases to crack the lineup.

The big questions lie with Matthews and Tavares. Matthews paced the league last season with 41 goals in 52 games played, but the American forward has yet to play a preseason game due to offseason wrist surgery, though he has been practicing, which is promising.  There's hope that he'll be ready for the opener on October 13 against Montreal. Matthews missing time would be a huge hit for the Leafs, as he is ready for an MVP season if he can stay healthy.

Toronto’s No. 2 centerman is also dealing with some question marks as Tavares works his way back from a terrifying head injury he suffered in the playoffs in May. The good news is that the captain is back on the ice and hasn’t had any lingering effects ahead of the season opener and is looking to rebound after failing to hit the 20-goal mark last season. These two centermen are the most important pieces to this team, which is a little worrying considering the state of the injuries they are looking to overcome.

The Leafs will bring back most of their defensemen from a season ago except Zach Bogosian (Tampa Bay Lightning). Bogosian's departure means Rasmus Sandin will be asked to play a bigger role. The 2018  first-rounder is a gifted offensive defenseman with great vision and will likely be asked to help a struggling power play. He is an X-factor for the Leafs this year.

The Leafs lack a true No. 1 defenseman but Morgan Rielly, T.J. Brodie and Jake Muzzin are a solid top-three and Justin Holl and Travis Dermott are both valuable pieces and are developing into better players. After Sandin, there isn't much depth, and if the oft-injured Muzzin goes down, GM Kyle Dubas may be forced to upgrade via trade.

As good as Auston Matthews is, the wrist surgery has us shying away from his prop bets and any futures markets. The Leafs won’t be riding either Campbell or Mrazek enough to qualify for a Vezina, while the rookie class will play more of a supporting role unless Bunting starts the year on the wing with Tavares and Nylander.

The best value we see on the board is with the Over on Nylander’s point total. Over the last two seasons, Nylander is scoring at 0.85 points per game, which would put him at 60.35 points if he played in just 71 games. Nylander is the team’s second-best pure goal scorer and if Matthews were to miss any time this season, Nylander’s role at even strength and on the power play would increase. Nylander could flirt with the 35-40 goal mark if the Leafs’ power play figures out its struggles. 53.5 seems criminally low for an offensive-minded player about to enter his prime at 25 years old and coming into his seventh NHL season.

Where can I bet on NHL odds?

You can bet on NHL odds at most online and casino sportsbooks. Find ratings and reviews for the best hockey sportsbooks for betting on hockey futures in your area. 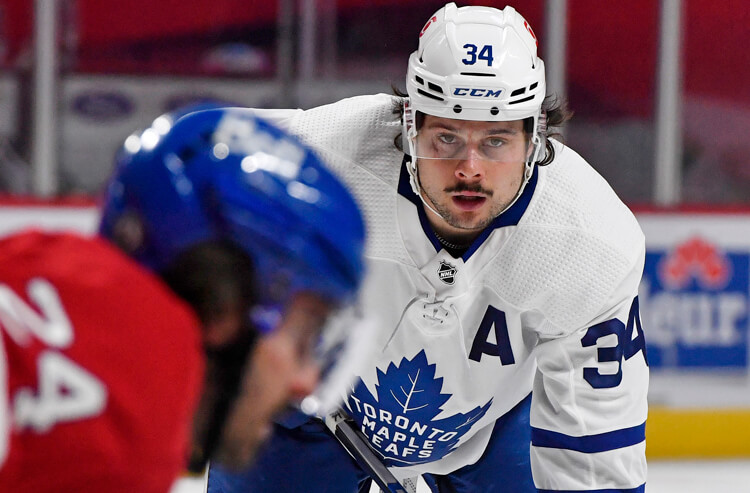 Islanders vs Blackhawks Picks and Predictions: Islanders Look To Get Back On Track
Rohit Ponnaiya | Oct 19, 2021