Rangers vs Lightning Game 6 Picks and Predictions: Can Vasilevskiy be Beaten?

The Rangers have grown skin in elimination games, but the Lightning — and, more specifically, Andrei Vasilevskiy — pose a different kind of test. See if our NHL betting picks think New York can test his stellar track record in Game 6. 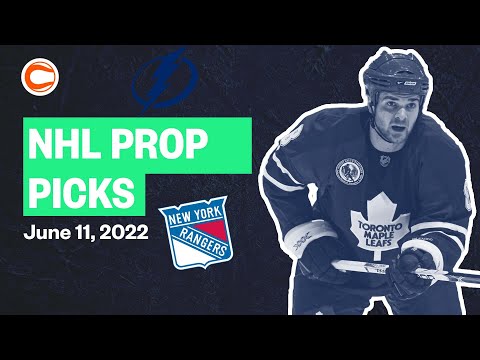 Just a week ago, the New York Rangers were leading the Eastern Conference Finals two games to none but now they face elimination heading into Game 6 on the road versus the Tampa Bay Lightning who sit as -200 ML favorites.

It hasn’t been pretty, but the Bolts have ripped off three straight wins and have stolen all the momentum in the series. Can Andrei Vasilevskiy record his seventh series-clinching shutout in eight tries, or have the Rangers built enough experience in elimination games in these playoffs that they force a Game 7? Find out in our free NHL picks and predictions for Rangers vs. Lightning.

The Lightning currently sit as -200 ML favorites, which is the shortest they have been all series. The Bolts have played two home games in this series and closed at -185 and -180 respectively.

The total is very interesting. Many books are currently as low as 5.5 -150 to the Under but have yet to move off the 5.5 to the 5. It looks as though books are trying to keep bettors away from this Under at that unappetizing price.

Rangers vs Lightning head-to-head record in the series

The Under is 5-0 in the Lightning’s last five when their opponent scores two goals or fewer in their previous game. Find more NHL betting trends for Rangers vs. Lightning.

The New York Rangers may have been playing for overtime on Thursday night during a 1-1 deadlocked game late in the third period. Tampa had yet another late push and Ondrej Palat deflected home a Mikhail Sergachev wrister to take the 2-1 lead in Game 5 with under two minutes in regulation.

It was the second time in three games that the Lightning scored the go-ahead goal late in the third period, and thanks to those back-breaking goals, the Bolts have a 3-2 series lead with a chance to move onto their third straight Stanley Cup Finals with a win tonight at home.

It’s been a rough three games for the Rangers who, have 70 shots at even strength over that stretch but have found the back of the net just once. Andrei Vasilevskiy has rebounded impressively since an uncharacteristic loss in Game 1 — the reigning Conn Smythe winner has a 1.77 GAA and a .941 save percentage over his last four. If New York can’t score on the power play tonight, the season could be over for Gerard Galant’s group.

The Rangers still own the playoff’s best power play at 31.5% but the Rags have become too reliant on the extra man to support their offense. Over the last two series, the Rangers have scored 33 goals, with 33% of those coming with the man advantage. Making things worse for tonight’s visitors is that John Cooper and the Bolts have adjusted and have given away just three power-play opportunities over the last two games.

We doubt many infractions will be called tonight, and with New York’s lack of ability to create solid scoring chances at even strength, it’s hard to back the visitors here.

Tampa is 6-1 straight up at Amelia Arena this postseason and is holding opponents to just 2.14 goals against. The Lightning took both games at home already in this series by a combined score of 7-3 and haven’t lost at home since the first round.

With so much playoff experience over the last four seasons, the Lightning know one thing: how not to lose. This is a patient team that will limit quality chances, rely on Vasilevskiy, and capitalize on their opponents’ mistakes. It’s not the most exciting hockey to watch, but all four Tampa lines have a role, the defense is elite and it has enough firepower (even without Brayden Point) to change the score.

The Bolts have won the expected goal battle in all five games in the series while the Rangers have been held to under 2.00 xgoals in four straight games at five-on-five. Tampa has 183 scoring chances compared to 137 for New York since Game 1 and has a plus-37 high-danger chance differential in the series. That includes a dominant performance in Game 5 where Tampa had 18 high-danger chances compared to New York’s five.

This is going to be a timid game with each club not wanting to make the first big mistake, and although Igor Shesterkin might be one of the best goalies in the world, he isn’t the best. Vasilevskiy has recorded an incredible six shutouts over his last seven series-clinching games and with New York squeezing the stick at 5-on-5, we like the Bolts to win this one in regulation in another tight game.

The books are also adjusting the line slightly on the home side, as the Bolts closed as -185 and -180 home favorites in Games 3 and 4 but are currently sitting at -200 as of Saturday morning.

The Under has hit in four straight games and the books are seemingly trying to keep bettors away from this total entirely. Most books are hanging Under 5.5 as short as -150 as of Saturday morning but some places (BetMGM) have moved to the 5.

The series' offense has dried up after a 6-2 New York win in the opener, and we like it to stay that way tonight.

In the games he has won, though, it’s been insane. Of his last seven series-winning games, he has a .976 SV% and six total shutouts. These are the types of stories that could certainly start percolating inside the heads of Rangers players tonight.

Beating Vasilevskiy has proven difficult for the Rangers, but the Tampa offense hasn’t looked impressive either.

With Brayden Point possibly missing his 11th straight game, Cooper has had to make plenty of line adjustments, and right now, the emphasis is on defense, and the Bolts aren’t driving the offensive play.

The Lightning have just 12 non-empty-net goals through five games, but that's a style this team is willing to play, as they know they can win these 3-1 games.

Penalties have been few and far between over the last two games and with an elimination game, it would be hard to imagine that anything but a blatant infraction gets called today. This game should be played heavily at 5-on-5 and so far in the series, neither team has shown much in the production department.

New York is playing with banged-up skaters in Ryan Strome and Filip Chytil, while Tampa is likely dealing with their own injuries as well.

If this isn’t a low-scoring affair, we’d be stunned. With Vasilevskiy and Shesterkin manning the pipes and so much on the line, this timid Game 6 has us reaching for one of the few Under 5s on the board with pushing on the 5 a real possibility.

Playing player props in this game is a tough ride, as points and shots will be few and far between. So in these instances, we’d rather play a low-risk/high-reward play and take a chance as some big plus money — and there's only one play that we have in mind.

Vasilevskiy has six shutouts over his last seven series-clinching wins. The markets are very aware of this, but we can still get Vaz at +880 to record the shutout.

There are plenty of reasons to get excited about this play.

The Lightning will look to close out the Rangers in Game 6 of the Eastern Conference Final tonight (8 ET, ESPN).

First off, the Rangers have been horrific offensively and generated just five high-danger chances in Game 5 at home. They’ve also scored just one even-strength goal in nearly the last 200 minutes. This is a very good spot to target this New York offense to lay a dud.

Secondly, Vasilevskiy is elite at home. He has a 1.79 GAA over his last 19 home playoff games including five shutouts and a 15-4 SU record. He’s dropped just one game on home ice in these playoffs.

There's a lot of talk about the Tampa goalie right now, and the majority of it is justified. When he's locked in like he is now, he's the best goaltender in the world and that’s bad news for a Rangers team that is already struggling to score.

Pick: Vasilevskiy to record a shutout (+880 at FanDuel) 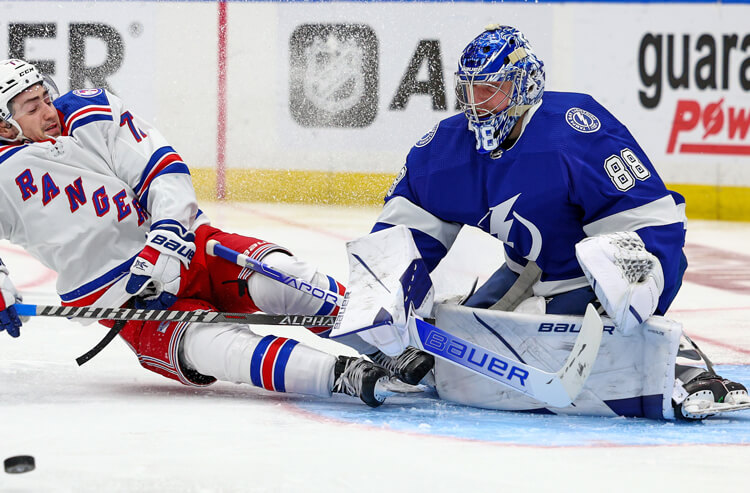 Rangers vs Lightning Game 6 Picks and Predictions: Can Vasilevskiy be Beaten?
Provided by