New York was outplayed in Game 1, yet only lost by one goal... albeit a crushing triple-OT defeat. However, our NHL betting picks like the Rangers to raise their level of play — and in facing a third-string goalie should even their best-of-seven series. 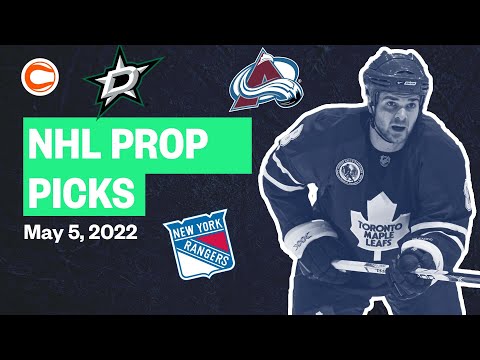 Tuesday saw the Pittsburgh Penguins, with a third-string goalie entering in the middle of the game, topple the New York Rangers in triple overtime in what was instantly an all-timer for Game 1s.

So what are we going to see for an encore in tonight's Game 2?

After being slim NHL betting home favorites in Game 1, the Blueshirts are larger chalk in a must-win Game 2 — presumably, because Pittsburgh's third-stringer will play the entirety of Thursday's game.

We've got more about that — and our best free NHL picks and predictions — in our Penguins vs. Rangers betting preview for May 5.

The Rangers closed Game 1 as a -135 favorite with Casey DeSmith starting for the Pens. New York opened at -137 for tonight's game but with Louis Domingue starting for Pittsburgh in Game 2, the Rangers have seen their odds jump to the -160 range (as of 11:45 a.m. ET), with the Pens available anywhere from +130 to +140.

The total opened at a flat 6, but has since dropped down to 5.5, shaded to the Over.

A) Opt-in and place a pre-game Same-Game parlay at DraftKings — if your bet loses you'll get a free bet (up to $10)! Opt-in Now

B) Chris Kreider and Jake Guentzel to each score a goal BOOSTED to +550 at Caesars! Claim Now

The Over is 4-1 in the Rangers' last five games as a favorite. Find more NHL betting trends for Penguins vs. Rangers.

Penguins vs Rangers picks and predictions

Well, almost everything we expected to happen in Game 1... went the opposite direction.

The Rangers' improved 5-on-5 play and clamp-down defense were non-existent and the power play only got one opportunity all night — and the result was that after a dominant opening 20 minutes, New York was outplayed for the remaining 85:58 en route to a crushing 4-3 triple-overtime loss.

Making the loss even worse was that the Rangers also got nearly a full period against Louis Domingue, who entered midway through double overtime after Casey DeSmith left due to cramps, but could not get a goal past a third-string goalie that was sitting on the bench for 4.5 hours and was fueled by spicy pork and broccoli.

We did say almost everything went wrong, however, because the one shining star (as he has been all season) was goaltender Igor Shesterkin, who made an utterly ridiculous 79 saves — the second-most ever in a single playoff game — as the Penguins outshot New York 83-68, out-chanced them 125 to 94, and Moneypuck had Pittsburgh winning that game 89.6% of the time (based on 1,000 simulations.)

Other than an energetic first period, it was an otherwise atrocious game for New York:

• Pittsburgh had 8.99 expected goals in Game 1, compared to New York's 3.89 (per Natural Stat Trick).
• Ryan Strome was the only forward with an expected goals percentage above 50% — lower than 15 of the 18 Penguins skaters
• Adam Fox was the team's most dangerous offensive weapon, but he — like everyone in blue on Tuesday — simply could not stop Pittsburgh's top line of Sidney Crosby/Jake Guentzel/Bryan Rust.

The Pens' trio manhandled any and all Rangers that went against them, with 3.02 expected goals for and just 0.55 expected goals against, while generating 44 shot attempts (compared to just 16 against) and combining for seven points.

The bright side for the Rangers in all this? First, they likely can't play much worse than they did for the majority of Game 1, and second, they will get a whole game against Domingue, who is expected to start tonight.

The journeyman goalie did stop all 17 Rangers shots he faced, but none of them were truly dangerous — the entirety of the New York roster looked exhausted by the time Domingue entered in double OT, and the team could not muster anything to challenge an ice-cold goalie.

However, the fact of the matter is that Domingue, who has played all of four NHL games over the last three seasons, has a career 3.00 GAA and a .906 SV% — if New York can't exploit that matchup, it has serious problems.

The Crosby line is still a problem but considering how badly the Rangers were outplayed, they did just lose by one goal. We're expecting some regression to the mean, which should see New York be more competitive in this game. Combine that with Shesterkin continuing to do his thing, Domingue playing like a third-stringer, and the general desperation of not wanting to go down 0-2 heading into two road games, and we're leaning with the Blueshirts evening up the series tonight.

Again: Shesterkin was outstanding Tuesday, with nearly five goals saved above expected, but he still did give up three goals in regulation alone and after playing nearly 5.5 periods of hockey, there's no way he's not going to be feeling the effects somewhat.

Having just one day of recovery after grinding through nearly two games of high-intensity, high-leverage hockey is simply not enough. We'd expect some tired legs to show up much sooner than expected, which can lead to sloppy giveaways, turnovers, and penalties — all of which favors the offense.

Shesterkin may have looked like a robot in Game 1, but fatigue gets the best of us all at some point, while Domingue will undoubtedly face some much tougher shots from New York.

The Over has cashed in four of the last five head-to-head games at Madison Square Garden, so we'll lean in that direction again for Game 2.

Not only did the Crosby/Guentzel/Rust trio generate a lot of shot chances in Game 1, but they also managed to get plenty of pucks on net that required Shesterkin to make a save.

That also doesn't factor in the power-play time and the fact that top lines do tend to play more in the playoffs, so these per-game rates will likely project higher based on the Game 1 output.

Now, above we mentioned that the Rangers should make this a little more competitive tonight, which means this trio won't do quite as much damage — but Guentzel has 3+ sog in eight of his last nine games, Crosby 3+ in 13 of his last 16, and Rust a little more feast or famine, with almost as many games with 5+ shots (four) as games with one or zero shots (five) over the last month.

Looking at who has the best shot prop value of the trio tonight, Rust has the best price (2.5 at -118) but his game-to-game variance scares us off, while most books are offering Guentzel either at 3.5 shots or 2.6 with heavy juice (-167)... leaving us to look at Sid the Kid.

His sog total is just 2.5, priced at a reasonable -138, and considering he looked in vintage form in Game 1, we'll ride with the future Hall-of-Famer to constantly be testing Shesterkin again tonight. 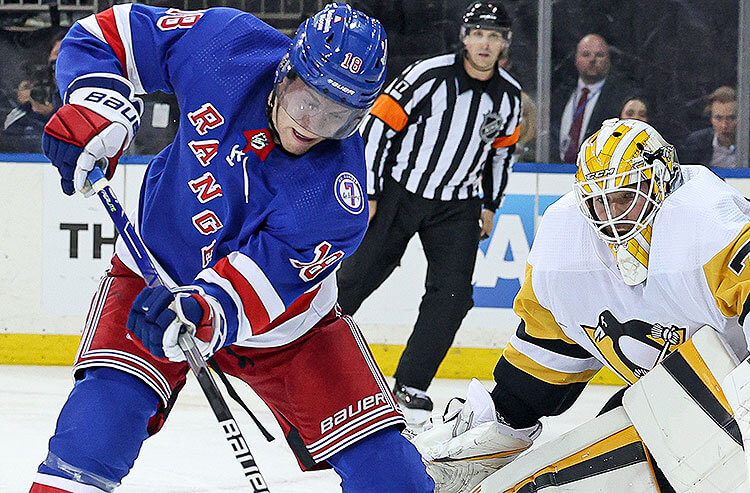