Baylor was dealt an annoying loss last week and now gets to take its frustrations out on clearly-worse Texas State. The spread is huge but our college football picks think a properly-motivated Bears side can tackle it.

Following a week that saw a plethora of upsets, 17th-ranked Baylor hopes to avoid one of their own on Saturday as they host the Texas State Bobcats. The Bears return home on the heels of a painful road defeat against BYU, which the lower-ranked Cougars won in double overtime despite missing two of their top receivers.

Texas State is a heavy underdog in this game, but it’s coming off a strong showing last week and will play with nothing to lose. Can it capture some of the underdog magic that we saw in Week 2, or will Baylor cover the hefty spread? Find out in our Texas State vs Baylor college football picks and predictions for Saturday, September 17.

Last week’s defeat for Baylor was a frustrating one, as the Bears struggled to get anything going on offense. While they didn’t turn the ball over, they found it tough sledding against BYU’s defensive unit, throwing for only 137 yards on 18 completions and gaining just 2.9 yards per carry on 52 rushing attempts. Despite converting half of their 18 third-down attempts, they were forced to punt on six of their nine full drives, and they were consistently the author of their own demise, as they were flagged 14 times for 117 yards.

Now the Bears return home to square off against a Texas State team that hasn’t been terrible against the run. In their opening weekend defeat to Nevada, the Wolf Pack ran for 134 yards on 43 carries against the Bobcats, who actually out-gained Nevada in total offense. However, the Wolfpack had multiple short fields thanks to four turnovers. They also did the majority of their damage through the air, as Texas State lost 11 yards on 25 carries in part due to the four sacks they allowed.

In their win last weekend over FIU, the Bobcats were able to run for more than 220 yards as they rolled to an easy win, and scored touchdowns of 67, 52, and 25 yards. But the Baylor defense they’re facing held BYU’s duo of Christopher Brooks and Jaren Hall to just 59 yards on 23 carries. Texas State showed against Nevada that if they’re unable to run a balanced offense, quarterback Layne Hatcher can be quite turnover-prone. They also have to cut down on their penalty issues, as they’ve committed 18 so far this season.

Texas State can put up some fight — much like they did in a 29-20 defeat last year to open Baylor’s season — and the spread of nearly 30 is quite a bit to lay. But, I believe it’s your Best Bet in a game that has limited betting options. Baylor was dominant against Albany in its home opener, as it ran for 6.3 yards per carry en route to 259 yards rushing and 573 yards of total offense. Calvin Hill ran for 195 yards last week — the fourth-most in school history since joining FBS — but repeating a performance even half that good will be highly unlikely against Baylor’s run defense.

BYU’s struggles to move the ball against Baylor last week offer a preview of this game, and while Texas State has some solid players, they will be in a tough spot once Baylor shuts down the run game. If the Bears get out to a solid start offensively behind their stable of running backs, it will force Hatcher — who struggles with accuracy and turnovers, completing fewer than 60% of his throws — to make plays. That will be their downfall, as Baylor capitalizes on the mistakes and wins going away.

A) New users at BetMGM can bet $10 and get $200 in free bets if any college team scores a touchdown! Sign Up Now

While Texas State has a chance to cover the spread, winning outright would be one of the biggest upsets of the season. The Bobcats are such underdogs that multiple books aren’t even offering a moneyline, and multiple books have Baylor at prohibitive prices of at least -10,000 for the win.

Although the lines have actually come down a bit from where they opened, Baylor is expected to win easily, and rightly so. Baylor has won both meetings between these two schools — both by single digits, interestingly enough — and the Bobcats have lost 14 of their last 20 games. They’ve also won just three times in their last 19 on the road, and have lost nine straight against Big 12 teams.

All that said, the moneyline offers no value in this game, even when put into a parlay, and should likely be avoided unless you are taking a flier on Texas State continuing the “Fun Belt” antics of a week ago. Baylor should easily push their home winning streak to nine games with a win.

The total of 52.5 points for this game puts many in a tricky spot. The Bears will want to run the ball and likely control the game, and if they are leading by a lot in the second half they’ll likely pull their starters and see out the game. While they put 69 on Albany in a game that saw 79 scored, Texas State will be more of a challenge, and even its double overtime game last week saw just 46 points scored.

The number is also right where Texas State’s first two games have ended up. Their win last week over FIU saw 53 points put on the board, while the total landed at 52 in their loss to Nevada. Perhaps that’s why the total dipped slightly after opening, but has returned pretty much to where it started at nearly every book.

Baylor’s last seven games have seen the total go Under six times, while the Under has hit in six of Texas State’s last eight games. This line seems to be pretty spot-on and I don’t expect much movement as we get closer to kickoff, and an argument could be made for it going either way.

The Bears have covered the spread in seven of their last eight games at home. Find more NCAA betting trends for Texas State vs. Baylor. 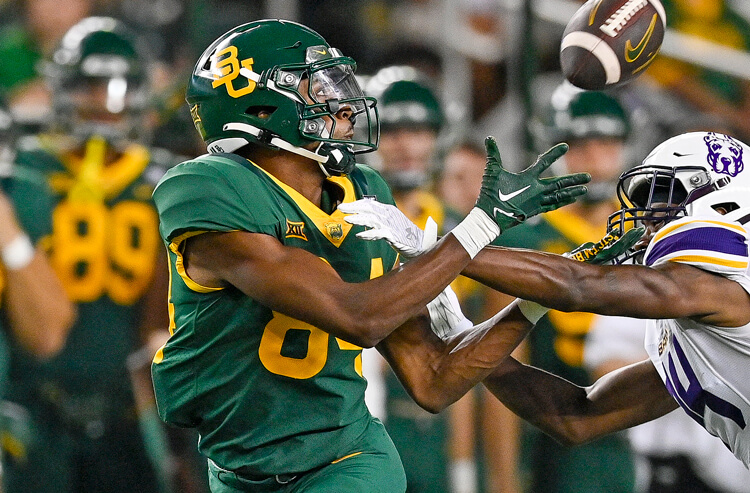