The Eagles are on a brutal losing streak against ranked competition, but given the nebulous nature of the bottom of the rankings right now, this could be a great shot to snap that slide. Find out why with our Week 7 NC State vs Boston College picks.

The Boston College Eagles have not beaten a ranked team since 2014, a streak of 21 straight losses that the Eagles will hope to end against the No. 22 North Carolina State Wolfpack in primetime on Saturday.

This nighttime meeting in Chestnut Hill could be a decent chance for the Eagles to shirk that streak to ranked opponents, even if they are without their star starting quarterback and have been simply trying to get by since Phil Jurkovec’s wrist injury a month ago.

Here are our free college football picks and predictions for North Carolina State at Boston College on October 16, with kickoff set for 7:30 ET.

Perhaps in undue deference to the home-field advantage at Alumni Stadium, this opened as low as a 1.5- or 2.0-point edge toward North Carolina State on Sunday. By Monday, the spread had reached a full field goal, and it crossed over to -3.5 toward the end of the week before dropping back to that full field goal across the board early Friday.

The total opened as low as 51.0 before gradually moving upward early in the week, cresting at 53.0 and 53.5 on Tuesday before falling back down to 51.5 on Wednesday.

The two division rivals meet annually, with a pandemic exception, and the Under has cashed in five of their last six meetings. Find more NCAA betting trends for NC State vs. Boston College.

Ranked opponents might have a long stretch of success against the Eagles, but in Jeff Hafley’s year-plus as their head coach, Boston College has come within a touchdown of three of their five ranked foes, including just two weeks ago against then-somehow-still-No. 25 Clemson.

At some point, the Eagles need to turn that “so close” feeling into a cigar.

North Carolina State has not exactly been dominant this season. Remove its blowouts of South Florida and FCS-level Furman, and the Wolfpack have been outscored by a point despite going 2-1 against comparable competition.

Boston College may not have a litany of stellar wins itself — a 41-34 roller-coaster victory against Missouri carries only so much weight, no matter how much Hafley wanted to hype up the victory over an SEC opponent afterward — but at some point, the variance should strike back against NC State. On the road, against a decent defense supporting a scrappy quarterback, that moment could come for the Wolfpack, much to the Eagles’ delight.

Boston College does not have the firepower, particularly without Jurkovec (no offense intended toward senior Dennis Grosel), to win in a shootout, so predicting the Under here fits hand-in-hand with expecting the Eagles to cover.

Grosel could disparagingly be called a “game manager,” his 157.6 passing yards per game somewhat skewed by a cameo in the season opener, but even an accurate portrayal of Grosel does not set up Boston College to score with ease. While Grosel threw for 311 yards at Clemson two weeks ago, he never found the end zone and instead threw two interceptions. His 57.5 percent completion rate was nothing astounding.

Similarly, NC State quarterback Devin Leary can misleadingly be held up as a star. His 12 touchdowns to two interceptions ratio is excellent, but very little of that comes from explosive plays. The Wolfpack offense chips away at a defense. In the three games against decent competition, Leary averaged 6.1 yards per attempt.

Hafley is too good a defensive mind to let that middling offensive approach beat him. 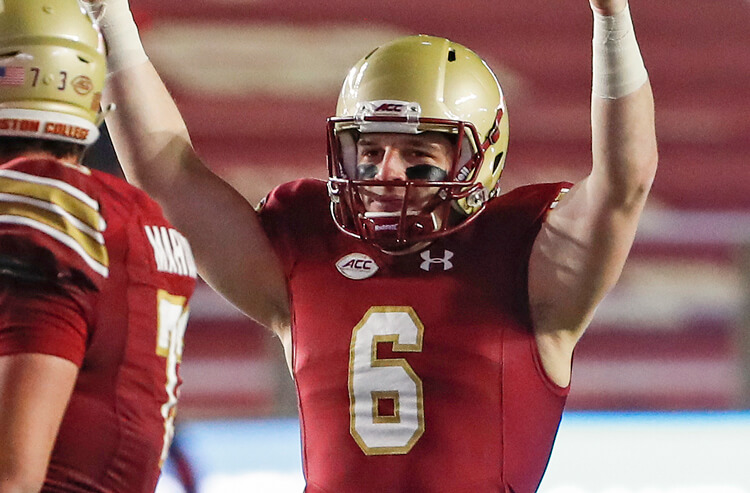 USC vs California Picks and Predictions: Pac-12 After Dark Finale
JD Yonke | Dec 3, 2021
About Us
Contact Us
Careers
Our Team
Brand
Testimonials