Michigan vs Purdue Odds, Picks and Predictions: Maize and Blue Bash In the Big Ten Championship

The Wolverines went into Columbus last week and scored at will against OSU. Now facing a lesser Boilermakers defense, our college football picks for the Big Ten Championship between Michigan and Purdue expect UM's offense to stay hot. 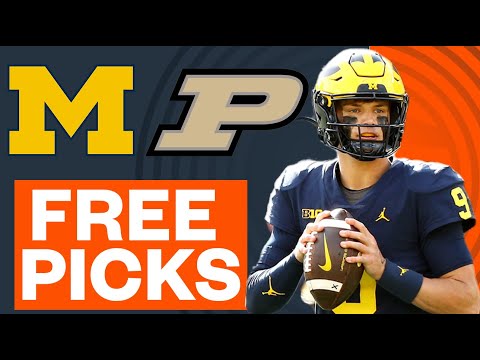 The Michigan Wolverines will try to defend their conference title and qualify for the College Football Playoff in back-to-back seasons when they take on the Purdue Boilermakers in the Big Ten Championship Game tonight.

The Wolverines come into this matchup undefeated after a massive victory over hated rival Ohio State in Columbus last week. The Boilermakers, meanwhile, were the last man standing in what was a less-than-stellar Big Ten West division.

Can the Boilermakers keep this game close and cover the 17-point spread? Or will the Wolverines and their powerful offense overwhelm another Big Ten opponent?

I break it all down and bring you my best bet in college football picks and predictions for Purdue vs. Michigan.

Michigan vs Purdue picks and predictions

Everyone knew Michigan had a chance in this year’s edition of the Big Game, but not many outside of Ann Arbor expected that sort of destruction of Ohio State. The Wolverines throttled the Buckeyes 45-23 in their own house, even with top back Blake Corum limited to just a few plays, and they did that in a few ways.

Ohio State had no answer for the Wolverines' monstrous offensive line and gashed a solid Buckeyes defense for over seven yards per carry. Maybe the most shocking part of all this was the play of quarterback J.J. McCarthy.

One of the reasons I liked Ohio State last week was that I didn’t think McCarthy had the ability to take advantage of the Buckeyes’ biggest weakness — the deep ball — but boy did he prove me, and a lot of others, wrong.

McCarthy hit three massive touchdown passes in the win, all going for at least 45 yards. He ended with game 263 passing yards, three TDs, and no picks. If he can continue that level of play, the Michigan offense will be a lot for Purdue to handle.

Speaking of Purdue, the Boilermakers won three games in a row down the stretch to clinch their spot in the conference title game. Unfortunately, they didn’t look great in doing so, against fairly weak competition. Heck, they needed a second-half comeback to be lowly Indiana last week.

The Boilermakers' defense has been run on recently, giving up nearly 170 yards per game over their last five games. Purdue also has a problem with giving up the big plays. The team ranks 100th in the country in plays allowed over 40+ yards. To make those numbers look worse, Purdue hasn’t played a good offense since Maryland back on Oct. 8.

Basically, if McCarthy plays as he did against Ohio State, Purdue won’t have much of a chance to slow down this Michigan offense, even if Corum doesn’t suit up.

With the Wolverines going for 45 against the Buckeyes and putting up 42 in last year’s Big Ten title game against Iowa, I really like them to eclipse their team total this year.

The spread for the Big Ten title game hit the board with Michigan as a 16-point favorite for the matchup at Lucas Oil Stadium. Since then, the number has bounced around between 16.5 and 17. I would lean toward the Wolverines at 16.5, but the only thing that gives me pause is the play of McCarthy.

Prior to last week’s game, many were wondering if Jim Harbaugh made the right choice to make the switch to him from last year’s starter Cade McNamara (who has now entered the transfer portal). He has completed just 52% of his passes over the last five games.

The other thing here is motivation. The way the college football season has played out, even with a loss in the Big Ten title game, Michigan is likely to advance to the College Football Playoff for the second straight season. So, if the Wolverines build a nice lead, they could start resting their best players with their sights set on being healthy for the playoff.

If Purdue, who has a solid offense (more on that in a moment), was somehow able to pull off the upset, it would earn itself a bid in the Rose Bowl. So, I’ll stay away from the side here.

The total opened at 50.5 and has been bet up just slightly, sitting at 51.5 as of Friday afternoon. You already know I like Michigan to do some scoring in this one, meaning Purdue would have to only score a couple of times to send this one Over the full-game total as well. I think it can do that.

Purdue’s Aidan O’Connell is a very good quarterback. O’Connell has thrown for 3,111 yards while completing 63.8% of his passes with 22 touchdowns and 11 interceptions. The Boilermakers also get solid balance thanks to running back Devin Mockobee, who has rushed for 849 yards at a clip of 5.1 yards per carry.

This offense really gets rolling when O’Connell is slinging it, and the conditions will be perfect for that as the Big Ten Championship takes place indoors at Lucas Oil Stadium.

Michigan’s defense is great but a balanced, motivated and well-coached Purdue team should find the end zone a couple of times in this matchup. I’d lean toward the Over here.

The Over is 7-1 in Purdue's last eight games vs. a team with a winning record and 13-4 in Michigan's last 17 neutral site games. Find more NCAA betting trends for Michigan vs. Purdue.

Michigan vs Purdue Odds, Picks and Predictions: Maize and Blue Bash In the Big Ten Championship
Provided by