Depending on who you ask, the TCU Horned Frogs are either underrated or overrated. Regardless, a win over Kansas State could punch their ticket to the College Football Playoff. Our betting picks sort through the Frogs' chances at staying unbeaten. 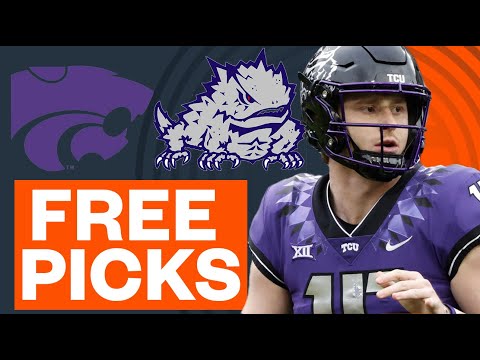 The Big 12 Championship is on the line at At&T Stadium as Kansas State (9-3) hopes for a different result in a rematch against undefeated TCU (12-0).

When Sonny Dykes took the TCU job this offseason, making the playoffs was not the expectation. Regardless, Dykes has the Horned Frogs with a perfect record and needs just one more win to make the College Football Playoff.

Will TCU keep the magical season alive with a Big 12 Championship and thereby a CFP appearance?

Check out our college football picks and predictions for the Kansas State Wildcats and TCU Horned Frogs to find out.

The Big 12 Championship will be a conundrum for bettors at first glance as both teams have been very profitable against the spread. Kansas State is 8-3-1 ATS — including three straight covers — while TCU is 9-2-1 ATS, including a cover in five of its last six games.

All of the pressure is on TCU in this spot. Despite the 12-0 record, it’s no sure thing that the CFP committee would elect the Horned Frogs among the top four teams in the nation if they were to lose in the Big 12 Championship game. There’s a one-loss Ohio State team waiting in the wings at No. 5, but TCU controls its destiny in the sense that a win puts it in the fold.

How have the Frogs amassed a surprising 12-0 record? It hasn’t always been pretty, but they’ve come out on top every time regardless. Dykes’ offense has been an instant hit in Fort Worth as the Frogs are averaging 41.3 PPG (4th) and 473.3 total yards (16th) on a robust 6.9 yards per play.

They’ve gotten it done both on the ground and in the air, as fourth-year starter Max Duggan has racked up 3,364 total yards and 34 touchdowns while importantly tossing just three interceptions, and running back Kendre Miller will be a hot commodity in the NFL Draft after posting 1,375 scrimmage yards and 16 touchdowns.

Defensively, the Frogs aren’t elite from a talent perspective and that’s shown in the box scores, ranking 53rd in scoring defense (24.5 PPG) and 74th in total defense (383). Still, defensive coordinator Joe Gillespie has done a terrific job in Fort Worth and the defense has improved as the year has gone on, allowing more than 30 points just once in the last six games.

TCU has found multiple ways to win and it's evident that this is a well-rounded team that can beat you in many ways. The Horned Frogs have had their fair share of close calls along the way, and it’s possible Saturday will be yet another one.

That being said, this team has been disrespected in the betting market all year and that appears to be the case yet again in the Big 12 Championship as they are just a -2.5 favorite despite winning the first meeting by 10 points. Give us the Frogs to survive and advance yet again and get a well-deserved Big 12 Championship in Year 1 under Sonny Dykes.

After opening at -1.5, TCU has moved to -2.5 at all locations at the time of this writing.

Here’s what the advanced numbers say about TCU. The Horned Frogs are great offensively, ranking 16th in expected points added (garbage time excluded) per play thanks primarily to their propensity to find big plays, ranking third in explosiveness. The defensive side isn’t as pretty, as they rank 53rd in EPA per play, 35th in success rate, and 105th in explosiveness.

Kansas State is above-average on both sides of the ball, checking in at 29th in EPA per play on offense and 28th on defense. Deuce Vaughn (1,643 scrimmage yards, 10 touchdowns) is the star of the show offensively and the Wildcats rank 30th in EPA per rush and 13th in rushing explosiveness.

Felix Anudike-Uzomah is one of the best college football players most casual fans have never heard of, leading the defensive front with 10 tackles for losses and 7.5 sacks. However, the secondary is a bit thin after safeties Kobe Savage and Cincere Mason were lost to the year due to injury.

When these teams played back on October 22, TCU grabbed a 38-28 win at home. In typical fashion, things weren’t always easy. Kansas State grabbed a 28-10 lead with 8:09 remaining in the second quarter but failed to score again the rest of the game, allowing the Frogs to rip off 28 unanswered points en route to victory. Wildcats starting quarterback Adrian Martinez was lost to injury after attempting only two passes, and backup Will Howard played most of the game before also leaving injured.

While it seemed like bad injury luck doomed the Wildcats in that matchup, that narrative doesn’t hold as much weight in hindsight. Howard has taken over the starting quarterback role since that game and has performed admirably, arguably better than Martinez had to start the year. Also, TCU dominated the box score in that game, winning the yardage battle 495 to 390 and the first down battle 26 to 15.

After opening at 60.5, the total has moved up at least a point. Currently, the Over/Under is set between 61.5 and 62.5 depending on the book.

All eyes will be on potential first-round NFL Draft pick Quentin Johnston, who has been dealing with an ankle injury for the past month. He played through it for a handful of games but was rested in last week’s easy demolition of Iowa State. Dykes said he’s “looked like his old self at practice” and “it’s the best he’s looked in maybe a month," so it seems like all systems are full go for Saturday.

Kansas State will hope that a healthy offense finds more than the measly 15 first downs mustered in the first matchup. Howard has been a revelation at quarterback, averaging 9.3 yards per attempt while tossing 13 touchdowns to just two interceptions. Coach Chris Klieman stated that Martinez might return from injury this week, but it seems evident that Howard is this team’s starting quarterback — which has been a good thing.

Vaughn is one of the best skill players in all of college football, while receivers Malik Knowles, Phillip Brooks, and Kade Warner, along with tight end Ben Sinnott, all have over 365 receiving yards and have multiple touchdowns.

The Horned Frogs are 5-1 ATS in their last six games. Find more NCAA betting trends for Kansas State vs. TCU.