Kansas State vs Oklahoma Odds, Picks and Predictions: No Fireworks To Conclude Rivalry

Two teams with stout defenses that won't turn the ball over easily face off Saturday, and our college football picks like an Under as a result. See why Kansas State and Oklahoma will make life tough on each other as a storied rivalry draws to a close.

A rivalry that dates all the way back to 1914 will be renewed for the 102nd and possibly final time when the Kansas State Wildcats travel to Norman to face the Oklahoma Sooners on Saturday night.

Both teams are led by experienced transfer quarterbacks and starting their Big 12 schedule with this matchup. Kansas State is coming off an upset loss to Tulane at home, while Oklahoma has rolled all three of their opponents. Will the Wildcats be able to pull off another upset over a Top-10 ranked Sooners team?

Find out in our free college football picks and predictions for Kansas State vs. Oklahoma on Saturday, September 24.

The history between these two teams is very storied and will be missed when Oklahoma heads off to the SEC. Kansas State has won two of the last three matchups, despite the Sooners being ranked in the Top 10 and the Wildcats being unranked in all three games. They also have a combined total of 76.7 points per game in those three matchups.

However, this year’s versions of these two teams are very different. Oklahoma replaced head coach Lincoln Riley, who left for USC, with former Clemson defensive coordinator Brent Venables. He’s quickly changed the defensive quality of the Sooners, as they rank 14th in points per game allowed and 28th in yards allowed.

Venables has brought an aggressive defensive scheme to Oklahoma, and they’ve gotten after opposing quarterbacks. They’ve already recorded 13 sacks, three interceptions, two fumbles, and a safety through three games. Meanwhile, the Kansas State offensive line is still learning to gel after losing three starters from last season, and lost new starter Taylor Poitier for the season after the first game.

The Wildcats allowed four sacks to a much lesser opponent in South Dakota. Also, returning All-American running back Deuce Vaughn has struggled to get enough openings to put up his usual numbers. He’s averaging 1.2 fewer yards per play from scrimmage than he did last year. Dual-threat transfer quarterback Adrian Martinez has not turned the ball over, but also has lacked big play ability. He‘s averaging just 4.6 yards per attempt through the air and 3.8 yards per rush.

Both teams are good at not turning the ball over and have strong shut-down defenses. This just screams Under to me. There will likely be a lot of special teams play with several punts and field goal attempts. In the six combined games these two teams have played this season, the Under is a flawless 6-0.

Oklahoma has completely dominated their three opponents thus far, winning by an average of 32.3 points per game. However, those three opponents were quite sub-par, as Oklahoma’s SOS currently ranks 109th in the country. Kansas State is a much tougher opponent on both sides of the ball.

The Wildcats defense will get a big test though on Saturday with an Oklahoma offense that ranks 20th in points per game, 13th in total yards per game, and 12th in rushing yards per game. New quarterback Dillon Gabriel, who transferred from UCF, has 759 passing yards and seven touchdowns to go along with 65 rushing yards and two ground TDs. Leading rusher Eric Gray is averaging a robust 7.7 yards per carry thus far, providing a dynamic attack.

This is a tough spread because Oklahoma could easily dominate this game the same way they have their lesser opponents. However, I feel like the Kansas State defense will be able to hold their own and they can control time of possession. Give me the Wildcats against the spread, but I’m not as confident as I am in the Under.

I mentioned how special teams will be important in this game, with both defenses not allowing many touchdowns and both offenses not turning the ball over often. Well, that could be an issue for Kansas

State with their poor kicking. They have already missed two extra points and two of their five field goal attempts.

Even if Kansas State moves the ball into Oklahoma territory, it won’t feel confident racking up field goals. Meanwhile, the Oklahoma defense has only allowed three touchdowns on the season.

The Kansas State defense may also be getting Shawn Robinson back, who is currently listed as questionable, but has yet to play this season. He could be an impact player that will help the Under if he sees the field.

The Under is 5-1 in Kansas State’s last six games against conference opponents. Find more NCAA betting trends for Kansas State vs. Oklahoma. 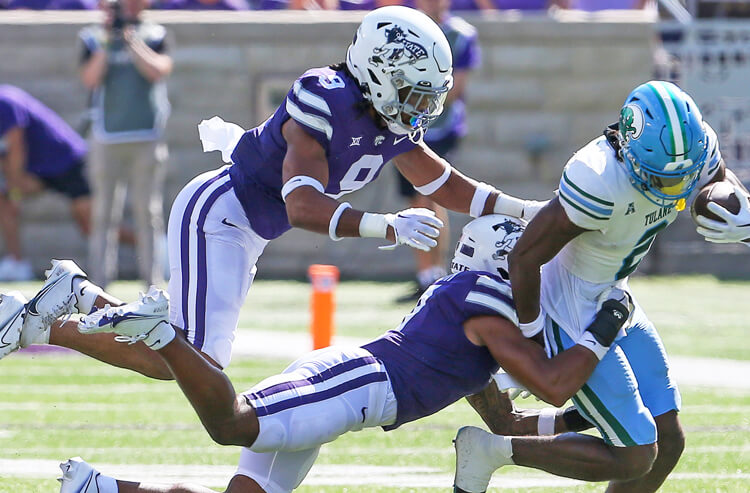 Kansas State vs Oklahoma Odds, Picks and Predictions: No Fireworks To Conclude Rivalry
Provided by