Houston vs Tulane Picks and Predictions: Cougars Ride the Wave

The Green Wave have been a disappointment by and large this season, and face a pretty brutal matchup against the Cougars. Find out if they can dig deep and navigate this game with our Houston vs Tulane picks.

The Tulane Green Wave will be hoping to snap a three-game losing streak when they host the Houston Cougars at Yulman Stadium in New Orleans, Louisiana at 7:30 p.m. ET on Thursday, October 7.

After nearly upsetting the Oklahoma Sooners in the season opener, this Tulane team has been very disappointing. Will the Green Wave get up for a home game against a good Cougars team? Find out in our Houston vs. Tulane picks and predictions.

Houston was a 4.5-point favorite when this game first came available, and the team now finds itself favored by between 5.5 and 6 points. Meanwhile, the total has moved pretty significantly, as it has dropped from 62 to 59.5 at most books.

Under is 4-1 in Tulane’s last five games as a home underdog.  Find more NCAA betting trends for Houston vs. Tulane.

Last week, Houston made a statement in a 45-10 victory over the Tulsa Golden Hurricane. The Cougars were oddly 3-point underdogs in that game, and Dana Holgorsen’s offense finally showed its explosiveness in a game against strong competition. The Cougars struggled in a 38-21 loss to the Texas Tech Red Raiders in the season opener, but they had 405 total yards against Tulsa. The Cougars also continued to play shutdown defense, as they held the Golden Hurricane to just 31 yards rushing.

Houston’s defense is a huge part of the reason that the team should be able to comfortably take care of Tulane in this one. The Cougars are 10th in the nation in scoring defense, as they’re allowing just 15.0 points per game this season. Houston is also fifth in the country in passing defense, giving up just 144.4 passing yards per game. That’s especially important when factoring in how much the Green Wave rely on Michael Pratt’s arm.

Pratt has attempted 85 passes over the last two weeks and he’s going to be in for a rough night against an aggressive Cougars secondary if Tulane can’t get the running game going — which won’t be easy considering the Cougars also boast an above-average rushing defense. Not only does Houston have six interceptions on the year, but the team also has a collection of heavy-hitting defensive backs. The Cougars aren’t likely to give up big plays and they get to the ball quickly on screen passes.

Offensively, running back Alton McCaskill is a player to watch in this one. McCaskill rushed for three touchdowns against Tulsa last game, and that gives him seven over the last four contests. Only 20 teams are allowing more yards per carry than Tulane’s 4.7 this season, so this is a team that isn’t capable of slowing down a potent rushing attack. McCaskill also happens to be an extremely talented back that had offers from both the USC Trojans and Oklahoma State Cowboys out of high school. He should have a huge game and that will make it easy on quarterback Clayton Tune to pick apart the Green Wave secondary.

Houston is allowing just 9.25 points per game over the last four games, and the team now puts its strength to the test against a Tulane passing offense that hasn’t lived up to expectations this season. The Cougars should be able to keep the Green Wave in check, and it wouldn’t be that surprising if they held them to something like 24 points in this one. That would mean that the Cougars could score 35 and this game would still go Under the total. Overall, that makes this a great value for bettors looking to play this market.

The Under has hit in seven of the 11 games that Tulane has played as a home underdog under head coach Willie Fritz, with one of those contests ending in a push. The Under is also 7-0 when the Green Wave are coming off losses in four of their previous five games in that span. 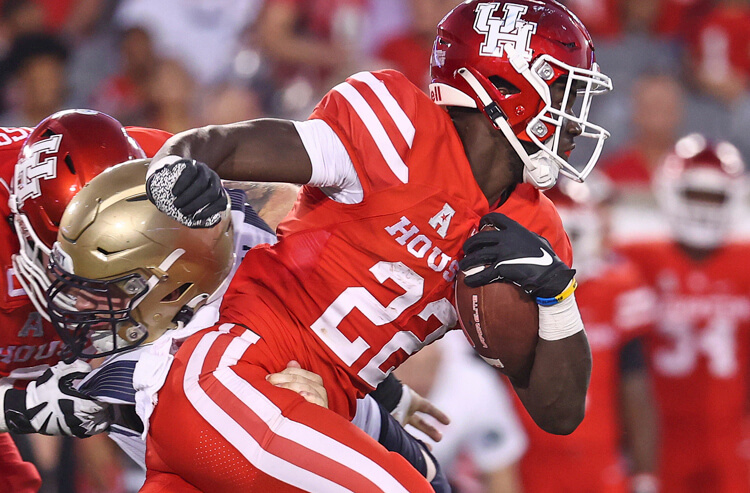 Houston vs Tulane Picks and Predictions: Cougars Ride the Wave
Provided by