Lakers vs Nuggets Picks and Predictions: L.A. Continues to Struggle vs. Quality Foes

L.A.'s wayward season takes it to Denver tonight, as LeBron James tries again to right this sinking ship. Find out if he can outmuscle the reigning MVP as we preview this game with our Lakers vs. Nuggets picks.

The Denver Nuggets have won three of their last four games and will now look to pick up another big win when they host LeBron James and the Los Angeles Lakers. After winning four in a row, the Lakers have now lost back-to-back games.

Will Nikola Jokic come up huge and lead his Denver team to a win over Los Angeles? Continue reading for our Lakers vs. Nuggets NBA picks and predictions for Saturday, January 15.

The Nuggets were laying 4 when this line opened and they’re still 4-point favorites across all books today. The total has, however, moved a little bit, with it opening at 225 and now being either 224 or 224.5.

The Nuggets are 6-2 against the spread in their last eight home games against teams with losing road records. Find more NBA betting trends for Lakers vs. Nuggets.

Lakers vs Nuggets picks and predictions

The Lakers appeared to be turning things around a bit last week, as they had won four games in a row and were in a groove on the offensive end. Now, Los Angeles has lost back-to-back games and looks like the same lousy squad it was before the winning streak. LeBron James is still playing out of his mind on offense for the Lakers, but he hasn’t had any consistent help and the team is a disaster on defense. The Nuggets have to be looking forward to playing them, as this is an opportunity for Denver to light it up for the second game in a row.

After struggling to get it going on offense pretty much all year, the Nuggets went wild against the Portland Trail Blazers last game. The Nuggets put up 140 points in that victory, and they should be able to put up a relatively big number again. Denver will play through Jokic all game here, and the big man is capable of either scoring on his own or finding open shooters. Last game, the Nuggets were knocking them down. They’ll likely be able to do so again with all the space they’ll get against the Lakers.

Defensively, the Nuggets will throw Aaron Gordon on LeBron in this game. That could make things really hard on the Lakers, as Gordon is a very good wing defender. LeBron will surely get his numbers no matter what, but Gordon will make him work for it. Considering the play of the supporting cast lately, that could be enough in Denver. It’s not an easy place to win games for the road team.

The Lakers have been playing some extremely high-scoring games as of late, and it’s understandable why some might be tempted to take the Over in this game. However, the Nuggets play at the sixth-slowest pace in the league this season and they’re going to want to slow this game down a bit. Los Angeles won’t have an answer for Jokic in the paint, so Denver can take its time and run its offense. Then, the Nuggets can just focus on playing sound defense on the other end.

Two of the last three meetings between these teams have also gone Under the total. And the Under is 5-1 when Denver is coming off a win. It’s also 23-8-2 in the Lakers’ last 33 road games against teams with winning home records.

The Lakers are 4-13 against the spread in their last 17 games against teams with winning records. So, while the team did go on a small winning streak recently, those victories mostly came against below-average opponents. They still have a lot to prove when it comes to being competitive against good teams and the Nuggets are a tough matchup for them right now. Denver is extremely disciplined and plays smart basketball on both ends. That’ll be trouble for a Los Angeles team that can be sloppy.

Until Davis gets back, look for the Lakers to continue to struggle. They’re relying too heavily on guys like Malik Monk and Talen Horton-Tucker at the moment. Both guys are talented but inconsistent. Meanwhile, Russell Westbrook has been a complete nightmare for the Lakers since they traded for him.

Did you know that if you parlayed today’s NBA Lakers vs. Nuggets predictions and picks in a single-game parlay, you could win $26.61 on a $10 bet? 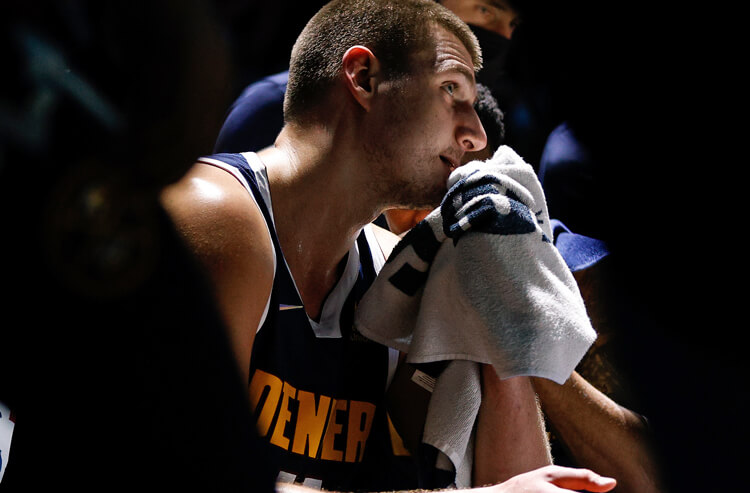 Lakers vs Nuggets Picks and Predictions: L.A. Continues to Struggle vs. Quality Foes
Provided by