Philly and Miami are both streaking, but the home side has played a far more consistent brand of basketball this season. Find out why we're feeling South Beach in this matchup of two of the East's best — here are our 76ers vs. Heat picks.

Saturday’s matchup between the 76ers and Heat features two teams squarely in the hunt in the Eastern Conference playoff picture.

Both teams are also red hot. Miami will be looking to make it five straight wins, while Philadelphia is hoping to make it nine wins in the last ten games.

Both teams have momentum but will be on the second leg of a back-to-back. Who has the upper hand in this tight matchup between two of the conference’s hottest teams?

Check out our NBA picks and predictions for the Philadelphia 76ers vs the Miami Heat on Saturday, January 15 to find out.

The Heat are 5-0 ATS in their last five games overall. Find more NBA betting trends for 76ers vs. Heat.

76ers vs Heat picks and predictions

These two teams met earlier in the season when the Heat came away with a 101-96 victory. Gabe Vincent scored 26 points for Miami in that contest, while Joel Embiid was held to only 17 points. It’s probably safe to assume those two things won’t happen again in this game, which bodes well for Philadelphia. It can also be stated that the 76ers are a different team, playing much better now than they were in the first matchup.

That said, Miami was without Jimmy Butler and Bam Adebayo in that first meeting and still came away with a victory. The Heat have performed well all season despite the notable absences in the lineup and have been consistently undervalued, sitting at 25-17 ATS on the season. Thanks to their commitment to team basketball and a suffocating defense, they’ve kept on ticking at all stops this season.

The return of Jimmy Butler on Friday night against the Hawks can only be a good thing. Butler made an immediate impact, finishing with 23 points and 10 rebounds in a narrow home victory.

It’s hard to find teams that remain consistently motivated over the long NBA season, especially one featuring a revolving door of roster movement. The Heat have been an exception, showing renewed focus after a down season a year ago. Their display of effort is about as consistent as anyone in the Association.

Both teams grabbed a win Friday night, meaning both will be on the second night of a back-to-back. This will also be the third game in four days for both squads. It’s a strange scheduling spot, but one that favors Miami. The Heat will be playing at home for the second night in a row, while the 76ers will have to travel.

Miami has been aces at home, sitting with a 13-4 straight-up record. They performed admirably in a lengthy road trip to start 2022 and showed no signs of a let-down in their first game back home. This team is rolling and we’re going to back them to pick up yet another win.

It’s a tale of two different teams for this Over. Miami has been an Over team all season thanks to lights-out shooting from deep, with a 26-16 O/U record. The 76ers like to slow the game down to a crawl and feature a Bottom-10 offense and Top-10 defense. The results have led to a 16-23-2 O/U record

Philadelphia has been an away underdog 12 times this season, cashing the Under nine times. That being said, we’re backing Miami in this contest and therefore believe that this game will play more into their style. The Heat are 6-0 to the Over in games with no rest.

Miami has been scorching the nets from downtown thanks to the stellar shooting of Tyler Herro, Max Strus, and Duncan Robinson. Jimmy Butler gives this team yet another weapon, and it’s no coincidence that they scored 124 points in his first game back. Embiid should play better than he did in the first matchup, helping push this one Over the total.

We can’t find it in ourselves to pick against this Miami Heat team right now.

After performing valiantly on the road trip, the Heat came home and welcomed the return of Jimmy Butler. It appears as though Bam Adebayo’s return is on the horizon, so this team isn’t going anywhere anytime soon.

The 76ers have been hot, but they’re still usually only in the discussion due to the Ben Simmons drama. Give us the Heat.

Did you know that if you parlayed today’s NBA 76ers vs. Heat predictions and picks in a single-game parlay, you could win $26.45 on a $10 bet? 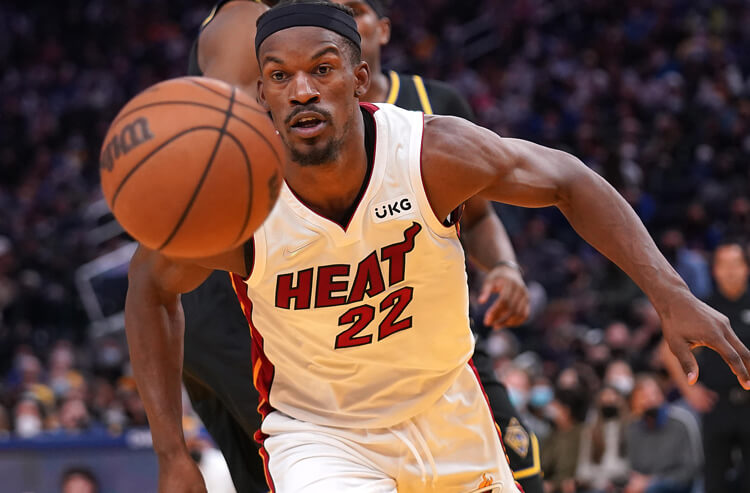 76ers vs Heat Picks and Predictions: Miami Brings A-Game at Home
Provided by