Hawks vs 76ers Game 2 Picks and Predictions: Expect the D to Tighten Up

The health of 76ers star Joel Embiid (knee tear) was a big question ahead of Game 1 but he suited up and dominated, scoring 39 points in the loss. Can he power the 5-point favorite Sixers in Game 2? Find out with our Hawks vs. 76ers picks and predictions.

The Atlanta Hawks and Philadelphia 76ers face off in Game 2 of their Eastern Conference Semifinals series on Tuesday night.

The Hawks upset the Sixers as 4.5-point underdogs in Game 1 but NBA betting lines still have them at +5 for the second contest in this best-of-seven series.

Here are our best free Hawks vs. 76ers picks and predictions for Tuesday, June 6, with tipoff at 7:30 p.m. ET.

PointsBet USA pegged Philadelphia as 4.5-point chalk early Monday morning, and by midmorning today, the number reached -6, where it remains at 5 p.m. ET. Point-spread ticket count is running 2/1 and spread money 4/1 on the 76ers. "Bettors all over Philly across the spread and moneyline," PointsBet's Patrick Eichner said, noting the Sixers are taking 69 percent of bets/78 percent of cash on the moneyline, as well. "The public is also loving the Over." The total is up to 224 from a 222.5 opener, with 85 percent of tickets/91 percent of cash on the Over.

The Hawks are 2-6 ATS in their last 8 road games while the 76ers are 8-3-1 ATS in their previous 12 contests at home. Find more NBA betting trends for Hawks vs. 76ers.

The big question for Game 1 of this series was the health of 76ers star center Joel Embiid, who has a small lateral meniscus tear in his right knee. Embiid suited up and dominated, scoring 39 points in 38 minutes but it didn't matter as the Hawks pulled off a 128-124 victory.

Since Nate McMillan took over as interim head coach of the Hawks on March 1, Atlanta has gone a sizzling 32-12 SU and 28-15-1 ATS.

That said, two of those SU and ATS losses came on the road in Philadelphia, and they were downright ugly. The 76ers destroyed the Hawks 127-83 on April 28 and followed up on that rout with a 126-104 beatdown two days later.

Although Atlanta's leading-scorer Trae Young didn't play during the embarrassing 44-point loss, he did play and scored 32 points in the rematch on April 30.

The Hawks' win on Sunday was due to a massive first quarter that saw them score a whopping 42 points. That number is especially shocking when you consider that Philadelphia had the second-best first-quarter scoring defense in the league during the regular season, holding foes to just 26.1 points per game.

Young was on fire in the first half, with Philadelphia bizarrely choosing to have Danny Green guard him, but he slowed down in the second half with Defensive Player of the Year candidate Ben Simmons guarding him on a few key possessions.

The 76ers ended up outscoring the Hawks 97-86 in the final three quarters and came within a basket of tying it up before Bogdan Bogdanovic sealed the game with a late 3-pointer.

Expect Philadelphia coach Doc Rivers to make the necessary defensive adjustments in Game 2 and look more like the team that finished the regular season with the second-best defensive rating in the league. Back the Sixers on the spread.

The hot shooting display by Atlanta was out of character for the 76ers, who limited opponents to just 45.3 percent shooting during the regular season — the fourth-best mark in the NBA.

The Hawks weren't bad on the defensive end of the floor, either, showing massive improvement from their pylon style of defense from the previous year.

Atlanta was 12th in the league in opponent shooting percentage (46.3) this season after letting foes shoot 47.8 percent from the field in 2020. The Hawks also slowed down their tempo considerably this year, playing at the ninth-slowest pace in the league.

Not only did the Hawks erupt for 42 points in the first quarter in Game 1, but the Sixers scored 41 points in the final frame. Those outliers rarely occur, so expect regression to set in along with a renewed emphasis on defense from both squads. Bet the Under.

Tobias Harris went off for 37 points on a whopping 29 shots in Philadelphia's Game 1 victory over the defensively inept Wizards in the first round of the playoffs. He also scored 28 points in the series-deciding fifth game.

That said, Harris has scored 21 points or fewer in his other four games during these playoffs and averaged 19.5 ppg during the regular season.

That makes the Over/Under on his points total of 21.5 seem a tad too high. Keep in mind that Harris typically didn't go over that number during the regular season, either, scoring 21 or fewer points in 12 of his last 13 games, including back-to-back contests against Atlanta 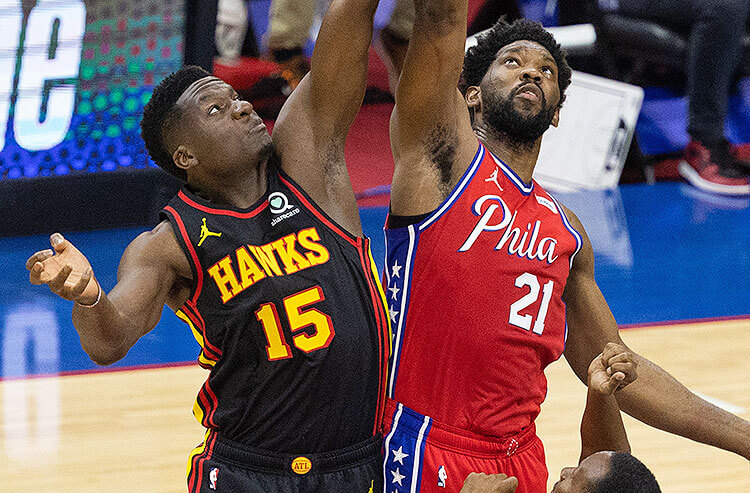 Hawks vs 76ers Game 2 Picks and Predictions: Expect the D to Tighten Up
Provided by