The Celtics fell short in Game 1 after carrying a lead into halftime. We like Boston to be better on defense this time around and cover as four-point dogs on Thursday night in South Beach. Find out more in our Celtics vs. Heat betting picks. 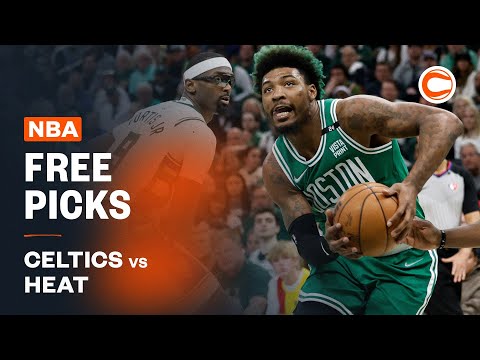 A catastrophic third quarter cost the Boston Celtics the series opener against the Miami Heat in the Eastern Conference finals. But, considering the Celtics’ situation heading into that game, basketball bettors have to cut them some slack.

Boston, which had only one day off after going a full seven physical games with Milwaukee in Round 2 and playing without starters Al Horford and Marcus Smart, watched an eight-point halftime lead erode with Miami exploding for a 39-14 third quarter, en route to a 118-107 victory.

That win has the Heat as 4-point favorites for Game 2 on Thursday. Check out our free NBA picks and predictions for Celtics vs. Heat on May 19.

Following Game 1, Miami hit the board as big as -5 but quickly dipped to as low as -3.5 with early action on Boston before buyback on the Heat settled the market consensus at -4 for Game 2. The total opened at 205.5 points and slid up to 207.5 as of Wednesday morning.

The Over is 8-3 in the last 11 meetings between the Heat and Celtics. Find more NBA betting trends for Celtics vs. Heat.

Before Tuesday, Boston was a series favorite to win the Eastern Conference crown but a 1.5-point underdog for Game 1. The Celtics slid to a closing line of +4.5 when it was announced Smart would sit with a foot injury and Horford was out with COVID for the foreseeable future.

But what that initial series price tells us is that bookies are banking on Boston to steal at least one game in Miami. Game 1 didn’t look promising — even before those absences in the lineup were announced — due to the Celtics having just one day off to rest, prep, and travel to South Beach for the series opener.

That lack of downtime showed up in the third quarter, with the Celtics’ heavy legs shooting just 2-for-15 from the field and coughing up the ball eight times — part of 16 total turnovers for the game. The Heat took advantage, winning the quarter by 25 points, and that third frame proved to be the decider, as the C’s had outscored the host team in every other quarter but the third in Game 1.

The Game 2 spread opened as high as -5, which means oddsmakers weren’t expecting Smart or Horford to return. However, despite Smart’s foot being reportedly so sore that he didn’t even attempt to test it before Game 1, he is trending towards suiting up tonight.

#NEBHInjuryReport for Game 2 vs Miami:

Horford, unfortunately, doesn’t have much time to clear COVID protocols before tonight, but even not being fully healthy, you have to like what you saw from the shorthanded Celtics for at least 36 minutes Tuesday.

Boston battled the Heat’s smaller rotation in the blocks, getting 48 points in the paint and shooting 55.6% on 2-point field goals for the game, and was 11 of 27 from 3-point range (41%) when you take out a dismal 0-for-7 third quarter effort from beyond the arc.

The Celtics’ 16 total turnovers translated into 19 points for Miami and tired legs left Boston’s defense out of position, committing 24 fouls for 34 free throw attempts for the Heat, who missed only four shots from the stripe.

There aren’t any major adjustments needed for the Celtics between Game 1 and Game 2, outside of a hot meal and a soft bed. Many of the team’s fatal errors in the opener stemmed from a lack of energy and focus, which are all products of fatigue on a tight travel turnaround and a short bench – as well as Horford’s sudden absence leaving a gap in Ime Udoka’s game plan.

Bookies predicted Boston taking at least one win in Miami and while it may or may not be Game 2, we’re expecting a better prepared Celtics squad to stay within the four points.

The Game 1 total closed at 203 points, which was the shortest Over/Under number of the 2022 postseason so far. Books opened Game 2’s total as low as 205 points and it has climbed 207.5 at most shops. That's a point higher than the opening total for Game 1.

The Heat and Celtics played above their postseason tempos in the opener, running out a pace rating of 97.0 in the opening half and 99.0 in the final two quarters. That helped eclipse that diminutive total by 22 points. Even without Boston’s third quarter collapse, this game was on course for 220-plus points and this minor tweak in total for Game 2 just isn’t enough.

As mentioned, Boston fired at an efficient rate on 2-point takes and shot 41% from distance when you take on the 0-fer third frame from outside. Jayson Tatum put up 29 points despite a crap game (2 for 9 from 3-point range, seven turnovers) and the Boston bench chipped in with 36 points, 10 rebounds, and six assists.

The final score for Game 2 could be a little lower considering how many times Miami went to the line for points scored with the clock stopped. The Heat were 30 for 34 from the stripe, including 14 for 17 in the third quarter, which was a product of the Celtics’ fatigue.

Jimmy Butler cashed in 17 of his 41 points from the free-throw line and scored plenty of easy buckets at the rim due to Boston’s miscues. Those chances won’t be as plentiful once the Celtics tighten up on defense in Game 2 but Butler can still get his.

There’s just too much firepower on the floor to stay below this short total in Game 2.

The first half of Game 1 is indicative of how this series could shake out — at least for these first two games in Florida.

Boston and Miami, two of the better defensive clubs in the NBA, posted advanced defensive ratings of just 112.5 and 126.5 respectively — a stark difference from their overall postseason metrics of 106.5 and 104.9.

The Heat have tremendous reserve players, who don’t allow the tempo or the team’s output to diminish when the starters take a seat, with guys like Tyler Herro and Victor Oladipo contributing. However, those reserves do allow for a soft spot in this Miami defense. Mix in lingering injuries for veteran forward P.J. Tucker and the absence of gritty guard Kyle Lowry, and the Heat’s defense can be beaten.

Smart’s injury is a big knock to Boston’s game plan. The Defensive Player of the Year is the catalyst for one of the most dominating defenses since the New Year and was vital in slowing down the Bucks' backcourt in the conference semis, owning a defensive rating of 101.3 in that series. Even if he does battle his way through injury in Game 2, he’ll be a step slower against a dangerous Miami backcourt that likes to attack.

Did you know that if you parlayed today’s NBA Celtics vs. Heat predictions and picks in a single-game parlay, you could win $25.69 on a $10 bet?