While Giannis and Trae Young's availability is uncertain, the Hawks need for a win is clear as they trail 3-2 with the series returning to Atlanta. Can the Hawks do enough on their home floor to force a Game 7? Check out our picks and predictions.

The war of attrition taking place to decide the Eastern Conference continues on Saturday, with the Giannis-less Milwaukee Bucks taking their 3-2 series lead on the road to visit the Atlanta Hawks.

The Hawks, without Trae Young for a second-straight game on Thursday, dropped Game 5 to set up a do-or-die game at home Saturday.

Can Atlanta stave off elimination to force a Game 7? Find out in our free NBA betting Bucks vs. Hawks picks and predictions for July 3.

The Under is 5-2 in the last seven meetings between the Bucks and Hawks. Find more NBA betting trends for Bucks vs. Hawks.

The Hawks may be down 3-2 in the series, but it appears they are winning the race to get their superstar back in the lineup. Upon Young being ruled out for Game 5, it was reported it was done with an aim for a Game 6 return at home, and he'll do just that. Antetokounmpo, on the other hand, is out Saturday and most worrying is that the Bucks have not provided any real information on his injury.

Young's return to the lineup comes after the Hawks have received a different kind of boost.

The first gut-punch Atlanta took in the postseason was DeAndre Hunter's season-ending injury. A multi-positional defender who can knock down threes at a consistent rate, Hunter is the epitome of a 16-game player, and his absence left the sense the Hawks were a player short. However, Cam Reddish's return from injury has changed that.

Reddish has been a revelation over the past two games for the Hawks, playing outstanding on-ball defense for a team crying out for it. Most indicative of Reddish's impact is his Game 5 +1, while all other players to top 20 minutes finished with a negative plus/minus (and Danilo Gallinari was the only other player with a plus/minus higher than -11 in over 20 minutes). One of Atlanta's biggest strengths in the postseason has been its depth, and Reddish replenishes it in a major way.

The Hawks were among the best teams against the spread at home during the regular season, with their 27-16 record behind just the Jazz and Suns, while nobody covered at a higher average than Atlanta's +3.9. With Young's return looming and a genuine home floor advantage, count on Atlanta to cover and force a Game 7.

Game 5 saw the lowest total of the series, after Game 4 finished with just 198 points between the two teams. Despite the absence of both Giannis Antetokounmpo and Trae Young, however, Atlanta and Milwaukee cleared the 213 total by 22 points in a 123-112 Bucks win.

It was an anomalistic game in what has been a tightly contested series. One of the worst defensive performances of the season from Clint Capela, an All-Defense caliber player this year, aided the Over cause as Brook Lopez and Bobby Portis combined for 55 points and were +17 and +14 respectively, while Capela finished as a -11.

With the series still low-scoring, as the two teams have combined for an average of 218.6 points per game, the total has not ballooned much despite Game 5, and rightfully so. Both teams operate in the halfcourt, and their slow-paced offense has only gotten slower as the postseason has progressed. The pace rating in this series, 96.9, is a decrease from both Atlanta and Milwaukee's regular season and postseason pace rating.

The availability of Young does little to change this pick, as his presence will only heighten the deliberate, slow-paced nature of their offense.

The game may hinge on Atlanta's superstar's return, but the total won't. Take the Under.

In addition to Bobby Portis and Brook Lopez putting on a pleasant Tim Duncan and David Robinson impression in the frontcourt, one of the biggest drivers in the Bucks' Game 5 win was Jrue Holiday. The former All-Star's up-and-down first season in Milwaukee has been marked with a disappointing postseason, during which his points, steals, and blocks per game averages have dropped from the regular season.

However, Holiday delivered in a major way in Game 5, dropping 25 points on the Hawks while adding 13 dimes and six boards. Holiday's performances at home have been consistent throughout this series, as he's averaging 26.6 points in three games in Milwaukee in the Eastern Conference finals. In Atlanta, however, he's averaging just 12.5 points per game, a mark weighed down by a six-point effort in Game 3.

If the Bucks are going to close the series out on the road, they're going to need a big scoring night from Holiday. We like Atlanta to hold serve at home, and Holiday's inconsistency is a part of that. 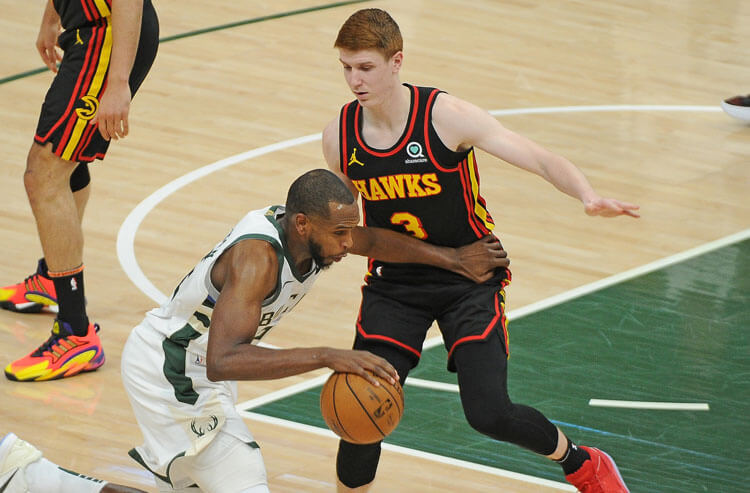 Bucks vs Hawks Game 6 Picks and Predictions: Holding Serve at Home
Provided by