Toronto has had few answers for Philadelphia in this series, and with its back against the wall, might not have enough fight left to topple what's clearly the better team right now. Find out more with our 76ers vs. Raptors NBA betting picks.

The Philadelphia 76ers are on the verge of a bit of catharsis for the 2019 East semis, as they can sweep the Toronto Raptors out of the playoffs with a win Saturday afternoon.

Toronto has fought valiantly all season despite injuries, but more ill-timed ailments have helped put them in this 0-3 hole.

Find out if there's one last gasp for the Dinos as we break down our NBA picks and predictions for 76ers vs. Raptors on April 23.

The Sixers opened as 2.5-point favorites as Wednesday turned to Thursday, being steadily bet up to either -3 or -3.5 as of Friday afternoon. The total opened at 213.5, with some books inching down to 213.

Under is 6-1 in 76ers' last seven playoff games as a favorite. Find more NBA betting trends for 76ers vs. Raptors.

76ers vs Raptors picks and predictions

It all comes down to this afternoon for the Raptors, who fought tooth and claw to secure a playoff spot — beyond most preseason expectations — only to run into a pretty awful matchup in the opening round.

See, the Raptors aren't exactly big on size, and have to line up against bruising center and likely MVP-runner-up Joel Embiid. While Toronto's amorphous mob of long-limbed 6'9" dudes pestered teams during the regular season (NBA's second-best defense over the final 15 games), it's been highly ineffective against Philly, posting a 127.1 D-rating — inches away from the playoff-low and a mark that would've been by far the worst in the NBA over the entire season.

Reports surfaced Friday night that Embiid was battling a torn thumb ligament, but he's still on track to play in Game 4 and has toughed it out through worse before. If anything, Embiid's injury should only give Philly further impetus to close this out today and maximize his rest before the next round.

Embiid's only been part of the problem, and the Raptors being in a 3-0 hole despite him shooting 5-for-15 in Game 1 isn't a great sign. Tyrese Maxey has been a straight-up liability for the Raps' backcourt, and the Sixers are dominating despite James Harden scoring just 18.3 ppg on a fairly bad 40.8% clip so far in the series, which mirrors his season average, but should be regarded as a floor.

Harden's a renowned playoff ghost, but that will mean less with Embiid getting what he wants,  Maxey running amok, and even Tobias Harris averaging 19 ppg on 57.4% — The Beard can take on more of a playmaking role with that kind of firepower around him.

The Raptors, conversely, have struggled to find consistent offense. Fred VanVleet has been abysmal from the field the past two games (10-for-36), while Pascal Siakam has also struggled to produce on his regular-season par (18.7 ppg on 40.8% shooting, compared to 22.8 on 49.4%). While OG Anunoby has been great, and Gary Trent Jr. finally showed signs of life in Game 3, the Raptors just don't have the offensive depth to test Philly if VanVleet and Siakam aren't firing, especially with surging rookie Scottie Barnes sidelined.

The Sixers have outscored Toronto by 15 points per 100 possessions in this series, and with one foot in the grave and no clear star to step up and answer Embiid, there's little reason to expect them to turn the tides Saturday.

Toronto's been outclassed on both sides of the ball in this series, and while its season has to be seen as a success on multiple levels, it's probably going to end this afternoon.

The Raptors and Sixers were two of the NBA's slowest teams in the regular season (both ranked Bottom 5 in pace) so it was apparent that we were in for a slog in this first-round matchup.

But holy crap have these games been glacial: an 88.43 pace, which hasn't been logged by a team over a playoff run since the Grit 'N Grind Grizzlies in 2017.

The Raptors' offensive troubles certainly haven't helped Over backers much in this series, and the Sixers' bloated offensive rating through the first three games probably gives us even more value on the Under.

While the Raptors fundamentally match up poorly with the Sixers on defense, their D isn't as bad as the results from Games 1-3 suggest, and you can bet (literally) that Nick Nurse will stage his last stand on that end and throw the kitchen sink at Doc Rivers.

Keep in mind that this series is 1-2 O/U against this total, including a Game 3 that came nowhere near the Over despite going to overtime. Count on more plodding.

Make picks on tonight's Raptors game for a chance to win Covers swag!

As mentioned above, Tobias Harris has been in a groove in this series, averaging 19.0 ppg on 57% shooting, providing Philly with some added scoring in light of James Harden's continued shooting regression.

With The Beard firing up bricks, Harris could see more of the offense trend in his direction for a Sixers team that will want to take no chances this afternoon and allow Embiid's thumb enough time to rest for Round 2. Embiid's injury itself will probably funnel even more looks Harris' way.

What's more, with Matisse Thybulle out, Harris has tangentially seen more minutes, playing 42 in regulation in Game 3. Count on him to not only see a ton of floor time, but plenty of opportunities to top this pedestrian total. 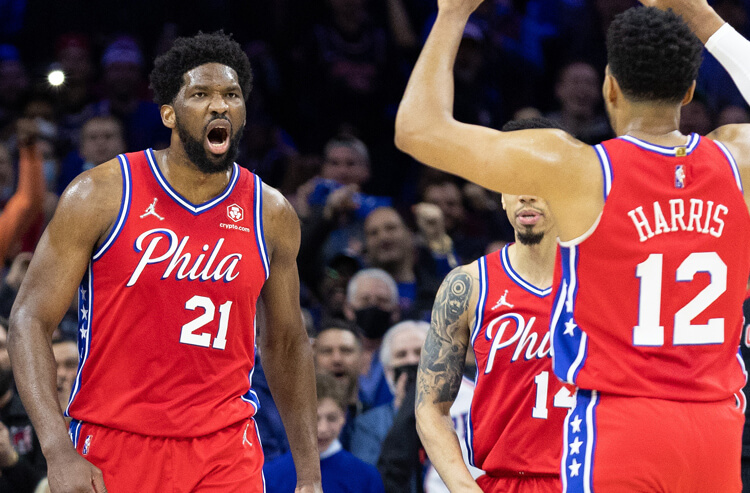