For various legal reasons, there is no wagering offered on horse racing by the legion of online sports betting apps and websites that have launched in Ontario. Woodbine wants to change that.

If one company's efforts are successful, online sportsbooks in Ontario could be taking bets on horse races long before the next Kentucky Derby.

For various legal reasons, there is no wagering offered on horse racing by the legion of online sports betting apps and websites that have launched in Ontario since April, when the province opened a new internet-gambling market for private-sector operators.

Toronto-based Woodbine Entertainment Group — the largest operator of professional horse racing in Canada — wants to change that, by integrating its racing content into the legal sportsbooks that are now much more numerous in Ontario.

“Our expectation is that we'll be in market by the end of this calendar year,” said Michael Copeland, who was recently promoted to president of commercial at Woodbine after serving as its chief commercial officer since May of 2021. “We're very close to having our final build completed.”

Woodbine will require approval from the Canadian Pari-Mutuel Agency (CPMA), a federal body, before the betting engine can be put to use. Yet Copeland said both the CPMA and iGaming Ontario, a provincial agency that is legally responsible for the iGaming market, have been supportive of the project.

Copeland also said that Woodbine has been providing “extensive details” to the two regulatory bodies about what they can expect from the company. This way, he hopes, there will be no surprises when the final model is delivered to the watchdogs for review.

“We're just literally crossing the t's and dotting the i’s on that,” Copeland added.

If the effort is successful and approved by regulators, bettors could eventually be able to log into the same sportsbook they use to wager on football and other sports and see a horse-racing tab alongside those other offerings. Wagers could then be placed there on a race that would ultimately run through Woodbine's systems and under its federal license for pari-mutuel wagering. (Fixed-odds betting on horse races is not allowed in Canada.)

The project is poised to add one of the oldest forms of gambling in Canada to Ontario’s iGaming market, which is the first of its kind in the country. It’s also something that Woodbine could export to other provinces, where government-owned lottery and gaming corporations remain the only legal providers of online sports betting.

“We could replicate this content-distribution model in other jurisdictions, and we hope to do that,” Copeland told Covers in an interview on Friday.

While the timeline envisioned by Copeland and Woodbine could mean that Ontario bettors will be able to wager on next year’s Kentucky Derby or Queen’s Plate (which could be renamed following the recent death of Queen Elizabeth II and the accession of King Charles), it will be too late for another major event.

The third and final jewel of the OLG Canadian Triple Crown — the Breeders’ Stakes — will be held on Sunday at Woodbine Racetrack in Toronto. Nine three-year-old thoroughbreds will take to the 1.5-mile E.P. Taylor Turf Course for the 131st running of the race, which has a $400,000 purse this year.

A major event like the Breeders should pique the interest of more casual bettors. However, when Ontarians open up their wagering apps on Sunday they’ll see plenty of football-related betting markets but no horse racing.

The reasons why include that federal lawmakers passed a bill last year authorizing Canadian provinces, such as Ontario, to “conduct and manage” single-game sports betting. Horse racing, however, was exempt from the bill (at the urging of the horse-racing industry), leaving the only legal form of wagering on the sport in Canada the pooled, pari-mutuel model of betting that is overseen by the CPMA.

The only holder of a federal pari-mutuel wagering license in Ontario is Woodbine, which runs betting operations at tracks, OTBs, and through the company's two online platforms: HPIbet and Dark Horse Bets (which take action on races outside of Canada). And, while Woodbine wants to act as a supplier of horse-race wagering to Ontario’s iGaming operators, which would allow them, in turn, to offer those markets to customers, it hasn’t happened yet.

So, when Ontario launched its new iGaming market, sportsbook operators such as bet365, which previously offered horse racing in the province, had to drop those betting markets.

"The regulated igaming framework in Ontario does not allow for horse racing at this time, in light of the specific provisions related to horse racing set out in the Criminal Code, Canada, which is federal legislation," a spokesperson for the Alcohol and Gaming Commission of Ontario (AGCO) told Covers in May.

Woodbine is hard at work trying to alter that status quo, as sportsbook customers are “clamouring” for horse racing, Copeland said. Some of those Ontario-based bettors may have been horseplayers already but woke up on April 4 to find their previous place of wagering was no longer accepting action on races.

The horse-racing industry is trying to attract fresh blood as well, as the sport of kings has fallen behind others in terms of interest from casual fans and bettors. Thousands of people are employed in the horse-racing sector, and gambling is crucial to funding those jobs.

Although Woodbine has had a “strong year,” Copeland stressed the importance of drawing in new customers, with the integration into the broader sports-betting scene part of those plans. Harnessing the influx of online sportsbook operators, their bigger marketing budgets, and their user-friendly technology could all be a boon for horsepeople.

“There's a real urgency to grow to support this industry,” Copeland said. “It is one that is wagering-driven. And efforts like sports betting and getting integrated into that new distribution channel is incredibly important to the future of the industry because it's going to open us up to an entirely different customer base.”

Woodbine would also like to have retail sportsbooks at its properties in Ontario, such as its namesake track, and feels like it is perfectly equipped to do so, having taken in-person bets on horse racing for years. However, land-based gaming in Ontario is the turf of Ontario Lottery and Gaming Corp., and no brick-and-mortar sportsbooks have been opened yet.

In the meantime, Woodbine is intent on finding new ways to showcase racing in Ontario and to attract a new clientele — and all without abandoning their traditional customers and what they like about the sport. Modernizing marketing efforts and the at-the-track experience are part of that, with Copeland pointing to Woodbine's new Stella Artois Terrace as an example.

“We need to sort of tailor to how people want to spend their time now,” Copeland said. “It's less about sitting in a seat and just passively watching a sport like it was 20 years ago. It's much more about having a social experience in the environment that sports also takes place.” 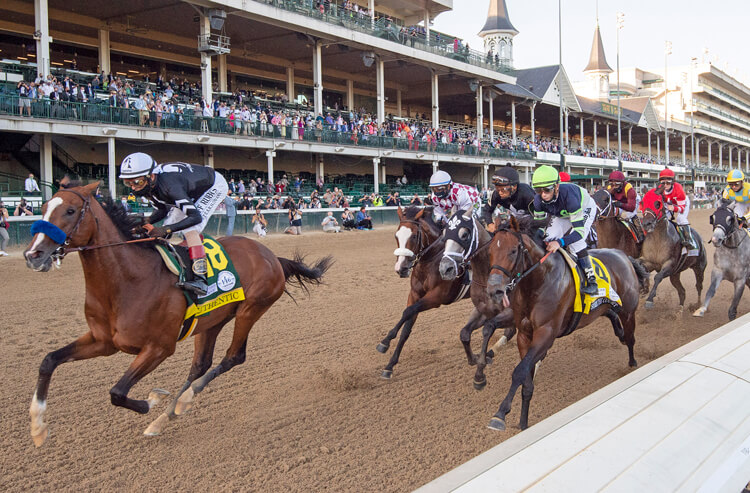