The NHL's regular season begins again tonight — and it's going to be an important one for the league and its sports-betting ambitions.

Jay Kornegay was recently checking future bets that SuperBook Sports had taken so far on the next National Hockey League champion. While doing so, he noticed a blank line.

That empty slot meant at least one wager had been placed on every team in the NHL to win the Stanley Cup — except one. The Calgary Flames, who last season missed the playoffs after finishing fifth in the league’s COVID-19-necessitated Canadian division, had not drawn a single bet at the SuperBook to lift the Cup.

“The guys around here go Cal-gary, but, yes, they have yet to attract one ticket on them to win the Stanley Cup,” said Kornegay, executive vice president of sports operations for Las Vegas-based SuperBook, in a recent interview with Covers.

Fortunately for the Flames, they can soon get to work on proving the punters wrong, because the NHL’s regular season starts again tonight. And, before the first game for Calgary on Saturday, NHL fans will even be able to check the odds for the game on the league’s official website.

The NHL didn't always embrace sports betting. However, more than three years ago, the floodgates of legal sports betting opened in the United States. The National Hockey League, which had once helped try to hold back those waters, began surfing them.

Now, the NHL is arguably the “Big Four” sports league that has leaned the hardest into sports betting. No team in the NFL, NBA, or MLB has an ad for a gambling company on their jersey. Next year, though, there will be one on the sweater of the NHL’s Washington Capitals, who also boast the first-ever sportsbook to open inside a U.S. professional sports facility.

The league and its teams have partnered with a variety of online sportsbooks, such as Betway. The Great One, NHL legend Wayne Gretzky, is even a brand ambassador for BetMGM.

What’s more, the NHL has new television deals, a brand-new team, and new markets in which single-game sports betting is now legal. There is also a full season to be played, rather than a COVID-19-shortened one, making the 2021-22 regular season important for the NHL and its sports betting-related ambitions.

“It's now become another way for fans to connect with our game, for sports fans to maybe take an interest in our game,” NHL Commissioner Gary Bettman said during an interview on TSN 1050 Toronto radio this past January. “And when these things happen, you have to be a bit of a pragmatist. My stance 10 years ago was I didn't want it to become legal. Okay, it's now legal, so we deal with it.”

.@NHL Commissioner Gary Bettman on the growth of sports betting for the league and why their stance on it has changed in recent years. pic.twitter.com/W6QdNIbtZM

There has recently been another big change in the sports betting world, and particularly so when it comes to hockey. That's because this NHL regular season will be the first since Canada legalized single-game sports betting.

The NHL is aware it has an edge in hockey-loving Canada compared to some of its peers. And for sportsbook operators looking to break into the Canadian market — if and when they’re given the green light by provinces to do so, such as in the competitive internet gaming market being developed in Ontario — hockey will likely be a key part of their strategy.

“Because in Canada, to be successful from a marketing standpoint, hockey is the most powerful asset that you can have,” said Keith Wachtel, chief business officer and senior executive vice president with the NHL, in an interview with Covers near the end of July.

Like other leagues, the NHL is looking to increase revenues and “fan engagement” using sports betting. When people have money riding on the outcome of a game, they tend to watch that game.

As part of these efforts, Wachtel said the league sees sports betting as an opportunity to really show its “leadership role in technology,” such as the tracking of the puck and players during the game. That could translate into prop bets on things like the speed of shots.

The NHL and Switzerland-headquartered Sportradar announced in June a 10-year partnership for official betting data and streaming rights. As part of the partnership, Sportradar will distribute data and stats to sportsbooks, including real-time information from the NHL's Puck and Player Tracking technology.

But it is relatively early days for such betting markets, and the NHL still has to walk a fine line between embracing gambling and not alienating fans who are opposed. The league also recently had to deal with allegations that San Jose Sharks forward Evander Kane was betting on its games, which, after an investigation, the NHL said there was “no evidence to support.”

Furthermore, the only online sportsbooks that Canada’s provinces have currently authorized to take single-game bets belong to government-owned lottery and gaming corporations, including Ontario Lottery and Gaming Corp.

OLG said Tuesday that the NHL was the most popular league on which to wager in a recent survey of the province's sports bettors. Of those surveyed, 61 percent picked the NHL as the top destination for their bets.

And interestingly, on OLG's new online sportsbook PROLINE+, 27 percent of bets on which team will win the Stanley Cup this season have been placed on the Toronto Maple Leafs, who haven't won the Cup since 1967.

“We believe that we are an underserved property in the sports betting landscape ...  just because of the ability to bet and how people bet versus, say, the NFL,” Wachtel said. “So we expect the handle to grow significantly in the sport of hockey in Canada.”

21% of the bets in the Stanley Cup market at @DKSportsbook are on the Avalanche pic.twitter.com/Y857VMcas7

Still, the pecking order of sports betting in the United States goes something like this: football, basketball, baseball, and then — probably, depending on where you live —  there’s hockey.

Take, for example, the state of Colorado. According to the Colorado Division of Gaming, hockey alone accounted for 4.9 percent of wagers in February, during the National Hockey League’s last regular season. That trailed the 35.7-percent share of professional basketball, the 14.8 percent reported for college basketball, and the 9.1-percent chunk attributed to pro football.

The volume of betting on hockey has still yet to eclipse that of football, basketball, or baseball, according to Johnny Avello, director of race and sportsbook operations at DraftKings Inc.

Even so, DraftKings’ handle on hockey has been "pretty good," Avello said in an interview.

“And I think it'll continue to grow for us,” Avello said. “Hockey’s a … great sport to bet on. The in-game wagering certainly has grown on that also.”

Hockey is finally back! Who's your early bet to lift the Stanley Cup? ???????? pic.twitter.com/o53GFRkjMN

The NHL’s popularity among bettors has indeed been growing in the U.S., particularly since the Vegas Golden Knights began playing in 2017. According to Wachtel, when the Knights arrived, the wagering doubled on hockey in Las Vegas.

“You always heard, ‘would hockey work in the desert?’” said Chuck Esposito, race and sportsbook director for the Red Rock Casino, Resort and Spa in Las Vegas, in a recent interview. “And not only has it worked, it thrived in the desert.”

Esposito chalked up increased interest in hockey in part to transplants in the city, but mainly because of the success of the Knights.

The Knights’ success has included making it to the Stanley Cup Final in their first year of play, with Esposito saying their winning ways have helped increase overall knowledge among guests about the NHL. Now, it's no longer crazy for players to ask for hockey to be put on the main screen in the sportsbook.

There has been “dramatic growth” in wagering on the betting options that the league provides, such as on the outcome of each period of play, Esposito said.

“And that's all a product, I think, of the success of the Knights,” he added. “But it has really carried over to the entire league.”

One team that is drawing a fair amount of action already may be due to the Knights’ early track record as well.

The Seattle Kraken, which will play their first-ever NHL regular-season game against the Knights on Tuesday, is one of two teams garnering a good deal of bets to win the Stanley Cup outside of the top teams in the league, Esposito said. That is likely because of the Knights' trip to the Stanley Cup Final in year one, in addition to the relatively big number that sportsbooks still have up for Seattle, the bookmaker noted.

The other team drawing an interesting amount of action for the veteran bookmaker is the Chicago Blackhawks, to which former Knights goaltender Marc-Andre Fleury was traded in the offseason.

“There seems to be a tremendous amount of parity in the National Hockey League, where every year you have about a 50 percent turnover of teams that make the playoffs and don't make the playoffs,” Esposito said. “So you're looking for value.”

A return to the Worldwide Leader

In addition to the Kraken, another sign of the changing times for SuperBook’s Kornegay is a lack of interest in the once-successful Detroit Red Wings. According to Kornegay, the Wings have only one ticket on them to win the Stanley Cup at the SuperBook — and it's just a $10 wager.

The Wings also have to play in what is expected to be a competitive Eastern Conference. In the Western Conference, the futures betting at SuperBook has been more top-heavy.

“We still have the two favorites, and that’s the (Colorado) Avalanche and the Knights, that are both five-to-one,” Kornegay said. “And I think part of that is because the West is very weak. There's a huge gap between the Avs, Knights, and the rest of the Western Conference.”

But betting patterns could change once the games begin. And when they do, they could be viewed more widely, as they will once again be broadcast this season on ESPN, as well as on TNT.

Kornegay noted that SuperBook recently launched online in New Jersey, where they expect more handle for hockey than in some other states. However, he expects the new TV deal will stoke betting interest even further.

“Their new contract with ESPN will certainly help handle,” Kornegay said. “Given that more exposure to the league will certainly translate to more betting action at the windows.” 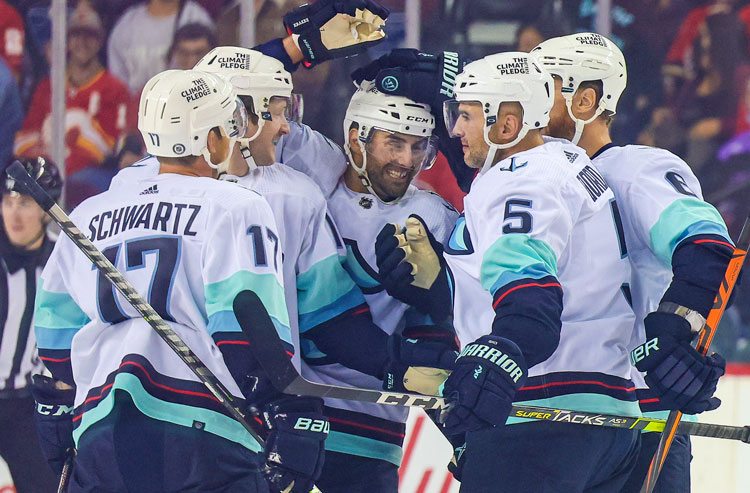