After the front-running style of Always Dreaming proved to be advantageous over the sloppy surface at Churchill Downs, it’s no surprise to see him as favorite for the 142nd running of the Preakness Stakes.

After the front-running style of Always Dreaming proved to be advantageous over the sloppy surface at Churchill Downs, it’s no surprise to see him as favorite for the 142nd running of the Preakness Stakes. He's joined by many familiar faces hoping to rebound off the Kentucky Derby and new horses which try their luck at capturing the second jewel of the Triple Crown.

Here’s a horse-by-horse breakdown for this Saturday’s Preakness Stakes:

1. Multiplier (Jockey – Joel Rosario, 30-1): He's one of few entering fresh after skipping the Kentucky Derby. That's partly due to how long it took this horse to break his Maiden and his relative inexperience. His biggest win was in the G3 Illinois Derby in a time of 1:47.98 - the second fastest in the race's history. Pedigree wise, his sire The Factor is known for his sprinting talent, but this colt looks to have stamina on the grandam side, so I feel pretty confident in saying distance will likely not be an issue. He takes a huge jump up in class today but being lightly raced could work to his advantage.

2. Cloud Computing (Javier Castellano, 12-1): He's another lightly raced colt which may be sitting on a big effort. The Preakness has historically been favorable to front-running horses and speed, so he should warrant some consideration. He may work out the perfect stalking trip and save ground racing behind front runners Conquest Mo Money and Always Dreaming. Jockey wise, he receives a big upgrade to Castellano who is choosing to ride him over his Derby mount of Gunnevera.

3. Hence (Florent Geroux, 20-1): I'll give him a pass for not taking well to the off track at Churchill Downs. He never seemed comfortable and not many horses were making up ground late. He's capable of a bounce-back effort Saturday. He did have a nice rebounding effort after the disappointing seventh in the Southwest Stakes, coming back to win the Sunland Derby a little over a month later. Trainer wise, it doesn't get much better than Steve Asmussen, who has won the Preakness Stakes with the likes of Curlin in 2007 and super filly Rachel Alexandra in 2009.

4. Always Dreaming (John Velazquez, 4-5): He's still undefeated at three years old and that’s quite the feat, although his front-running style definitely worked to his advantage in the Derby. Pletcher is a trainer that likes giving horses adequate rest between races. He's started 48 Kentucky Derby horses but only ran three back in the Preakness. There’s no denying Pletcher has struggled at Pimlico. Pletcher has lost 17 straight on dirt when racing within 14 days of his last start. Perhaps those statistics are enough to warrant a play against the short priced favorite.

5. Classic Empire (Julien Leparoux, 3-1): He broke very poorly in the Kentucky Derby and lost the race right from the very beginning. He prefers being closer to the pace and he will have every opportunity to do so racing over a (hopefully) fast track, and versus a much smaller field in the Preakness Stakes. While his last effort was pretty poor based on what we've seen this colt capable of doing, it’s a definite positive sign to see that he made up ground and closed for third. Pay attention to the status of his right eye. He suffered an eye abrasion and was unable to open it the following day in the Derby. Although, I'm fairly confident connections wouldn't race him if he’s not at 100 percent, but it may be something to watch out for.

6. Gunnevera (Mike Smith, 15-1): Nobody was closing in the Kentucky Derby, due to the poor track conditions but mainly the slow-pace scenario, so I can't necessarily fault him for a disappointing showing. He finds a new jockey in Mike Smith and I always look at the addition of someone of his caliber as a positive thing. Perhaps this means we may see Gunnevera positioned a little bit closer to the pace? It wouldn't surprise me. He may be worthy of a closer look because the odds will be good if you'd like to take a shot against the shorter priced horses.

7. Term of Art (Jose Ortiz, 30-1): This colt will be racing with blinkers on after racing without them for his last three starts. He did race his first six career races with them and those were some of his best efforts, so I'm not surprised to see connections return to what worked. It's nice to see him with a graded stakes win under his belt - it was at two years old - but he's capable of competing with graded-stakes horses. He hasn't raced outside of California before, so I'm interested to see how he takes to mostly East Coast competition. Likely overmatched.

8. Senior Investment (Channing Hill, 30-1): He's entering today off a victory in the G3 Lexington at Keeneland and there's something to be said about entering with a little bit of confidence off a victory. He takes a huge jump up in class Saturday to try mostly pure Grade 1 winners, and that may be too much to handle. He would need to cut seconds off his time and put forth by far the best effort in order to contend. He’s a huge long shot and his odds will certainly reflect that at post time.

9. Lookin At Lee (Corey Lanerie, 10-1): He surprised many rallying up the rail to finish a very game second to the eventual winner Always Dreaming in the Kentucky Derby. He's a colt that has been improving and the effort he puts forth in races are very apparent and definitely a positive trait to see out of young horses. He's one of a few in the Derby that showed a particular affinity for the off track. With a faster pace upfront, would he have been able to track down Always Dreaming? Not likely, but it's possible. He prefers racing longer where there's a little bit more ground traveled. You may want to wait until the Belmont before backing this colt.

10. Conquest Mo Money (Jorge Carreno, 15-1): This speedster will most likely take to the Pimlico dirt surface and appreciate racing the shorter distance of the Preakness. He skipped out on the Kentucky Derby and the extra month of training he's received from his last start is an added bonus especially for young horses. He'll almost certainly be forwardly placed and his early-running style helps his chances greatly. He narrowly missed edging Classic Empire in his last start too, so he definitely warrants some serious consideration. 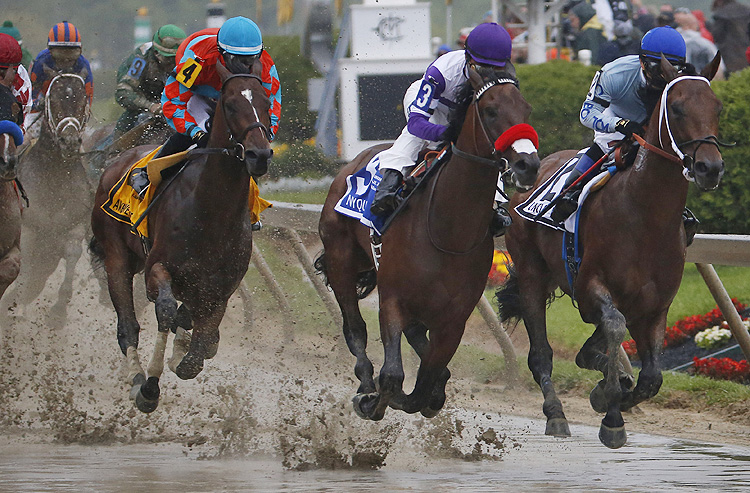