With Tiz The Law not participating in the 53rd Haskell Stakes, the favorites for this weekend at Monmouth Park are Authentic, Dr Post and Ny Traffic.

Haskell Stakes picks have been added to the Road to the Kentucky Derby series, awarding points on a 100-40-20-10 scale towards the September 4 running of the Kentucky Derby. With Tiz The Law not in the field, there are a few horses standing out as the 53rd Haskell Stakes favorites, where a win also offers a paid automatic berth to Longines Breeders’ Cup Classic in November.

This lightly-raced Quality Road son looked very impressive closing late in the Belmont Stakes, and thankfully doesn’t get a rematch versus Tiz The Law here today. With lots of speed entered, this race could set up well for him to make a late-stretch rally. If you can take anything from his Belmont Stakes effort, it's that he belongs competing versus graded stakes company, and continues to show dramatic improvement from start to start. He's a major player in this race and benefits the absolute most from the influx of early speed and horses likely to be vying for the front end.

Looked very impressive winning his first three starts in gate-to-wire fashion. In his most recent effort, he was second to a very game Honor A.P., who was able to capitalize off a perfect trip sitting just behind some of the early speed. Look for a trip similar to the most recent one that just beat him – stalking behind some of the early speed in this field. Based on what we have seen in his first few pari-mutuel starts, along with getting jockey Mike Smith on board for the first time, he looms as the one to beat.

His only two victories have come versus claiming company, so the move up to try graded stakes ranks is enormous and he appears overmatched. Despite the move up in class, trying his luck last time out versus decent optional claiming company at Gulfstream Park, he finished a very respectable second, beaten only by three-quarters of a length to Sole Volante. In today's Haskell, look for this colt to push the pace early on. A trip positioned just behind some of the early speed could work to his advantage to hit the board at a big price if he continues to improve.

Tries his luck at the route distance for the first time. Unfortunately, he seems like a one-way speed type horse, as he has tired late after getting to the front in three consecutive races following that Maiden breaking score. It looks like this colt will be the one on the front end dictating the tempo as he has been able to get out to quick breaks, but to expect him to hit the board at a big price is very unlikely as he's struggled versus substantially easier. Toss.

Through nine career starts, he's only tried his luck racing on the dirt once before, and that was a poor effort where he faded late versus graded stakes company in the Risen Star Stakes. Slow starts have been plaguing this runner, and although that is not necessarily a bad thing versus this field, his efforts versus stakes company have not been on par. He's been a huge price in his effort versus stakes company and looks to be a huge price once again today. He will be the longest shot on the board, and for good reason.

Showed early speed in his most recent race and got involved in a pace duel upfront early. That ultimately cost him any chance of winning the last start and he faded to a sixth-place finish. Most of his efforts have come at short sprinting distances, where he's attempted to wire the field. Tiring late versus quality stakes runners has been a recurring issue with this colt, who seems better-suited racing at a shorter distance.

One of many in this field who want to be forwardly placed and out of the horses likely vying for early positioning, this colt looks like the most likely to find the winners circle. The outside post should have this colt sent along and put on the lead, but at what cost will getting the lead come at, in a field with a lot of early speed? Based on his early running style and how he has performed in the Derby preps, he could hang around late to round out the trifecta or superfecta. 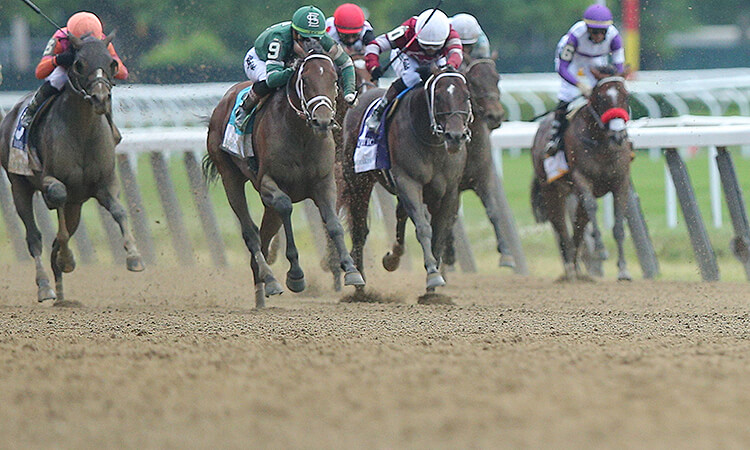