Rich Strike looks good, improving weather, and a celebrity backing the Belmont favorite — we've got the top storylines and last-minute news of note to prepare you for the 154th running of the Belmont Stakes tomorrow night.

The 2022 Belmont Stakes runs this evening, with plenty of intriguing storylines — ranging from Nest looking for a historic win as a filly and We the People as the favorite... to everybody breaking down Rich Strike's chances of winning again.

If you're still pouring over the Belmont Stakes odds and have bets yet to be placed, we've got a recap of the top storylines and latest news ahead of today's race at Pimlico.

Despite early morning downpours on Thursday, We the People and Rich Strike both schooled at the starting gate, with the former getting 1 1/2-miles of galloping and jogging in under trainer Rodolphe Brisset.

Thursday also saw Creative Minister, Skippylongstocking, and Barber Road hit the track for one of their final Belmont tune-ups, with all three galloping while under restraint.

Rich Strike and his connections have not followed a conventional path to stardom, and Eric Reed’s off-the-beaten-path training style has continued in the lead-up to the 154th Belmont Stakes.

After recording his final Belmont tune-up at Churchill Downs on May 30, Rich Strike was allowed to gallop two miles at Belmont Park at “far better than a two-minute pace” on Tuesday morning under exercise rider Gabriel Lagunes.

“We never try to make [Rich Strike] go any certain speed, and every once and a while he’ll do what he did yesterday,” Reed told reporters after the workout. “We’ll let him go for a little bit, but not for the whole way.”

The past performances for the Belmont Stakes bear out that We the People is the horse to beat. He’s the 2/1 morning-line favorite, and appears to be the only horse that will show any initiative coming out of the starting gate.

“The pace is a concern,” Todd Pletcher, trainer of Mo Donegal and Nest, told Bloodhorse on Tuesday. “The misconception is that deep closers do well in the Belmont, but that’s not always the case. Like all races, it can be pace dependent, and if they go slow, that can present a problem. It concerns me that We the People can be the controlling speed. If no one goes with him and he settles, he can be very dangerous.”

WE THE PEOPLE makes a statement with Flavien Prat! What a run in the Peter Pan (G3) ???? #BelmontPark pic.twitter.com/KLR53KWSAX

“It’s going to be real hard for us with our running style,” Reed said. “[Rich Strike is] ready to run, as ready as I can get him. He’s going to have to show more interest the first part of the race, I think, to really get the job done.”

Added Belmont Stakes-winning trainer Ken McPeek (who has entered Creative Minister): “Timing is everything in this race. It’s a rider’s race and it will be interesting to see how it unfolds.”

Bobby Flay buys into We the People

Celebrity chef and horse-owner Bobby Flay thinks We the People will give the Belmont field their “just desserts” on Saturday.

Flay purchased a minority interest in We the People earlier this week, telling reporters, “I’m thrilled to join the We the People team. I have been an admirer of this colt since he started his career at the beginning of this year.”

Bettors may recall that Flay made a similar move in 2016, purchasing a small stake in Creator, who went on to win the Belmont Stakes by a nose.

Despite some gloomy weather predictions for the Belmont Stakes earlier in the week, it now appears as though racegoers can leave their umbrellas at home.

The forecast calls for comfortable 75-degree conditions with some cloud cover, and only a light shower passing by in the afternoon, if at all.

A muddy oval would have theoretically handed the race to We the People, who crushed his foes in the Peter Pan Stakes last time out over a good, sealed Belmont main track.

He’s now projected to get a fast surface on Saturday. 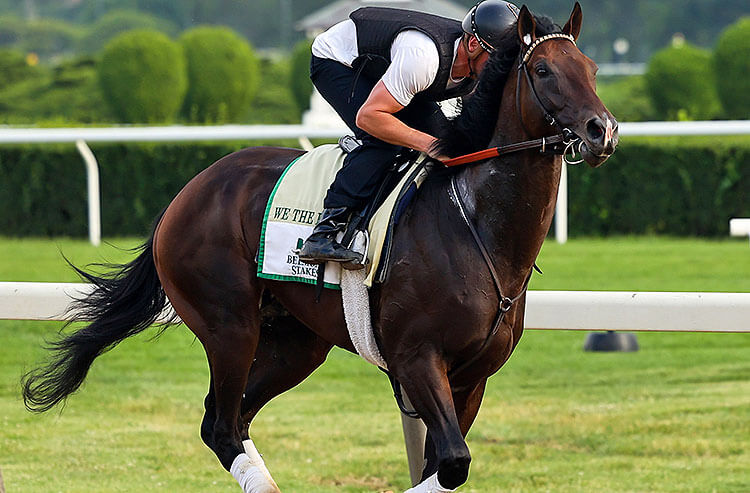