Belmont Stakes: The Case For and Against Rich Strike

Following his 80-1 upset victory at the Kentucky Derby, Rich Strike's next opportunity to shock the world comes at the 154th Belmont Stakes. Was his longshot victory a fluke or is he worth serious consideration once again? We break it all down below.

It’s hard to argue against Rich Strike being the most interesting member of the eight-horse field set to contest the 154th Belmont Stakes tonight at Belmont Park.

The shocking 80-1 Kentucky Derby winner flew in the face of tradition when his camp opted to bypass the Preakness Stakes – the second jewel of the Triple Crown – and train up to the demanding 1 1/2-mile Belmont. Now bettors have to determine whether Rich Strike is a three-year-old star in the making, or if his Derby win was just a fluke.

Let’s examine the case both for and against Rich Strike in the Belmont Stakes, and deliver our verdict below.

The case for Rich Strike

Rich Strike will wear saddle towel No. 4 for the Belmont Stakes, so he was assigned a decent post that should pose no problems. Breaking from the rail could easily have relegated him to last, as he doesn’t possess much early speed. An outside draw – something Rich Strike was able to overcome in the Derby with a much longer run into the first turn – could have seen him hung wide into the first of two sweeping bends at “Big Sandy.”

He was 80-1 in the Derby for a multitude of reasons, starting with a dirt form that was incredibly lacking, especially from a speed figure perspective. However, it’s not unheard of for horses to dramatically improve from age two to age three, so perhaps he was just a very late bloomer.

Rich Strike is by Keen Ice, who ran third in the 2014 Belmont Stakes behind American Pharoah. Keen Ice was sired by all-time great Curlin, who lost the 2007 Belmont by a head to Rags to Riches. Rich Strike’s dam is Gold Strike, a daughter of Smart Strike, one of the most influential sires in recent history. Pedigree won’t be to blame if Rich Strike comes up short in the Belmont Stakes.

Rich Strike was assigned third-choice status on the Belmont morning line at 7-2. The track oddsmaker does not make these lines based on his or her opinion, but rather predicts what the final odds will be when the latch is sprung for the race to the best of his or her ability. The 7-2 odds imply that if you’re betting Rich Strike, you won’t exactly be the only one at the track doing so.

Trainer Eric Reed also has Rich Strike working well in the mornings, as he fired a bullet five-furlong drill at Churchill going :59 flat on May 30, so the horse appears to be in good shape.

The case against Rich Strike

Rich Strike certainly did not hint at stakes-winning ability in his debut, when he finished last in a 10-horse turf field at Ellis Park on Aug. 15, 2021. Just one month later, prestigious owner/breeder Calumet Farm decided to cut bait with Rich Strike, entering him in a $30,000 maiden-claiming race at Churchill Downs. RED TR-Racing claimed him out of that win, and Rich Strike proceeded to go on a five-race losing streak across various surfaces and class levels.

Rich Strike barely had enough Kentucky Derby points to find his way onto the also-eligible list after finishing third in the Jeff Ruby Steaks, then got lucky to have Ethereal Road scratch in time for him to participate in the “Run for the Roses.”

His resume was arguably even lighter than that of Mine That Bird, a memorable upset winner of the Derby in 2009. At least he had won a Grade III as a two-year-old prior to stunning the racing world at 50-1 on that muddy May afternoon.

Rich Strike’s connections are practically anonymous, as neither Reed nor jockey Sonny Leon had ever accomplished anything in the Triple Crown series prior to five weeks ago. Though trainers like Todd Pletcher and jockeys like Flavien Prat lose more often than they win, it is still intimidating to see all the accomplished names in this Belmont field taking their best shots against Rich Strike.

A probable slow pace in the 2022 Belmont Stakes could also work against Rich Strike. He likes to do his best running late and benefitted immensely from being well behind a torrid early tempo in the Kentucky Derby.

We the People figures to go to the lead under Prat, much like they did in a winning Peter Pan effort, and avoid getting hemmed in at the rail. There is no clear and obvious candidate to go after him in the opening furlongs. If We the People is allowed to coast up front, it will make Rich Strike’s job that much more difficult on Saturday.

There are too many factors working against Rich Strike to make him an appealing wager in the 154th Belmont Stakes. Smart bettors should treat Rich Strike’s Derby win as a total fluke, and toss him completely from the win discussion.

Mo Donegal is favored to win the Belmont Stakes in 2022.

Take a look at the top horse racing betting sites available in your area.

The 2022 Belmont Stakes will feature some of the top three-year-old talent in horse racing, such as Mo Donegal, We The People and Kentucky Derby winner Rich Strike. 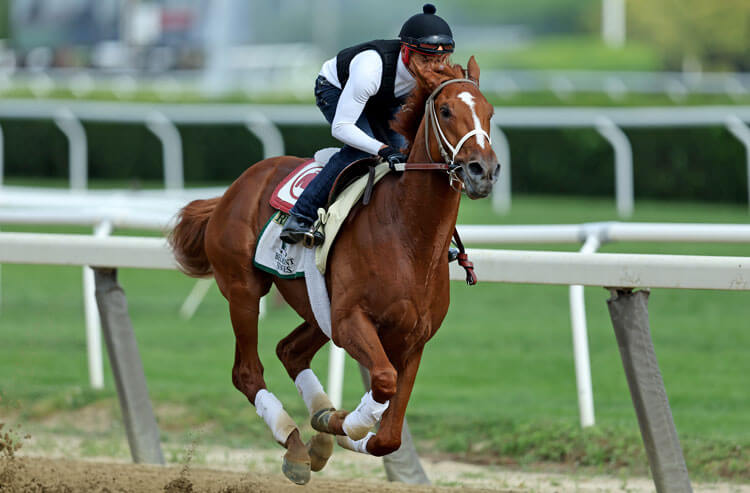 Belmont Stakes: The Case For and Against Rich Strike
Provided by