With almost no value on betting Team USA to win outright, our Presidents Cup betting picks do a deeper dive into the massive disparity between these two sides and why you shouldn't expect anything less than a dominant showing from the JT-led Americans.

Golf's secondary team event is finally here and if it plays out as the Presidents Cup odds suggest, we could be in for a one-sided affair.

Team USA is lined with your pick of the world's best and biggest superstars, including Justin Thomas and World No. 1 Scottie Scheffler, while Team International features mostly not-so-household names and second-tier PGA Tour pros.

Our Presidents Cup betting picks and predictions break down that huge disparity and highlight a couple of Americans primed to shine the brightest.

If you're signing up for a new sportsbook for the Presidents Cup, here are two of the best bonuses* available:

This may feel like a big margin at first glance but when you look at the makeup of these two lineups, it's not hard to see how this week could get ugly fast for Team International.

Not only is Team USA fielding five of the OWGR Top 10, but all 12 guys rank inside of the Top 25 including a couple of Quail Hollow winners in Justin Thomas (2017 PGA Championship) and Max Homa (2019 Wells Fargo). Only three of Team International's 12 golfers rank higher than Team USA's lowest-ranked Kevin Kisner. That's how huge the talent gap will be this week.

That's only made worse by the fact that World No. 3 Cameron Smith, Louis Oosthuizen, Marc Leishman, and Joaquin Niemann are all sidelined due to their association with LIV Golf. And while losing Dustin Johnson or Brooks Koepka may hurt the Americans, the gap between them and their replacements (Cameron Young, Billy Horschel, Homa, etc.) is so much smaller than that of those replacing Smith or Niemann (Si Woo Kim, Christiaan Bezuidenhout, Sebastian Munoz).

Talent aside, the Americans are on home turf (won by eight points the last time they hosted in 2017), have a plethora of team event experience and chemistry that Team International simply can't match, and are carrying with them the momentum of their 10-point stomping of the European Ryder Cup team not 12 months ago — a European Ryder Cup team that could just as easily dust this edition of Team International.

All signs point to this getting out of hand fast with the Americans threatening another double-digit victory.

While the form of Scheffler, Xander Schauffele, and Patrick Cantlay has them atop the board of this market, none embody the spirit of Team USA at team golf events more than Justin Thomas, and everything appears to be lining up for him to once again dominate.

Despite JT's so-so play at last year's Ryder Cup, he posted a 2-1-1 record worth 2.5 points, a mark exceeded only by Dustin Johnson (not playing this week), Collin Morikawa (entering in suspect form), and Patrick Cantlay.

In the 12 months since that event, Thomas has been rolling. He knocked off his second major win at the PGA Championship at Southern Hills and racked up eight Top-5 finishes in 22 starts this season. He also finished the season ranked third in strokes gained tee-to-green, fourth in total strokes gained, and eighth on approach.

Thomas is the emotional leader of this team and his play won't fail to back that up. He led this team in scoring back in 2019 (3.5 points, 3-1-1 record) and will do so once again at Quail Hollow.

This week provides Cameron Young with another opportunity to shine and impress. The now 18th-ranked player racked up five runner-up finishes among seven Top 3s in what will most assuredly be rewarded as a PGA Tour Rookie of the Year campaign.

He proved time and time again an ability to hang with the big boys with a game that passed nearly every single test in 2022 — leaving no doubt surrounding his spot on this team. His biggest asset is his driver, ranking second in strokes gained off-the-tee and third in driving distance, and he also ranked sixth in birdie average despite some middle-of-the-pack approach play and putting numbers.

With the Ryder Cup just around the corner, Young will be desperate to make the most out of this matchplay experience and should do just that assuming he draws matchups with the more vulnerable half of Team International's already weak lineup.

And if the Americans take care of business and pull away as expected, Captain Davis Love III could give his youngsters some additional run in the later stages, potentially allowing Cam to surpass the more favorable options in this market in Scottie Scheffler (+250), Collin Morikawa (+350), etc.

Zach Johnson (2023 Ryder Cup captain, assistant captain this week) will have his eyes peeled on what could be a Team USA regular for years to come and the Youngster won't disappoint. 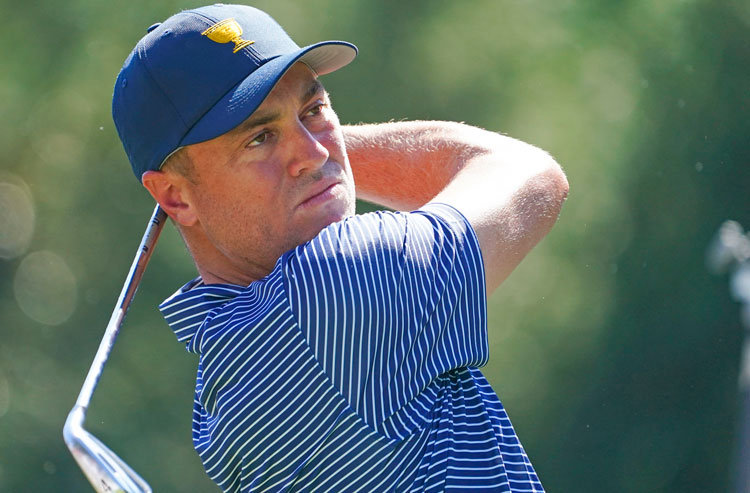