LIV Golf is back with this weekend's cut-free tournament at Trump National Golf Club. As a new wave of PGA imports creates a tougher field, how will the incumbent golfers adapt, and which are the best betting value? We like Lee Westwood — find out why.

Paul Casey, Henrik Stenson, Jason Kokrak, and Charles Howell III are among the next crop of PGA Tour players to join the LIV Golf series for its third event of the year at Trump National Golf Club in Bedminster, NJ from July 29-31.

The aforementioned group will compete among a 48-player field for the 54-hole, no-cut tournament, headlined by Dustin Johnson, who’s listed as the +500 favorite. Behind DJ on the odds board is 2020 U.S. Open champion Bryson DeChambeau (+950), who bounced back from a rough start to the season to finish eighth at the British Open, followed by World No. 22 Abraham Ancer (+1,200) and 2010 Open winner Louis Oosthuizen.

We look at the Trump National course and examine some of the favorites to contend in Jersey, along with a few sleepers, with our LIV Bedminster Invitational odds and predictions.

Bedminster has about as controversial a history as the LIV Golf series itself. The club was originally chosen to host the 2022 PGA Championship, until the PGA Tour revoked hosting rights after the January 6, 2021 attack on the U.S. Capitol building.

Located in Somerset County, the Old Course has been ranked in the Top 100 Courses in the World and features a number of bunkers, an abundance of water, and large, undulating bentgrass greens. Weather should be fairly calm this weekend, with the exception of rain showers forecast for Friday morning.

The two-time major winner just finished sixth at the Open Championship at the Old Course in St. Andrews and continues to improve on the LIV Golf Tour.

Johnson finished eighth, six strokes behind winner Charl Schwartzel, in the inaugural LIV event in London in mid-June. He followed up that performance in Portland with a third-place tie with Patrick Reed, finishing nine-under for the tournament, four strokes behind victor Branden Grace.

Ranked 17th in the Official World Golf Rankings, Johnson is the highest-ranked player among the 48-player field and has seemingly regained top form. He hung near the top of the leaderboard all four rounds of the British Open and ranked T op 20 in strokes gained putting, strokes gained off the tee, and strokes gained approaching the green for the event.

He’s trending in the right direction, especially considering Grace finished third in the LIV event prior to claiming his victory in Portland.

The 30-year-old Oklahoman has two Top 10s in his two LIV starts and comes in off a Top-40 finish at the British Open. Gooch ranked 21st in strokes gained off the tee for the major, but his irons were cold until Sunday's final round.

Gooch has one win on the PGA Tour this season at the RSM Classic and posted a pair of Top 5s and four Top 11s in his first four starts on the tour. His form dipped some in the spring, but he has the skill set to contend at Bedminster if he can get more consistent play from his irons and putter.

Like Johnson, DeChambeau had been struggling with form earlier in the season. The 28-year-old Californian missed four straight cuts at the Farmers Insurance Open, Valero Texas Open, Masters, and Memorial before he made the weekend at the U.S. Open and landed in a tie for 56th.

DeChambeau turned it all around at St. Andrews with a Top 10 in his fifth career British Open start. The one-time major winner was seventh in both strokes gained off the tee and strokes gained approach for the tournament, but his putter gave him trouble.

His flatstick will likely keep him from winning his second start in the LIV Golf series. In the LIV Portland event, he finished 10th at 2-under but shot 1-over in the final round.

The 25-year-old from Manchester missed the cut in his three major appearances at the Masters, U.S. Open, and British Open this year, but against a lighter field in Bedminster, he could put it all together.

Winner of the Soudal Open in May, Horsfield has been on fire on the European Tour. He tied for 12th in the Abu Dhabi HSBC Championship in January and placed fourth later that month in the Dubai Desert Classic. Injuries kept him off the course for the next three months, but he returned with a vengeance to tie for 21st at the British Masters in early May, before securing his win in Belgium.

In two LIV events, Horsfield finished fifth in London and tied for 11th in Portland. Look for him to bounce back from a rough outing at St. Andrews with another top finish on the LIV tour.

Another English player to look out for is Lee Westwood, who appears to be turning a corner in the second half of the year.

The 49-year-old missed three cuts in his first five starts on the PGA Tour but stepped up at Augusta to tie for 14th. Earlier this month, he put forth another solid effort in a major, finishing 34th at the British Open, with a strong performance both off the tee and on the greens.

Westwood’s play has been just as sporadic on the LIV tour. He finished 8-over in London to place 29th out of 48 players, then in Portland he tied for 16th at even par. If he can improve upon his form at St. Andrews against a smaller field in New Jersey, he just might spring an upset in the third LIV event of the year. 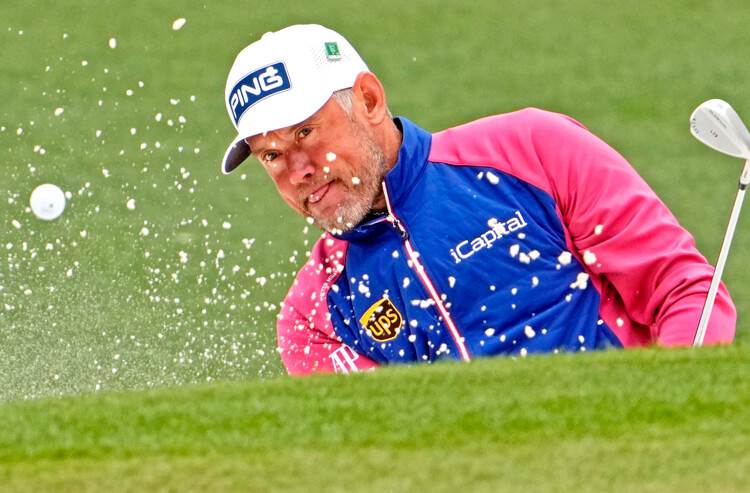